Even during this period of the pandemic, smartphone brands aren’t hesitating from bringing out new phones. The latest phone in the list is the Samsung Galaxy M11. And now, Samsung Nepal has brought the device to the Nepalese market. So, let’s check out the specs, price in Nepal, and availability of Samsung Galaxy M11.

Samsung Galaxy M11 will be the cheapest option among the devices under the M-series of 2020. It will be the third M-series device of 2020 after Galaxy M31 and Galaxy M21.

As of now, Samsung Galaxy M11 sports a 6.4-inch Infinity-O display. Infinity-O is the name given by Samsung for its punch-hole displays. The punch hole is on the top left corner of the screen and it houses the front camera. This TFT LCD panel packs in 720 x 1560 pixels. Similarly, the device is made up of polycarbonate material. On the back, we have a triple camera setup. The vertical arrangement of the camera reminds of last year’s M-series devices. There’s also a capacitative fingerprint sensor mounted on the back of the display.

Galaxy M11 is powered by Qualcomm’s Snapdragon 450 which we saw in the Galaxy A20s last year. This chipset is supported by 3GB of RAM and 32GB of internal storage. There is also a 4/64GB variant of the device available to choose from but that variant is not currently available in Nepal. The phone ships with Samsung’s One UI 2.0 on top based on Android 10.

Multiple cameras on the back are the trend these days, even in the budget segment. So, Samsung has included a triple camera setup on the back of Galaxy M11. The primary 13MP camera comes with Auto Focus. It is accompanied by a 5MP ultra-wide sensor and a 2MP depth sensor. On the front, there is an 8MP selfie camera with an f/2.0 aperture. 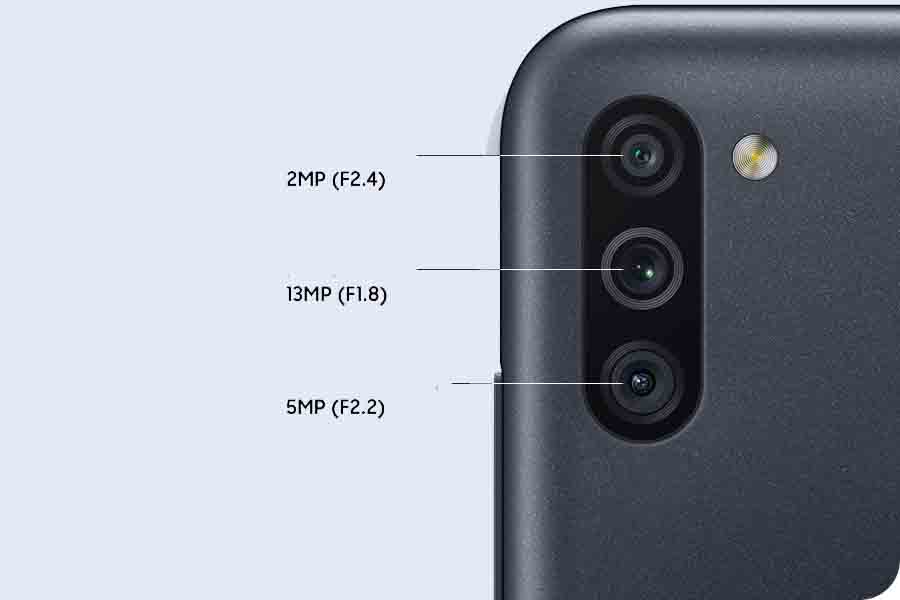 The phone features a massive 5,000mAh battery which is pretty uncommon in this price segment. The battery supports 15W fast charging technology through the type-C port. Thankfully, the fast charger comes inside the box itself! Galaxy M11 also comes with support for 4G connectivity, WiFi 802.11 b\g\n, and Bluetooth 4.2

Samsung Galaxy M11 was launched in Nepal for a price of Rs. 18,999. However, you can buy now for just Rs. 17,899. This price is for the 3GB RAM, 32GB storage variant. You can buy the Samsung Galaxy M11 starting today (June 25) from retail mobile stores and Samsung brand shops throughout Nepal.

Don’t forget to check out our review of Redmi 8 and Redmi 8A!