Soon after Poco spun off to an independent brand, their launches have been really boring, no offense. The main reason for it is how the company has just been rebranding its sister company Redmi’s phones and launching them with a different name. You can learn more about why companies do this, right here. Anyway, the Poco X3 NFC is now available in Nepal and we’re here with its review.

This, btw, is Poco’s first phone after going independent to use an original design. But, I think the company somehow went backward and missed the mark altogether in terms of how the phone should look and feel. So far, we’re not off to a great start. 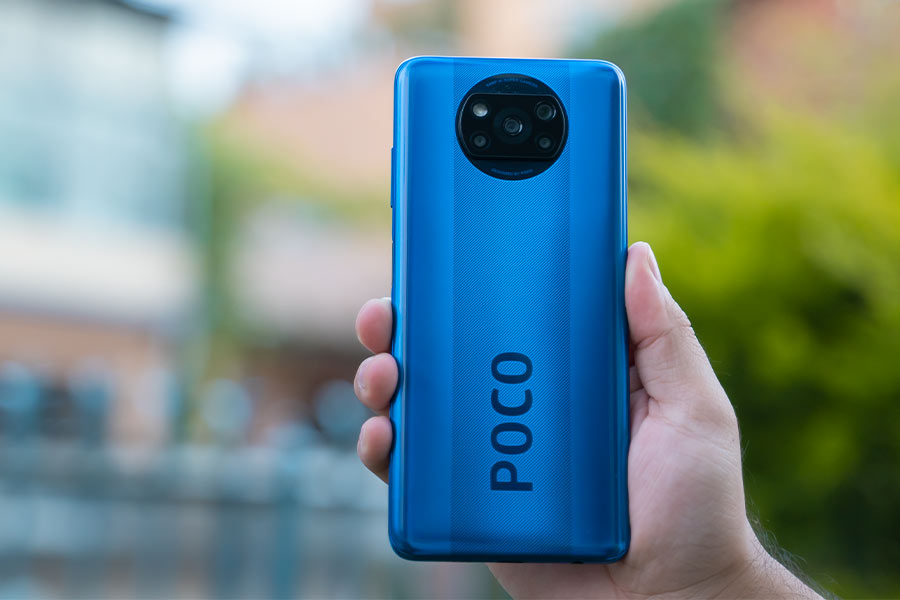 As you can see, the back has this big “Poco” branding which looks a little ugly in my opinion. I am also not a big fan of this camera module. So, what should have Poco done instead? Well, as Dwight Schrute puts it, “K-I-S-S. Keep it simple, stupid.”

Poco X3 NFC’s rear panel is also plastic, which is a downgrade from the Poco X2 that had a glass back instead. But, given the poor history of Xiaomi phones being prone to bend, Poco has included a metal frame here. As a result, this should provide better durability and overall sturdiness. Here, the metal frame on the right is home to an always-on fingerprint sensor, which is as fast and reliable as any side-mounted fingerprint sensor we have seen.

The opposite of compact & lightweight

But, my main concern with the design of the Poco X3 NFC is that it’s too heavy and thick. It weighs 215 gms and measures more than 9.4 mm in thickness. Just for comparison, the Oppo F17 Pro is 7.5 mm thick and weighs just 164 grams.

I know much of this is because of X3’s big 5160mAh battery. Yet, we know that the Samsung Galaxy M51 has a 7000mAh battery and is still lighter and thinner than the Poco X3. So, when using the phone continuously for an hour or so, which most of the time I have done while review this, trust me, your hands will feel a little lethargic with all the heavy lifting.

Moving on, there’s also a separate Indian variant which is even bulkier thanks to the bigger 6000mAh battery. Apart from that, everything else is the same. On the front, Poco has included a built-in screen protector this time, which if you remember the Poco X2 lacked. Apart from that, you also get Gorilla Glass 5 protection. Surprisingly, it is also IP53 dust and splash-proof, which is always great to have at this price range.

What’s even great is the display. Like the Poco X2, the X3 has a 6.67-inch IPS panel with a 120Hz refresh rate and a tall 20:9 aspect ratio. Yet, Poco has improved the display in two aspects. First, It got rid of the pill-shaped notch to a more minimalistic punch hole and secondly, the touch sampling rate has been improved from 120Hz to 240Hz, which provides for a better touch sensitivity while playing games. Likewise, for an LCD panel, the phone’s colors and contrast are quite good. Brightness is sufficient too and during the review, I had no visibility issues on the Poco X3 NFC even when using it outdoors. The viewing angle is good too, so you will enjoy watching video content while lying on your bed. There are also different color schemes in the display settings, of which the Standard mode will yield you the best color accuracy. You can also tweak the color temperature to your liking. This display also supports HDR10, so you can enjoy high-def HDR10 content from all the popular streaming services.

But, the Poco X3 NFC does have an issue with the display front. Here, the 120Hz refresh rate is all great, but when scrolling through the Google Feed cards or the multitasking tab, you will instantly notice the display stutter. Similarly, if you’ve used a flagship phone with a 120Hz refresh rate before, you will spot the difference in scrolling immediately. I don’t know what’s causing this—is it because of a mid-range chipset that’s powering the phone or just the panel itself. Or maybe Poco plans to optimize it eventually… I don’t know.

Moving to the performance, the Snapdragon 732G has been so far so good. Although Poco says it’s the most powerful Snapdragon 700 series 4G processor to date, the difference between this one and the last-gen Snapdragon 730G or even the 720G is very negligible.

That being said, the higher clock speed of the CPUs and GPUs on the SD732G means I was able to get slightly better performance while playing high demanding titles. In PUBG Mobile, I was able to get around 45fps in smooth graphics and ultra-frame rates and it is slightly smoother than the Realme 7 Pro. 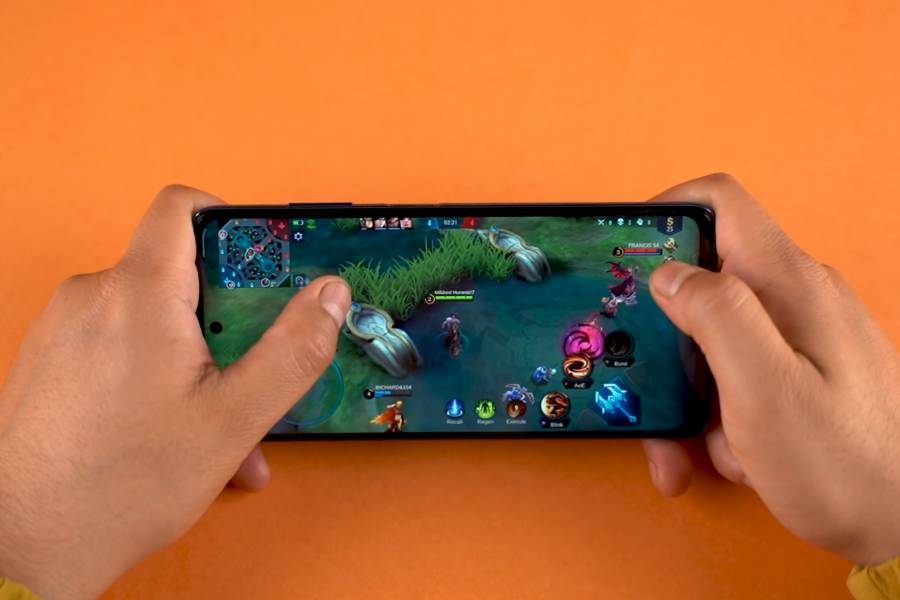 Similarly, I noticed a little bit of lag while playing Mobile Legends: Bang Bang on the Realme 7 Pro, whereas the Poco X3 NFC delivered smooth performance. Call of Duty Mobile maxes out at very high graphics/frame rates and the gameplay is really good.

However, most of the games are not optimized to run at 120fps even at the lowest of settings. There are few titles like Critical Ops which is optimized, but don’t expect other popular titles to run at high fps anytime soon as we are dealing with a mid-tier chipset here. And with practically every other company (except for Apple) launching so many devices every now and then, it’s implausible to think they can deliver Apple’s level of software commitment.

So obviously, they are not going to optimize these games on the older models and kinda betray you in the end. That’s just a harsh reality of software support on midrange phones.

Speaking of software, the Poco X3 NFC runs on Xiaomi’s MIUI 12 with the Poco launcher on top and I must say that I enjoyed using it throughout the review. So, the software experience is like any other Xiaomi phone. You still get some ads in default apps like music or file manager. At the time of writing this review, my unit of the Poco X3 NFC is running on September’s security updates and I haven’t received the October security patch yet. So, I am hoping this is one area Poco could eventually improve. 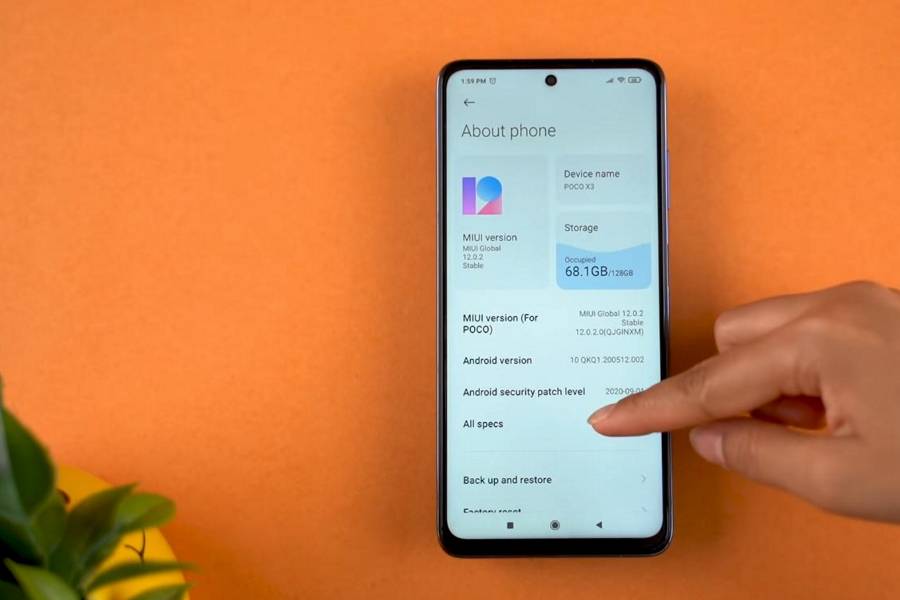 As for the heating, I didn’t notice any kind of heating issue while doing normal tasks like browsing or using social media. However, the phone does get a little warm when playing heavy games. But, the cooling system here is quite good as it dissipates the heat quite easily.

Finally, let’s move on to the cameras. As expected, you get a quad-camera setup featuring gimmicky macro and depth sensors. But, Poco has included a much better 13MP ultra-wide-angle lens and a new 64MP Sony IMX682 primary lens.

The 13MP ultra-wide angle lens is a welcome addition on a phone of this price.

It is much better than the mediocre 8-megapixel lens you find on Realme or Xiaomi phones. And you will notice the difference in quality right away. Comparing it against the Realme 7 Pro, the Poco X3 NFC’s images have better details with good colors, whereas the one from the Realme 7 Pro comes out unnatural.

With this new 13MP sensor, you can also shoot 4K 30fps and 1080P 60fps videos and across all the resolutions, it has better stabilization than any other phone in this price bracket.

Talking about the quality of the primary camera, I must tell you that they are very good for the price.

If there’s uniform lighting, the images turn out with excellent details, colors, and sufficient dynamic range.

Poco X3 NFC also optimizes the exposure in its images, but at times, the dynamic range is slightly compromised.

So, turning on the HDR will bring out more information on the overexposed parts.

However, there’s an issue while trying to focus closer on objects like leaves or flowers, which as you can see from these samples, Realme 7 Pro nails it.

Likewise, Poco has also improved its optimization when it comes to nighttime images.

You can even use the software-based Night Mode which improves the dark areas and brings out more details in the images.

Sadly, the night mode feature is not available on the ultra-wide-angle lens.

Moving on to the portraits, it’s pretty much on par with what other phones at this price range are offering.

It has good subject focus and background blur but struggles in edge detection on difficult parts like hairs and such.

The one aspect that could have been better is the background exposure, which the Realme 7 Pro maintains better.

The selfie portrait on the other hand is much better on the Poco X3 NFC than the Realme 7 Pro. I also like the normal selfies from the former.

Although, there’s a noticeable red tint on the skin along with a not-so-good exposure control if you are taking selfies on a bright sunny day.

For vlogging, the front camera can only shoot in 1080P resolution at 30 frames per second. That too without any kind of stabilization.

However, at the back, even the 4K 30fps, and 1080P 60fps footages get stabilization—all thanks to the gyro-EIS. There’s a noticeable lag and jitter if you try to pan or slide the 4K footages though. So, the best resolution to take the videos on Poco X3 NFC, which is true for all the midrange phones, is at 1080P 30fps.

Overall, the cameras are on par with the competition with better ultra-wide-angle-lens and I think eventually Poco will make the cameras even better with software updates.

Another good thing about the Poco X3 NFC is its battery life. Its 5160mAh battery can easily give more than a day of use. I got around 8 hours of onscreen time and for a heavy user like me, this number is quite astonishing. Poco has also included a 33W charger inside the box that charges the phone from 0 to 100% in 1 hour 35 mins, which is honestly quite fast if you consider that it’s charging such a big battery. Similarly, the stereo speaker on this thing is really good. It can get pretty loud with a decent level of clarity and bass. However, the mids are a little subdued.

So, that was my long-term impression/review of the Poco X3 NFC. It’s certainly not the perfect midrange phone that I hoped for, given the fact that Poco X2 was almost there. The company did bring a fair share of improvements with the Poco X3 NFC in the selfie camera, the ultra-wide-angle lens on the back, and a minor performance jump. But, the design is something not that good about this phone and instead of giving us a big 5160mAh battery, I would have rather preferred a sleek and lightweight phone instead.

Overall, if you are in for an all-rounder midrange phone and can live with the heft, the Poco X3 NFC is a no-brainer. And here in Nepal, it just doesn’t get better than this. Moreover, it’s the perfect choice for those looking for a great gaming smartphone, but don’t have the budget to spend on a premium gaming phone. That being said, we can’t thank Poco Nepal enough for pricing the Poco X3 NFC competitively and more importantly, bringing the phone to our country.