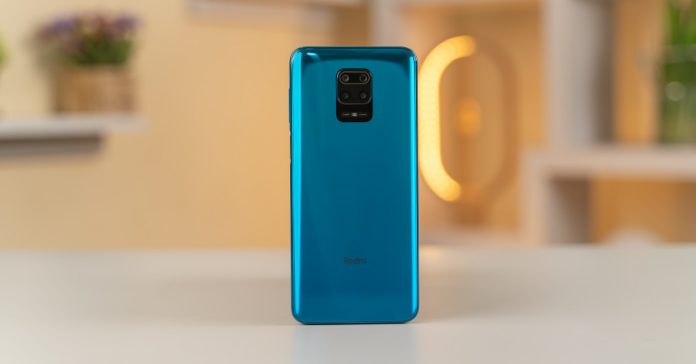 As expected, Redmi has continued the legacy of a premium build quality on its Note series of smartphones. Just like the Note 8 Pro from a year ago, the Redmi Note 9 Pro Max looks premium because of the glass back. Precisely, Xiaomi has opted for the same Gorilla Glass 5 protection for both: front and back of the phone. The frames are all made up of plastic but, from a distance, they can trick you into believing they are metals because of their glow.

The curved edges of the phone make it comfortable to hold in spite of its size. The phone is available in three color options – Aurora Black, Glacier White, and Interstellar Black. Since it is made up of glass, the rear panel is prone to fingerprint marks. Fortunately, Redmi includes a protective case inside the box. Talking about protection, as I mentioned earlier, the device has Corning Gorilla Glass on the front, back, and even on top of the camera.

As with its non-Max sibling, the Redmi Note 9 Pro Max has P2i water-repellent coating. While we obviously can’t expect Xiaomi to endorse an official IP certification on a phone of this price point, the P2i nano-coating couldn’t be more useful. Throughout my usage (of more than 5 months), the phone has held up pretty good. Even with multiple instances of falls, bumps, or splashes, it stands unshaken. I’ve been using the phone with the plastic back case that comes inside the box, which can, to some extent, be credited to the enhanced durability.

Likewise, you get a fingerprint sensor on the right side of the device. Typical of a mid-range Xiaomi phone, this sensor itself is fast and accurate. Furthermore, its placement on the side frame instead of the rear panel also adds to the modern aesthetics of the phone. All in all, Redmi Note 9 Pro Max is an incredibly well-built smartphone with a premium glass front/back. The only thing that bugged me a little is its width as I would’ve preferred a slightly slimmer device.

Moving on to the display, Redmi Note 9 Pro Max features a 6.67-inches IPS panel with FHD+ resolution. The screen has a minimal punch-hole cutout on the top center to house the front-facing camera. For an LCD panel, this display can get admirably bright and has decent color vibrancy and contrast. Still, they lack the quality of an AMOLED screen that you get in mid-range devices from other OEMs like Samsung. Moreover, Note 9 Pro Max also supports HDR10 and Widevine L1 DRM, which means you can enjoy HDR content from popular video streaming platforms like YouTube, Netflix, Amazon Prime Video, and more. While not absolutely making up for the lack of a punchier AMOLED panel, the way Xiaomi tries to compensate for the fact is quite remarkable.

On the other hand, there is still no support for a higher refresh rate on a Redmi Note phone. The 60Hz refresh is a little underwhelming at a time when users can get the Realme 7 with a 90Hz panel around the same price range. That being said, the company has launched Redmi Note 9 Pro 5G in China with a 120Hz refresh rate, and if rumors are to be believed Redmi might rebrand it as Mi 10i or Redmi Note 10 Pro in the international market.

Under the hood, the Redmi Note 9 Pro Max packs in Snapdragon 720G. Based on the 8nm process, the 720G is both powerful and power-efficient. And during my time with the device, I didn’t face any overheating issues either—as expected from a Qualcomm silicon. You won’t face any lag or stutter during normal usage. Apps load up quickly and the phone fares will during multitasking as well, all thanks to the spacious amount of RAM inside. To note, my unit boasts 8GB LPDDR4x RAM with 128GB of UFS 2.1 internal storage. Let’s talk about gaming on this phone. While playing PUBG Mobile, you crank up the setting to up to Smooth graphics and Ultra frame rate. Under this, I didn’t notice any frame drops or stutters during gameplay. Similarly, COD Mobile works well and offers decent frame rates. I even tried playing Genshin Impact at High render resolution and 60 FPS. While I didn’t face any issue with the gameplay, I did notice the phone getting warm after around 20 minutes of gaming.

While the performance side of things is pretty good on the Note 9 Pro Max, especially in the thermal department, one could argue that Xiaomi could’ve taken things a step further with a slightly more powerful chipset. Given how the performance difference (barring thermals) between the beloved Helio G90T and Snapdragon 720G is pretty minimal, I was slightly let down by the lack of a significant performance jump between the two iterations.

In terms of software, my unit ran on MIUI 11.0.4.0 when I first got it. I received the MIUI 12 update back in the first week of October and the UI has gotten a lot better with this update. As we know, MIUI is a pretty heavy Android skin with all the native apps and customizations that come embedded. Because these native apps occasionally play ads, I highly recommend you go with their alternatives from the Play Store. Likewise, the MIUI 12 update added a new control center/notification shade which looks to have been inspired by iPadOS. The Music app has a separate watch section where you can select YouTube to enjoy background playback as well. In spite of the improvements it brought over MIUI 11, it is still not optimized properly. At times when I tried to open the home center from the Home Screen, it would instead trigger the controls to the Home Screen.

Having said that, it’s a pretty minor issue that can be fixed with a software update. And we hope the company pushes an OTA update pretty soon. Except for a few issues, I liked the user experience of the MIUI 12 and I’m confident that the device will receive MIUI 12 based on Android 11 update pretty soon—seeing how the regular Redmi Note 9 Pro has already got the said update.

Moving on to the cameras, Redmi Note 9 Pro Max flaunts a 64MP quad-camera setup on the back. Complementing it is an 8MP ultra-wide, a 5MP macro, and a 2MP depth sensor. Likewise, you get a 32MP front-facing camera on this device.

The images from the primary camera are bright, vibrant, and sharp.

Photos can turn out slightly oversaturated at times but at a glance, that may actually be what most people are looking for.

Moving on, images from the 8MP ultra-wide camera, on the other hand, are lacking in terms of details and dynamic range.

At times, it shoots pretty color inaccurate images too.

The portrait camera struggles with edge detection and HDR. The latter is even inferior to that of Realme 7.

But still, the images are not downright awful and look good overall. Users can even change the F-stops in the camera UI or through the gallery.

The 5MP macro camera is a fun one to have. Surprisingly, the details on the macro shots are better than what I expected.

While one would be quick to dismiss this sensor as gimmicky in most cases, it was a pleasant subversion to find it working decently.

Likewise, the images from the 32MP front camera are well exposed and detailed. On the other hand, the portrait shots from the camera are soft and the background looks overexposed.

The gallery offers a lot of options to edit photos. For instance, one can change the sky in the photos. There is also an erase tool that has a healing effect on the photos.

With the Night mode on, the 64MP sensor captures good details, color, and dynamic range.

However, the image size becomes bigger than that of normal images.

The Redmi Note 9 Pro Max is capable of recording up to 4K 30fps videos with stabilization.  You can even record 1080p 60fs videos, although you will have to scale down the settings to 30fps to make for the image stabilization to kick in. The phone can record slo-mo up to 180p 120fps. Alternately, one can also choose to record 720p slo-mo videos at 960fps.

The side-mounted fingerprint works well but at times the phone would just freeze at a blank home screen. The issue has since been solved with the MIUI 12 Update. Face Unlock feature may not be as secure as the fingerprint sensor but it is quick and works pretty well under low light conditions too. At the time of writing this review, my unit of the Redmi Note 9 Pro Max has received September’s security patch. Xiaomi doesn’t particularly have a good track record when it comes to timely software updates, so I can’t say I’m surprised by this delay.

Getting to the audio, Redmi Note 9 Pro Max bears a single bottom-firing speaker. As it is with mid-range smartphones, it is just about average and is comparable to one on the Samsung Galaxy M31. It is enjoyable enough for watching videos and playing games. However, it won’t amaze audiophiles. As is the tradition with Redmi phones, the company doesn’t ship a 3.5mm wired earphone inside the box. Powering the Redmi Note 9 Pro Max is a big 5020mAh battery. Paired with a power-efficient Snapdragon 720G, the battery backup is incredible. In my normal usage, I got screen time of up to 6-7 hours on heavy usage. I used the phone for video streaming, light gaming, and social media. With this, I had to plug in the charger at the end of the day. On an even more lightweight usage consisting of messaging, calls, and browsing social media, the phone lasts up to 2 days on a single charge. Obviously, the battery endurance will vary depending on what you plan to do with the device.

The phone ships with a 33W fast charger which can fill the device from 0 to 90% in an hour. The whole charging process is completed in 1 hour and 15 minutes. And while you don’t get an earphone inside the box, Xiaomi has been generous enough to ship the 33W fast charger with the phone itself.

Wrapping up our long-term review of the Redmi Note 9 Pro Max, what I can confidently say is that this is a very well-built phone that offers great performance, amazing battery life, and so much more. But in this climate, there are better competitions. Ironically, one from Xiaomi’s own arsenal of smartphones—or rather, from its sister company POCO. The recently launched POCO X3 NFC brings so much more to the table for a similar asking price. For instance, a faster processor, 120Hz refresh rate, and maybe even slightly better cameras.