Home Samsung Official: Back from the dead; Samsung Galaxy Note 7 to go on... 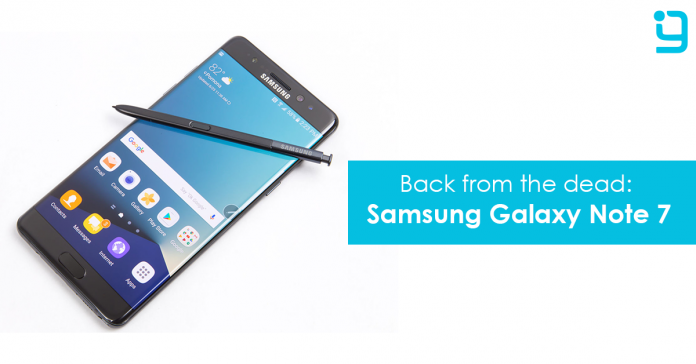 Samsung Galaxy Note 7 was arguably the best Android smartphone when it was launched last year. It constituted some of the beastly specs and was supposed to be the perfect rival to the iPhone 7 and Google pixel, devices that were not released at that time.

But it quickly became a burning sensation – literally. Problems with the batteries made the Korean giants recall the device not once but twice. In the end, the company had to kill everything associated with the Galaxy Note 7, a move that cost them a whopping 3 billion dollars. They also lost their bragging rights to other smartphone manufacturers.

And fans were, of course, disappointed.

Samsung explained why the Galaxy Note 7 exploded, a few months ago. And before their investigation had concluded, an official at the company had mentioned that they would be “Reviewing possible options that can minimize the environmental impact of the recall.”

this year. To make this happen, Samsung will establish three principles to ensure that Galaxy Note 7 devices are recycled and processed in an environmentally-friendly manner. Here are the 3 principles:

Well, since the Note 7’s production has been already ceased, Samsung might sell refurbished devices that will be equipped with a smaller-than-before battery. And it might also come with other tweaks. We will be reporting on this matter once other rumors surface on the internet.

Samsung surely wants to make up for the 3 billion dollars it lost due to the note 7 fiasco. It could also be facing penalties in relation to the disposal of the huge number of the devices. So, it is necessary for the company to take care of the 2.5 million units of the Galaxy Note 7 it has been left with.

Here’s everything you need to know about the (original) Samsung Galaxy Note 7: