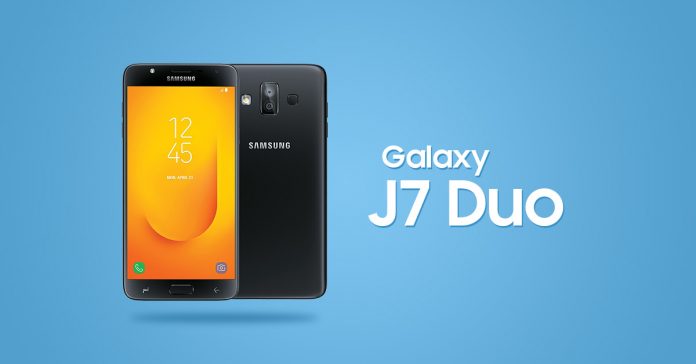 After launching the Samsung Galaxy S9 and S9 plus, Samsung seemed to have focused on nothing but them. Looks like Samsung finally has gotten over their latest flagships and shifted their attention towards other smartphones. Samsung has launched the Samsung Galaxy J7 Duo as a member of their affordable J7 series.

This new mid-range smartphone from Samsung was officially unveiled in India a few days back and now it has been launched in Nepal too. The J7 Duo comes with a Super AMOLED display panel with HD resolution and 16:9 aspect ratio. It sounds very odd that smartphones still come with that traditional aspect ratio and an HD display at this price range makes no sense. However, Samsung has included a dual rear camera of 13+5 MP that can now take portrait shots. The selfie camera is 8 MP snapper. All the three cameras feature f/1.9 aperture lenses.

The front camera also supports face unlock so that you can unlock your phone with just a quick glance. Similarly, the device comes with Samsung’s app pair feature that lets you work on two apps at the same time.

Performance is an where Samsung has done an excellent job. It features a powerful Exynos  7885 octacore processor. There’s 4GB of RAM and 32GB of onboard storage with dedicated microSD card support.

What do you think about the pricing of the Samsung Galaxy J7 Duo? Let us know if you think its a good buy for Rs. 28,890 in the poll: