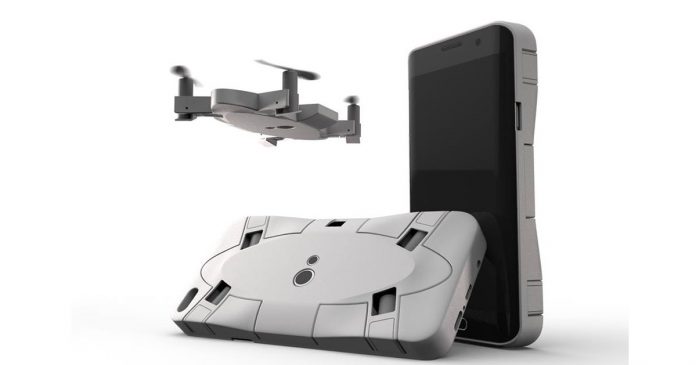 Ever had a problem that your selfie stick wasn’t long enough? Or wanted a dope cover for your phone that could fly? Well, the new “SELFLY” drone is here to fix those.

SELFLY is a drone/cover for your smartphone. It’s basically a foldable selfie drone packed into a phone case. What it’s supposed to do is let you take a selfie of yourself and from angles, you didn’t think possible.

All you need to do is take the drone out of the case and the drone will start hovering automatically. Then you can control the drone through the app.

How good is the camera?

There is basically an 8-megapixel camera that can also do 1080p video recording at 30 fps. You can point it in any direction you want from the app itself. They are promising a high-end stabilizing technology as the drone will be flying while taking your selfies.

Yes, Selfly drone will also double as your phone case. The case that holds the drone can be easily altered to fit 4-6 inch phone. And if you happen to own an iPhone6, 6 Plus, 7, 7 Plus, Galaxy s6 edge, S7, S7 edge, or a Nexus 6 your device will be getting a dedicated case.

The company said that they are looking to enable an open developer platform so that anyone can program commands for the drone. Other than that the drone will be controlled by an app on your phone. They will also be adding facial recognition technology in the near future.

The Selfly drone is going to be 9mm thick. That’s 9mm added to your existing smartphone. This isn’t the worst thing but it’s till very bulky. Other than that it has 640mAH battery inside. That really small providing about 5 minutes of flying time. Now, the company’s CEO hopes to add wireless charging to the drone. Other than that there’s a Micro USB port. The drone is also very noisy. That will be an issue depending on the situation.

The drone will cost $100 on Kickstarter, and $140 retail. Now for Nepal, this price might hike a bit. It’s expected to start shipping in June this year