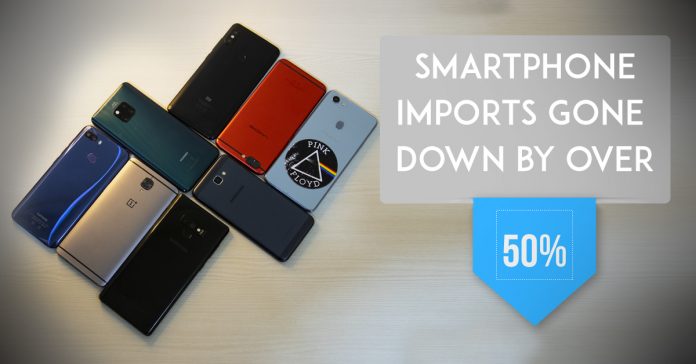 After Nepal governments decision to impose an additional 5% excise duty on the import of smartphones, smartphone import have gone down considerably in Nepal. This should not come as a surprise, however. Everyone was unhappy regarding this decision. Before this excise duty, smartphone retailers only had to pay 13% tax on smartphones. And on top, there was 40% of rebate offered to them on those taxes. Which made it about 7.8% net in taxes.

But now, with the added 5% excise duty, and the rebate taken away, retailers pay a total of over 18% tax on smartphone import. Which has reduced the import of smartphones – at least legally. But the increase in grey market imports shows that many retailers might have resorted to importing these goods illegally. And this is more evident by the increase of new smartphone retailers in recent times.

Also Read: Why are smartphones overpriced in Nepal?

According to data from Birgunj Customs office, the import of phones has gone down by 50%. While the number of phone imports last fiscal year was 2,49,280 in a period of 6 months, this year the number rested at 1,10,700 in the same amount of time. According to customs officials, the number has decreased due to the additional excise duties and revoking of the rebate.

Sources also claim that since there is less strict checking at open border areas, many phones make it inside Nepal illegally. And when many smartphone shops shut down during a raid by the officials, it only confirmed the suspicions.

Meanwhile, the Mobile Phones Importers Association (MPIA) has issued a letter that they will be carrying out necessary steps to discourage grey importers and illegal means. They claim that even if grey imports are beneficial to some, and while some consumers may get phones for cheap, it hurts the nation’s economy overall. Also, there is no surety of warranties, maintenance and such. All, of this, is true for the most part as well.

They announced they would warn all grey importers. And there would be legal actions to those who do not comply and will not receive any support from the Importers Association. This would mean that any retailer with grey market supplies would not get any kind of warranty facilities, phone imports or will not be made part of any schemes.

Will this help the current trend of smartphone import and high pricing in Nepal? Only time will tell, but for now, we have yet to see the policies implemented in action.