When it comes to videography, Sony a7S II has been one of the best cameras for quite a time now. The company announced its successor, the Sony a7S III back in July last year.  And now, the camera is available in Nepal for a discounted price. Let’s check out the specs, official price, and availability of the Sony a7S III mirrorless camera in Nepal.

Sony’s a7S was launched in 2014. It was widely acclaimed for its low-light performance. The maker replaced it with Sony a7S II a year later. Videographers loved it as it supported internal 4K UHD video recording. The a7S II wasn’t much different from the a7S except for internal 4K recording, in-body stabilization, and few changes in the design. Both featured a 12MP CMOS full-frame sensor.

The new a7S III comes with a 12.1MP Exmor R sensor. Sony says that the CMOS sensor along with the BIONZ XR processing engine improves color reproduction and texture rendering while still maintaining the sensitivity that the a7S lineup is known for. Sony has lowered the base ISO to 80, thus the normal ISO range on the a7S III is 80 – 102,400. It can be stretched to 80 – 409,600 for video and 40- 409,600 for still shots.

Earlier last year, Kenji Tanaka, an executive from Sony, revealed in an interview that the ability to record 4K videos at 60fps has been the most demanded feature from the users. Now, Sony a7S III can shoot 4K videos up to 120fps. Similarly, 10-bit 4:2:2 video capture also makes its debut. The camera supports 4K 60fps 16-bit RAW video capture via the HDMI Type- connector as well.

Talking about the design, Sony has redesigned the grip for better comfort. The new design also offers better protection against dust and moisture. Sony also added a heat dissipating structure that doesn’t require a fan or cabinet vents. The company claims that it can dissipate heat effectively and keep the temperature low even while recording at 4K 60p 10-bit 4:2:2 for over an hour. 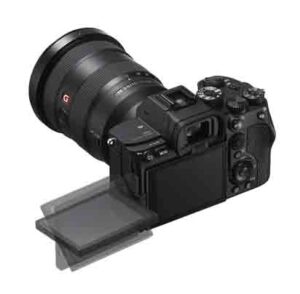 a7S III is the first in the series to offer hybrid autofocus. It comes with 759 AF points that cover around 92% of the sensor. The combination of phase and contrast detection allows the user to track subjects even with a narrow depth of view. The Real-time Eye AF now has 30% better performance and it is activated automatically when the system detects an eye.