Vivo Nepal has been teasing the launch of Vivo V20 through its social media handles. Newly appointed brand-friend Pradeep Khadka also starred in the count down video. The device is part of the V20 lineup that debuted at the end of last month. Though there are two more devices in the lineup, the company has only launched the vanilla V20 in Nepal for now. Let’s check out the specs, features, official price, and availability of Vivo V20 in Nepal. 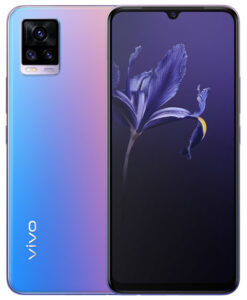 Vivo V20 sports a 6.44-inch FHD+ panel like the one in the Pro variant. It is an AMOLED panel with a pixel density of 408PPI. It is a tall device with an aspect ratio of 20:9. The contrast ratio of the panel is listed at 2000000:1. However, there is one difference that separates the front of the vanilla and Pro model. While Vivo V20 Pro features a traditional iPhone-like notch, the vanilla V20 has a waterdrop style notch instead. Other than that, the device sport a 2.5D curved design and has a thickness of around 7.38mm. Similarly, the phone weighs around 171 grams.

From the back, both phones look the same. Vivo V20 also features AG Matte Glass back panel, which is chemically etched to reduce scratches and make it feel better on hand. Vivo has added an AF coating on the top to make the panel less prone to smears and fingerprints as well. The device will be available in three color options – Midnight Jazz, Moonlight Sonata, and Sunset Melody.

Under the hood, Vivo has included Qualcomm Snapdragon 720G in the Vivo V20. It is clearly a step down from the 5G enabled 765G in the Pro variant. Still, 720G is a gaming-focused mid-range chipset and it supports limited features of Qualcomm’s Elite Gaming Technology. The device will be available in a single memory configuration – 8GB RAM paired with 128GB of internal storage.

To further boost the performance, Vivo has also updated the multi-turbo engine with ART++ Turbo. However, we don’t get to see the Vapor Chamber Colling system that is in the Pro model.

At the back, we get to see the X50-inspired rectangular camera bump that houses the triple camera setup. The camera specs are the same as that of the Vivo V20 Pro. We are talking about a 64MP primary camera accompanied by an 8MP multi-function camera. The latter is capable of taking wide-angle with FOV of 108-degree (after considering the distortion). Users can also use it to take macro shots of objects as close as 2.5cm. The third senor is a 2MP monochrome sensor. The device uses it for the Art Portrait Video in which the background is turned into black and while the subject still remains in colors. The rear camera supports Super Night Mode, Tripod mode, Smart Zoom, and Motion autofocus. On the front, the device features a 44MP selfie camera with the ability to focus from 15cm. Users can record 4K videos using the selfie camera as well. Other supported features include Steadiface Selfie Video, Dual-View Video, Slo-Mo video, and multi-style portrait.

The battery specs also remain the same. Like the Pro variant, the vanilla V20 comes with a decent battery of 4,000mAh battery while retaining the 33W fast charging support. It ships with Funtouch OS 11 based on Android 11. An optical fingerprint sensor is placed under the AMOLED screen for biometrics as well.