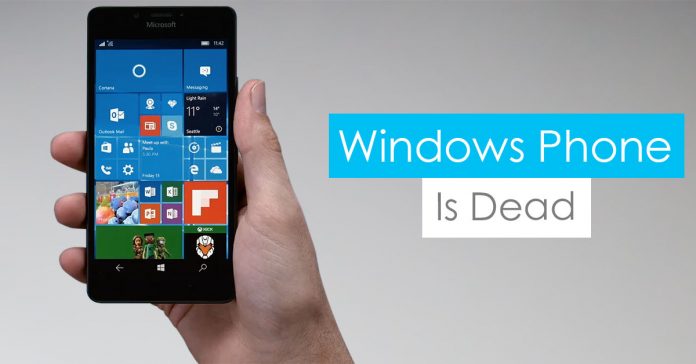 Windows Phone was destined to die since the early beginning days of Androids and iPhone. They did share their good share of momentum, as well as a few dedicated fan following. We even thought that Windows Phone would finally pick up some pace when Microsoft bought Nokia’s smartphone division. But not much could fill the void of unsatisfactory app selection and a few other shortcomings.

Windows Phone has always had its own fan followings. The OS was also not that bad, with a smooth interface, regular updates, a clean UI and a bunch of features that their users loved. Microsoft even released one OS for all the platforms hoping for a better adoption rate. And the acquisition of Nokia and Lumia division wasn’t much less than a sold try from Microsoft’s point of view. With the OS market share plummeting to less than 0.2% it was all but sure that Microsoft was going to take an action to kill their Windows Phone division. And they did, with a tweet from Joe Belfiore, VP of Microsoft OS confirmed Windows Phone OS’s death.

The tweet mentions clearly that no new features will make it’s way to the WP OS. Also, no new hardware will feature the Windows Phone OS either. He does mention that the platform will still get bug fixes and security updates, which we hope lasts as long as possible.

The biggest reason was clearly the fact that developers never backed up the platform. “We have tried very hard to incent app devs,” explains Belfiore. “Paid money.. wrote apps 4 them.. but volume of users is too low for most companies to invest.” Even Bill Gates ditched Windows Phone for an Android, the Galaxy S8 if you were wondering. That’s also because, with the downfall of windows, Microsoft started to support Android OS a bunch of the Microsoft apps which enabled users to easily switch to the platform. YOu can basically find all of the apps from Microsoft available and well optimized for Android.

With Microsoft heavily invested in Android and iOS, the Windows Phone users won’t have much of a hard time adapting to other platforms. What do think of Windows Phone, did you ever use one, do let us know?