Home Reviews Xiaomi MI 8 Review: A flagship that plays hard to get 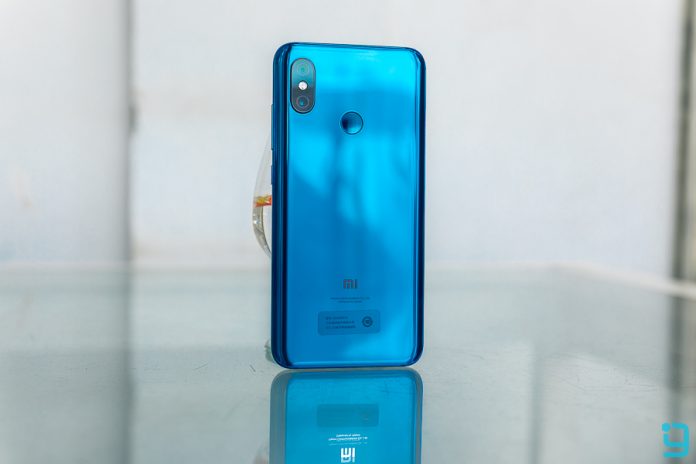 Launched in the occasion of Xiaomi’s 8th anniversary, the Mi-series did away with Mi 7 and named their flagship Mi 8. This flagship landed quite some time some 2 months but unlike many of its phones, it didn’t quite make news headers. Probably because it’s only available in China for some reason. You can buy it online in other parts of the world, though, which is, again, shipped from China. Even so, we got our hands on the Xiaomi Mi 8 and this is our full review of Xiaomi’s latest flagship.

At first look, you’ll immediately know that it resembles the iPhone X uncannily. It is kinda huge, and not really easy to hold. The phone is light and has curvy edges, which helps the grip somewhat, but for someone with small hands, it’s not going to be easy. The back is Gorilla Glass 5, and as it is with glass, they’ll attract finger smudges. But, it looks and feels quite premium on the hands, as expected of a flagship. I personally loved the design! The only thing is, it lacks is Water or Dust resistance but I’m not complaining. The phone is priced accordingly. It’s well built, better compared to last year’s Mi 6, has some sturdiness to it, while being a bit light at the same time.

The Xiaomi Mi 8 decided to go with an AMOLED panel this time from IPS LCD, and this has made a huge difference. I really, really liked the display! The AMOLED panel alone makes it a huge improvement over the Mi 6, but there are also some other improvements.

I am against notches, on screens, but you actually start getting used to these after a time. However, the notch is a bit big, while it only sports one front camera, speakers and an Infra-red sensor. I think Mi could’ve shrunk the notch by a bit, though. The phone’s screen is big at 6.2 inches and the FHD+ display is pretty good as it is! The resolution does the screen justice. Again, you cannot compare it to Samsung’s flagships or even of Huawei’s but at this device’s price point, this is a good display. However, the brightness is not as satisfactory. In the sunlight, it’s just usable – nothing much.

Another good thing about the display is it’s got an always-on feature, which is quite handy. You can easily get the time and notifications on it, and it’s pretty necessary too, as its Facial recognition is quite zippy and will unlock in a fraction of a second, which is a bit troublesome if all you want is to look at the time. But there’s also an option to turn it off to save battery as well.

The Mi 8 sports the Snapdragon 845 processor that lives up to its name. With 6 GB of RAM, I have no complaints about its performance. It’s zippy fast, and can handle all the multi-tasking you throw at it. My games like Asphalt 9 or the Dead Trigger 2 didn’t even stutter once! No, I’m not kidding, and it didn’t heat up either. You can feel the rise in temperature, but it’s a lot less than other phones! And with an Adreno 630 GPU, the gaming experience is just great.

However, there were times when the phone heats up for some weird reason. And I wasn’t even gaming on it then. In fact, no heavy applications, but it was heating for a while, though. Maybe that is a software problem, but I can’t really say.

On the software front, it runs on Android 8.1.0 Oreo, with MIUI 9.5 skin on top. As with all Xiaomi phones, it does have bloatware and proprietary apps. You can remove almost all bloatware, so, that won’t really stand in your way. I have always been a stock Android person, so, I found the UI and navigation only okay. But yeah, if you have been using Xiaomi’s phones and used to MIUI, then, you’ll like it. The phone is available in three storage options: 64 GB, 128 GB and 256 GB. But since there isn’t an expandable memory option, do choose your storage wisely! It has got good speakers…loud and clear, and better than I was actually expecting. Plugging in earphones developed good sound quality too, and the overall audio experience was good. Now, the camera setup is basically the same as that of Xiaomi’s Mi Mix 2S. Nothing new, here. I find the cameras decent. Pictures are sharp and detailed, it maintains color accuracy and usually, photos come out great.

Xiaomi Mi8 Back Camera Samples
1 of 6

The telephoto lens helps in taking good low-light images as well. They sometimes tend to be a bit noisy, but overall, pretty usable. HDR mode, however, does take a second to process. Portrait mode does a good job too, with both faces and objects, as edge detection is pretty decent. The selfie camera has been bumped to a good 20 MP sensor from 8 MP, which is a welcome change. Selfies are detailed with nice skin colors in good lighting conditions. Even with a single lens, it can take pretty great portrait selfies with that background blurring effect we all seem to want so much.

As for video recording, the Mi 8 can record 1080P and 4K videos @ 30 fps, No 6fps here. The 1080P videos are stabilized and have excellent color, but the 4K videos lack stabilization, so do shoot in 1080P for the best outcome.

Also, you can’t take zoomed in videos very well, as it doesn’t switch to the telephoto lens even in the 2X zoom. Another disappointing factor is the poor audio quality while video recording. Still, whatever videos it takes, it does a great job at it, if you can get around its lack of stabilization in 4K.

Now, the MI 8 has a score of 99 on DxO Mark’s ratings, but I really have mixed feelings about this. Of course, I am not the camera expert here, but compared to Samsung Galaxy S9+, which has about the same score, I feel like the Mi 8’s camera falls behind.

With a 3400 mAh battery capacity, the battery capacity is quite good on it. In terms of its display size, it’s not that big of a battery, but in my experience, it is quite good actually. I got above 5 hours of screen-on time during my usage, and is comprised of all kinds of intense gaming, surfing my social media and also watching videos. So, I’d say that is pretty good. The phone boasts that it supports Quick Charge 4.0, but there aren’t any chargers that support that yet. Even Mi 8 itself comes with a Quick Charge 3.0 charger which says it can get your battery from empty to full in about 1 hrs and 40 minutes, and it actually does that. It is still a bit slower than OnePlus 6’s dash charge, so, I would very much like to see it charge with a Quick Charge 4.0.

Overall, after some usage of this phone, I can say that this is a flagship material. Sure, it looks like the iPhone X, it did away with the headphone jack and without Water and Dust resistance, it might not be able to compete with some particular flagships out there. But with its price, it will give them a run for their money! I have no complaints about its build, display, speaker, performance, and battery. They’re all excellent. The camera, however, doesn’t live up to my expectations. Also, the absence of the 3.5 mm headphone jack and lack of an expandable storage is a bit of a letdown.

The Xiaomi Mi 8 starts its international pricing at $490, with a minor difference in price in various online sites, probably because you have to ship them in from China. You can get the best deals from Gearbest right now. If it does make its way here to Nepal, and it the price is around 55000 to 60000, I think it would be a great buy! But that still remains to be seen. What are your thoughts on Xiaomi’s latest flagship? Would you buy it if it were to come here? Or do you think there’s better value for your money? Do let us know.