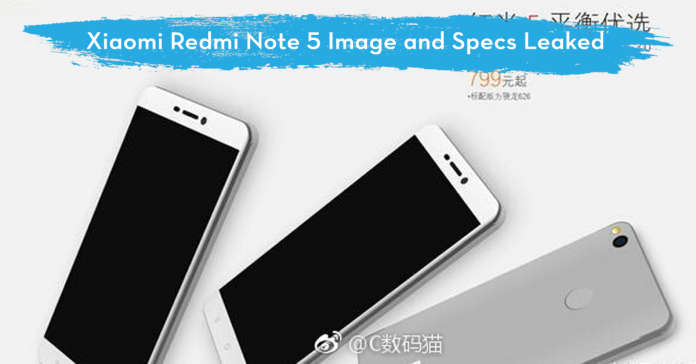 We’re almost at the end of 2nd Quarter of 2017 and there hasn’t been much mid-range phones making the buzz this year. But there’s one phone that we’re looking forward to, the Xiaomi Redmi Note 5. There have been numerous leaks and rumors roundups of the phone and recently, on the Chinese microblogging site Weibo, the official specification banner of the phone has been leaked.

Xiaomi Redmi Note 5 will come with a 5 inch full HD IPS display which is smaller compared to the recent Redmi Note 4 but we also recently saw a leak on the Redmi Note 5A which had a bigger 5.5- inch display. The phone will come in two variants, both with a different configuration. The base model will be powered by Snapdragon 625 octa-core processor coupled with 3GB of RAM and the higher end model will be powered by Snapdragon 630 Chipset along with 4GB of RAM. Storage-wise, the base variant will have the option to opt for either 16 or 32GB of storage and the 4GB model will come with 64GB storage. Both the variants will come with Micro SD expansion support.

On the optics side, the Redmi Note 5 will sport a 16MP Rear Camera and 5MP Front Facing Camera. Seeing the specs at hand the Redmi Note 5A has the edge with its dual camera setup.

The phone will be running on MIUI 9.0 on top of Android 7.1.1 Nougat. It’ll be powered by a decent  3,680mAh battery with Qualcomm Quick Charge.