The invite is out, ZTE will launch a new Axon smartphone with 5G on February 25, and it’s a flagship. Current speculations hint at the ZTE Axon 10 Pro, but it could go either way. GizmoChina suspects the recently leaked ZTE A2020 Pro is the ZTE Axon 10 Pro and the same will go official at the MWC 2019 event.

So, building on the speculation, the upcoming ZTE flagship will feature the Snapdragon 855 SoC along with that SD X50 5G modem. The phone in question appeared on Geekbench three weeks back as “ZTE ZTE A2020 Pro”. The device showed 6GB of RAM, running on Android 9.0, and an 8-core processor. 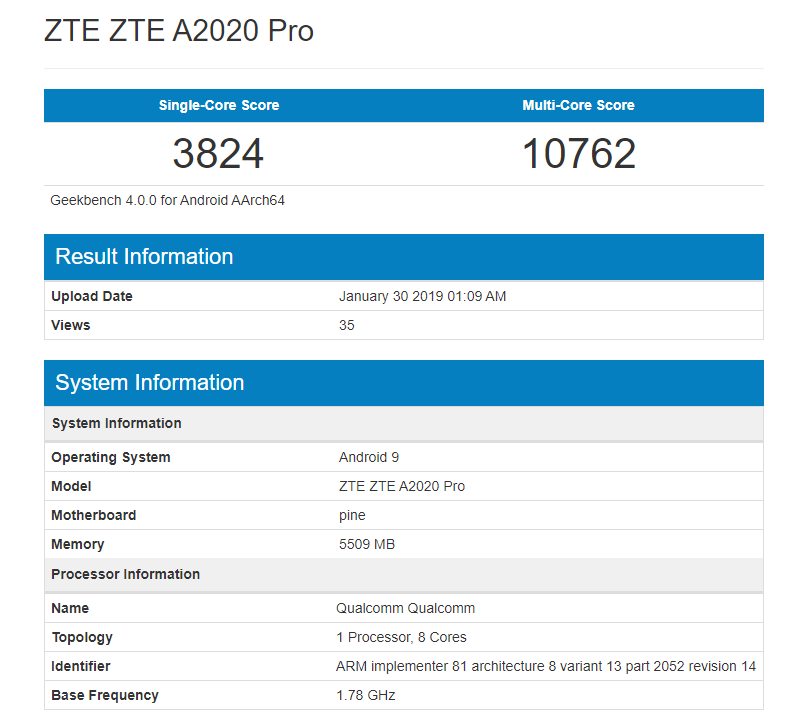 With 3824 points on single core and 10762 on multi-core, the results are awfully close to that of SD855. Further, ZTE has already completed the testing of 5G which includes calls, internet browsing, and WeChat messages. It has passed all the tests and has even received a nod from the Chinese government.

While this is great news coming from a company that was on the verge of bankruptcy. And yet, their problems are far from over, thanks to the on-going trade war between US and China. Following which, President Trump has signed an executive order to ban telephone communication equipment manufactured by ZTE from being deployed to the US wireless network. Politics aside, the soon to release ZTE Axon 10 Pro should come with an AMOLED display, as was the case with its predecessor. Moreover, thanks to the latest gen SoC, the phone should feature improved AI features and ultra-low latency in AR/VR applications. Either way, stay tuned for the full coverage of the event, which we will cover in this year’s MWC 2019.