Intel will be launching its own line of Arc-branded consumer-grade graphics cards next year. However, you can try out Intel’s dedicated GPU now if you want. Intel Iris Xe Max (codenamed “DG1”) has been announced on a handful of laptops this year including the Acer Swift 3X which we have in for review.

There is no doubt that Acer’s Swift 3 series is one of the most popular thin-and-light laptops out there. And the Swift 3X inherits all the key features of this lineup, while also offering a discrete Intel GPU.

The GPU in question is Intel’s Iris Xe Max and spoiler alert, it’s not a powerful one. However, it could be all you need if you are a student or an aspiring digital artist trying to hone your craft. So after having used it for around a month, I’ll be sharing my experience with the Acer Swift 3X in this full review.

Let’s start with the design first. My review unit of the Acer Swift 3X comes in this Safari Gold shade that gives it a premium vibe. You can also go with the Steam Blue variant if you want something more subtle.

This laptop comes with an aluminum body. That being said, it’s not all metal. Acer has cheaped out by using plastic material for the hinge. You can clearly see the two different build materials in action above the keyboard deck.

All the I/O ports are distributed along the two sides of the laptop. On the right, you get a headphone jack, one USB-A, and a Kensington lock slot. Acer has even included two LEDs to indicate power and charging status. Over on the left side, there is a DC-in, one USB-A, one Thunderbolt Type-C, and an HDMI port. The latter is quite rare for Ultrabooks.

In terms of audio, its speakers are placed at the bottom, to the outside of the lower rubber feet. Vocals from these are crisp and clear, but the bass is just not there. Thankfully, you can play with the sound equalizers and orientation from the DTS Audio app that comes pre-installed. I was able to achieve a more likable sound output with a few seconds of tinkering.

Coming to the display, I think it’s one of the major selling points of this laptop. Here, you are getting a matte LCD panel measuring 14″. With a 100% sRGB color gamut, it is not recommended for professional graphics designing workloads, but it’s plenty enough if you are just starting out. I had no problem using this to design and optimize images for our website. 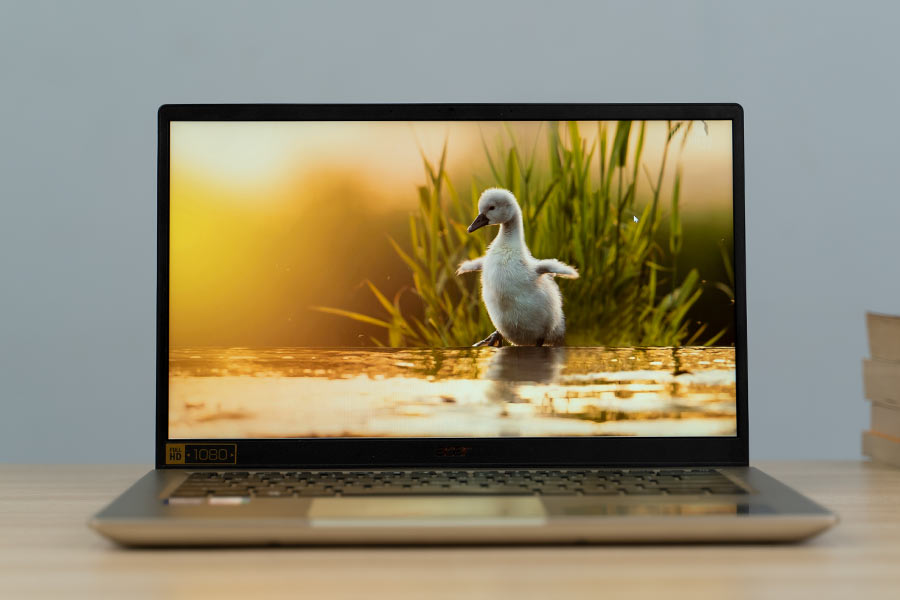 The brightness doesn’t disappoint either. The screen maxed out at 338.3 nits when tested with the SpyderX Pro. This, combined with the matte finish of the panel, makes it usable outdoors as well.

While the side bezels here are quite minimal, the ones on the top and the bottom are comparatively larger. The former houses a 720P webcam, videos from which come out soft and grainy. Thus, you may want to invest in a good external webcam if you need to attend business conferences and meetings more frequently.

The keyboard on the Swift 3X is fairly average and you can notice mild flexing on the right side if you press the keys too hard. The key size and their travel distance are decent enough, but nothing out of ordinary. 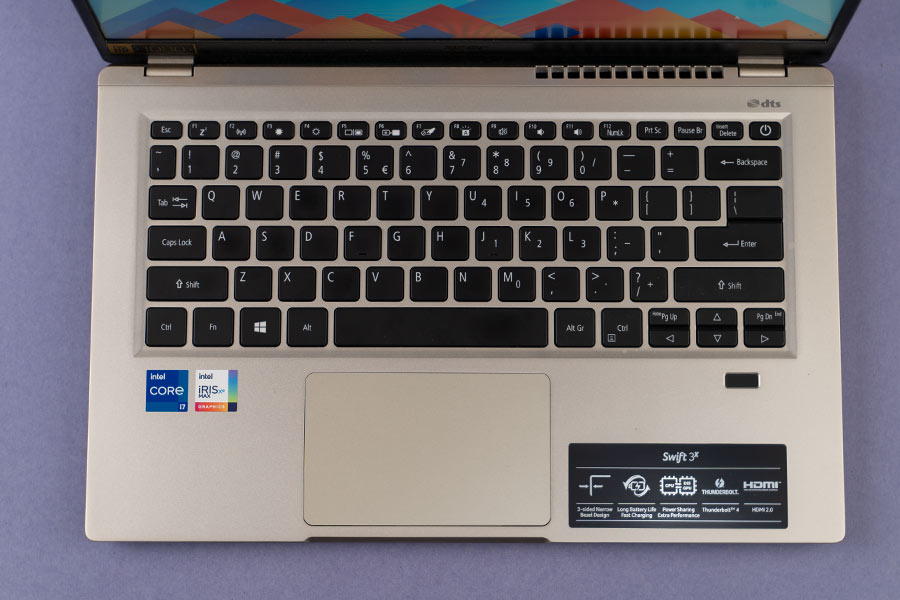 It’s also a backlit keyboard, but you can’t switch between different brightness levels. And I didn’t find the default illumination level to be the brightest either.

Plus, there is no dedicated Numpad because of the space limitation either. Still, you can use the left-hand side of the keyboard as a Numpad by pressing the Numlock key.

The touchpad on this laptop is of a different color than the rest of the keyboard deck which makes it easier to differentiate. Its central placement leaves plenty of room on either side for the user to place their wrists; thus reducing chances of accidental touches. This plastic-made touchpad is pretty responsive and I had no problem whatsoever when using multi-finger gestures.

I also like the fact that the fingerprint scanner is located separately to the side of the touchpad. In many of the budget laptops including the Aspire series, Acer puts it on the touchpad—thereby introducing dead zones on the latter. Talking about its performance, I found this fingerprint reader to be both fast and accurate. Still, I would have been more comfortable with a circular scan area, which feels more natural to me than this rectangular implementation.

Moving on to the performance, my review unit of the Acer Swift 3X comes with the CPU-GPU combo of Intel Core i7-1165G7 and Iris Xe Max, 16GB RAM, and 1TB SSD.

Unfortunately, the RAM is soldered onto the motherboard, but you can easily expand the storage by using the vacant PCIe x4 slot.

That being said, this laptop had no problem handling my day-to-day tasks which mostly includes heavy web browsing, streaming YouTube videos, and light photo editing with Photoshop. 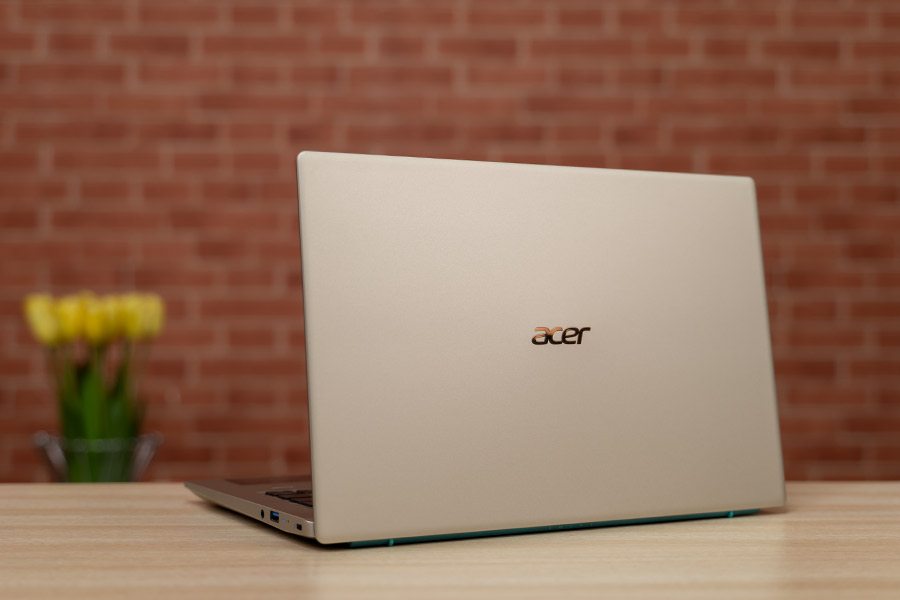 At one time, I had 20 tabs of Chrome open on the background with Photoshop running in the foreground. Yet, I did not notice any lag or sluggishness. While the laptop was cool for the most part, I did notice it to be slightly warm above the keyboard deck near the vents.

Anyway, I would mostly use the laptop in Normal mode, whereas you can even switch to the Silence and Performance modes from the Quick Access app (formerly Acer Quick Access). You can even toggle between these presets using the Fn+F shortcut. But for that, you will have to change the Function key settings from Media to Function from the BIOS.

I also tried a couple of games at 1080p resolution to see how this discrete GPU fares. Playing Valorant at High settings yielded an average of 85fps. That being said, it could go as low as 70fps after a while.

Next up is CS: GO which was simply not playable at High settings. I scaled it down to Medium and the performance was much better, where I got 55fps on average. Even though I noticed some screen tearing here and there, GTA V was playable at Normal settings. On average, the Swift 3X managed upwards of 55fps here.

I even tried running Cyberpunk 2077 on it. It’s not hard to guess that this laptop is not made to handle such a taxing game. That being said, I was able to get around 20fps on the lowest of settings—when lowering the resolution to HD.

How is its cooling solution?

As for cooling, Acer has provided a single fan with dual-heat pipes here. The vents open up near the right side of the display. The hinge also provides some ventilation by lifting up the bottom deck of the laptop. Thankfully, the fan remains silent most of the time, even when switching to the Performance mode. 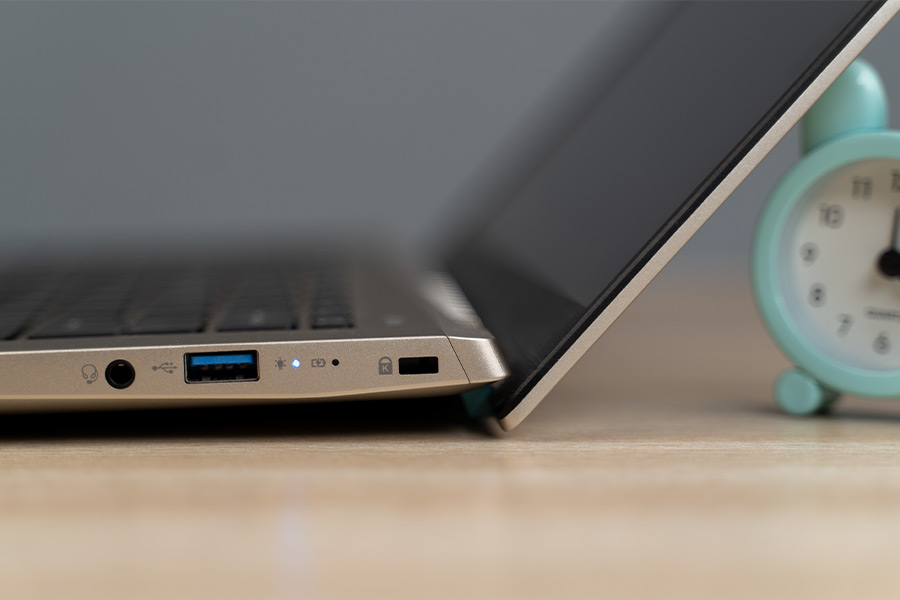 However, you’ll certainly hear it under demanding workloads including gaming. On top of this, can also notice the laptop getting warmer here. For instance, after 20 minutes of gameplay, I recorded temperatures of about 49ºC near the vents whereas the WASD keys were relatively cooler at 46ºC.

As evident from above, the Iris Xe Max is only slightly superior to the integrated Irix Xe G7 GPU. The major difference between the two is the Deep Link Technology available on the former. It is software that dynamically adjusts power between the CPU and GPU based on the current workload.

Intel says it comes in handy in AI and content creation workload. Even so, there are only a handful of apps that actually support it—which includes Blender, Cyberlink, Open Broadcaster Software, etc. Fair to say, this makes the Iris Xe Max beneficial for a very niche group of users.

Moving on, the Swift 3X comes with Windows 10 alongside plenty of apps pre-installed including Norton Security, Agoda, and Evergreen—all of which are apps that I don’t need. That being said, I got the Windows 11 update quickly enough. While I’m slowly adjusting to the new OS, the process has not been all-joy to me.

After the update, most of my games didn’t launch at all or would crash midway. A part of the issue was the graphics card’s driver, which was solved after I installed the latest stable Iris Xe Max driver. Still, I could not get Valorant running as it continued to show problems with TPM and Secure Boot, although we had them both enabled.

Fueling this laptop is a 58.7Wh Lithium-ion battery. Acer rates it for up to 14 hours but I could only get close to half (~6 hours 45 minutes) of the claimed battery life. In terms of charging, the included 65W barrel-shaped charger gets the laptop from 10 to 100% in 1 hour 40 minutes. You can even juice it up using a Power Delivery (PD) Type-C charger. Furthermore, the USB Type-A port on the right supports power-off charging that you can use to charge your phone and other accessories even when the laptop is turned off. This feature is accessible via the aforementioned Quick Access app.

So, should you buy the Acer Swift 3X when you can get budget gaming laptops with more beefed-up GPU for its asking price? Not quite. The thing this laptop excels at is its portable form factor and display quality, while also being rich in terms of ports.

Thus, it is a decent choice for students, or someone learning photo and video creation. But for everyone else, the Iris Xe Max doesn’t add much value. It’s not a gaming beast either and not many apps support its signature feature so far either.