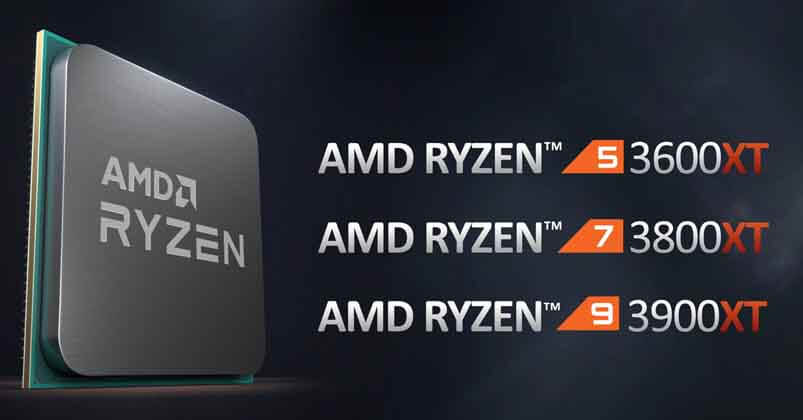 While the tech enthusiasts are eagerly waiting for AMD’s upcoming fourth generation of Ryzen desktop processors, AMD has announced three new XT CPUs under the current third-generation lineup. The new XT processors rely on the same underlying architecture as their X-counterparts but enjoy a boosted clock speed. Read along to learn more about the new AMD Ryzen 3000 XT desktop processors, including their specs, features, price, and availability.

The AMD Ryzen XT Processors aren’t an entirely new set of CPUs that the company has designed from the ground up. Instead, AMD has tweaked the existing X processors to allow them to reach higher boosted clock frequency. The newly announced desktop processors include Ryzen 5 3600XT, Ryzen 7 3800XT, and Ryzen 9 3900XT.

Here, Ryzen XT processors are all based on AMD’s Zen 2 architecture. These are the “Matisse Refresh” models of existing Ryzen 5 3600X, Ryzen 7 3800X, and Ryzen 9 3900X. The XT models have the same core/thread counts, cache size, and base frequency as their X counterparts. However, AMD has increased the boosted frequency on the XT processors. The biggest boost is in the Ryzen 3800XT which can now reach up to 4.7GHz compared to 4.5GHz that the Ryzen 3800X could achieve. That’s an additional 200MHz boost in the single-core performance. Similarly, Ryzen 3900XT and 3600XT can reach 4.7GHz, and 4.5GHz respectively. It calculates to 100MHz boost in each of them.

Motive Behind the refresh

It’s still unclear how AMD has managed to achieve higher clock speeds without making any significant change to the architecture. Even the TDP remains unchanged. We may not know how they did it but their intention is crystal clear – AMD wants to close the gap between the Ryzen processor and their Intel counterparts.

All of the Ryzen X processors mentioned above come with default cooler but this isn’t the case with the XT processors. While the Ryzen 5 3600XT will still come bundled with Wraith Spire cooler, there won’t be any stock cooler accompanying the other two. AMD has recommended user to use a minimum 2800mm radiator. The list of recommended coolers can be found at AMD’s official site.

B550 motherboards and A520 Chipset

Along with the new processors, AMD has also announced the new A520 chipset for socket AM4. It’s a successor to existing entry-level A320 chipsets. The latest chipset will support Ryzen 3000 processors and beyond. Similarly, AMD has launched the B550 motherboards as well.

AMD has also announced the upgrade to the AMD StoreMI dubbed AMD StoreMI 2.0. To those unaware of the feature, it is a tool by AMD that utilizes resources effectively to improve load times, boot times, and system responsiveness. The new version comes with a new cache-based acceleration algorithm that is said to speed up boot time by up to 31% and game load times by up to 13%.