Asus has finally unveiled its latest lineup of flagship gaming smartphones. The ROG Phone 5 features the latest Snapdragon 888 chipset, 144Hz Samsung AMOLED panel, and it has also brought back the 3.5mm headphone jack. Keep reading to learn more about the recently launched Asus ROG Phone 5 along with its specs, features, expected price, and availability in Nepal.

This year the Rog Phone 5 lineup features three devices – the vanilla model, the Pro model, and the Ultimate model. The vanilla model looks a lot like its predecessor with the Republic of Gamers logo on the back. The higher-end variants on the other hand feature the new ROG Vision display at the back. The ROG Vision is the first rear matrix display ever on a smartphone. It is capable of displaying different animations for charging, incoming calls, and X Mode. Similarly, users can even create different custom animations according to their style. Coming to the front, the Asus Rog Phone 5 features a 6.78-inch FHD+ AMOLED panel from Samsung. It comes with a 144Hz refresh rate and 300Hz touch sampling rate. Asus is also claiming touch input latency to be just 24.3ms. The display also has DC dimming and is protected by Corning Gorilla Glass Victus. On top of everything, Asus is promising to roll out an OTA upgrade with an always-on HDR feature that will upscale SDR contents to HDR for the ultimate HDR experience. 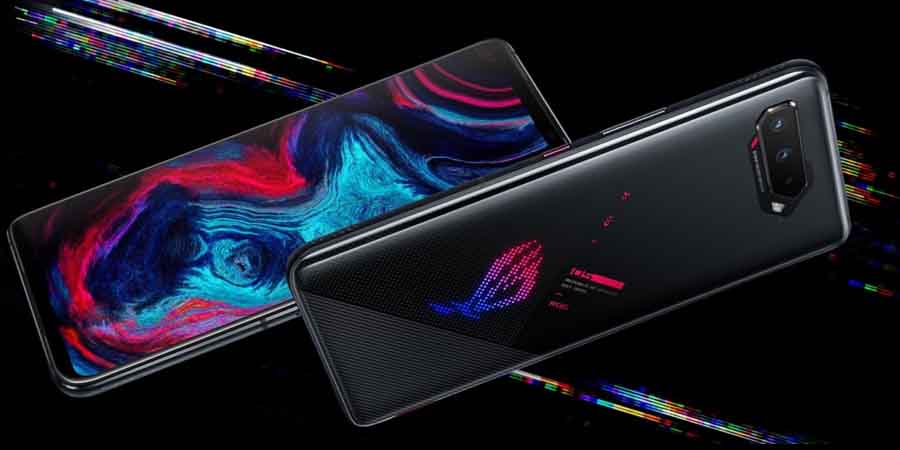 Asus is also shipping the Pro and the Ultimate variant of the Rog Phone 5 with AeroActive Cooler 5. It’s a clip-on external cooling fan that the company claims can reduce the device’s core temperature by up to 15°C. What makes it even more efficient is the fact that Asus has played with the design of the phone to put the motherboard as middle as possible. This way, it is much closer to the cooler. 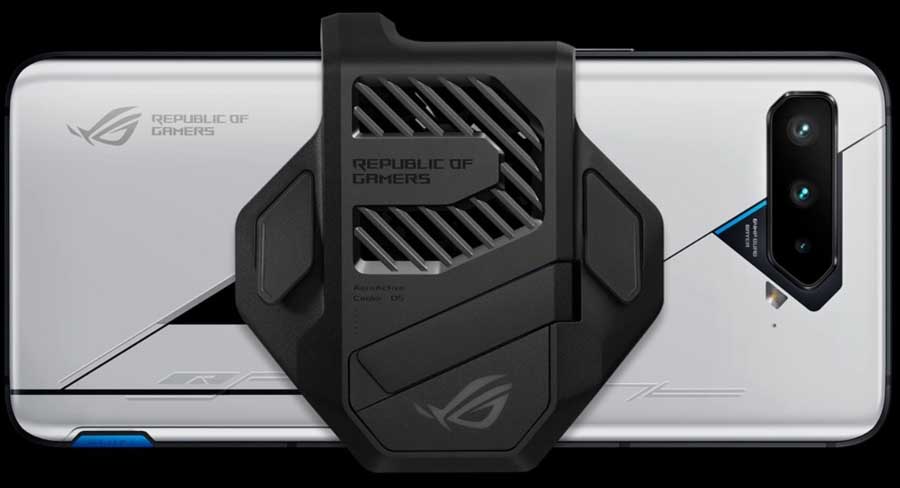 In addition to the cooling, the AeroActive Cooler 5 has two shoulder buttons, a 3.5mm headphone jack, and a built-in kickstand. Even without the cooler, the Rog Phone 5 has two ultrasonic buttons in the form of AirTrigger 5. You can even buy ROG Kunai 3 Gamepad and accessories for a better gaming experience.

Nothing much has changed in the camera department. The Asus ROG Phone 5 features the same 64MP primary camera with the Sony IMX686 image sensor. It can output a 16MP pixel-binned image with pixels as large as 1.6 microns. Accompanying it are a 13MP ultrawide shooter and a 5MP macro lens. The rear camera setup is capable of recording 8K 30fps videos, 4K 60 fps videos, and 120 fps slow-motion videos. On the front, there is a 24MP selfie camera.

Fueling the phone is the 6000mAh battery with support Quick Charge 5.0 and PD Charging. In order to attain high charging speed, Asus has divided the battery into two cells of 3000mAh battery each. The two cells are separated with the motherboard placed between them. In a time where chargers are slowly disappearing from the phone’s packaging, Asus has included a 65W HyerCharge adapter in the box.

As you would expect the phone has two Type-C ports – one on the bottom and one on the side. The latter allows the user to continue playing games even with the charger hooked in. It can also be used to connect the AeroActive Cooler 5.

Connectivity is another important aspect for gamers and the Asus Rog Phone 5 doesn’t disappoint here as well. It comes with Wi-Fi 6E and Bluetooth 5.2. The latter also has support for Qualcomm aptX Adaptive. Similarly, other connectivity features include a dual sim slot, 54/4G connectivity, Wi-Fi Direct, and NFC.

The price of the Asus ROG Phone 5 starts at 800 Euros for the 8/128GB variant. The Pro and the Ultimate models are priced at 1,200 and 1,300 Euros, respectively.  Though the phone is confirmed to launch in India, it’s unlikely that Asus ROG Phone 5 will launch officially in Nepal. Still, you might get your hands on it via unauthorized channels. As such, we expect the price of Asus ROG Phone 5 in Nepal to be around NPR 1,15,000.