Home gaming Black Shark 3 Review: Get Your Game On! Love it or not, dedicated gaming smartphones have become a thing in the past couple of years. Youth these days love gaming on their phone. However, if you go out in the Nepalese market, you will find that finding a gaming smartphone is much more challenging than finding a gaming laptop. Though you can game on pretty much any high-end smartphone, ones that are specifically designed for gaming purposes are hard to come by. But today, we have the new Black Shark 3 in for review.

Ola Electronics has made the phone available in Nepal, and users can also opt to buy the GamePad 3 for Rs. 9,490 more. It comes with a controller, an attachment, and a phone holder. It is a Bluetooth-enabled controller that can be attached to the side of the Black Shark 3 using the phone holder. However, it also supports a hands-free operation. 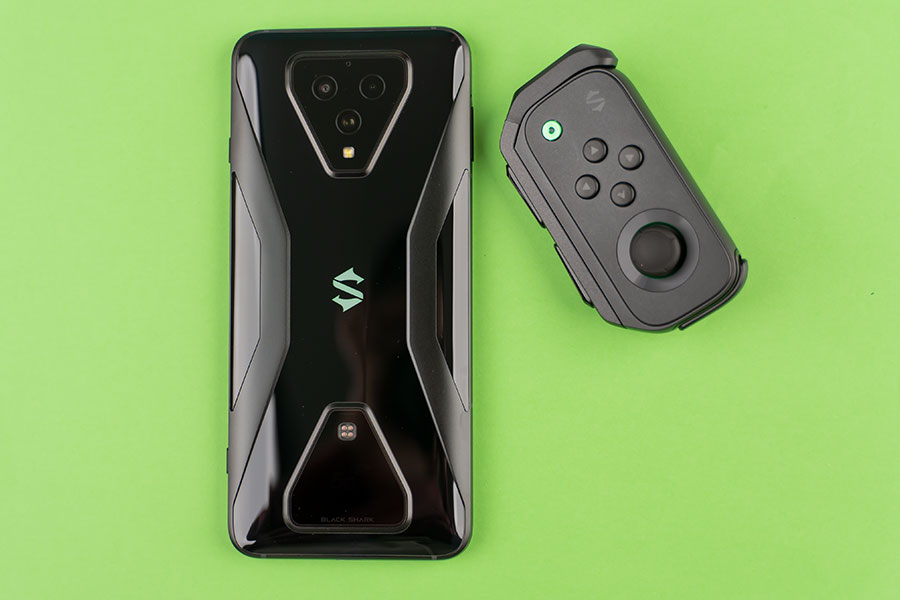 The attachment can be added on top of the controller for extra buttons. The buttons on the GamePad 3 can be remapped. It has a motion-sensing feature and users can even change the direction of the controller. In this review, we are going to test the gaming capability of the Black Shark 3 to see if it is worth buying.

Before getting to the gaming performance of the phone, allow me to discuss its design and display. Black Shark 3 sports a 6.67-inches display with an FHD+ resolution of 1080 x 2400 pixels. The colors and contrast are what you could expect from an AMOLED panel. That being said, it still can’t match the quality of the ones on OnePlus 8T and Samsung Galaxy S20+, which are its closest competitors (in terms of price). The colors are slightly on the warmer side, but it is not much of an issue as you can easily customize the color scheme under the settings. Even with the advertised brightness level of 500 nits, visibility will be an issue when using the phone outdoors—especially when you’re directly under sunlight. Black Shark 3’s display has a 90Hz refresh rate and a touch sampling rate of 270Hz. In case you didn’t know, a touch sampling rate (measured in Hz) refers to the number of times the display scans for an input. A higher sampling rate means your touch input gets registered much quicker and without any lag.

Other notable features of the display include Anti-flicker mode, HDR mode, and the Super Cinema Mode. The latter optimizes standard video content to look smooth at a higher refresh rate. One can also notice the thick bezels around the screen. From a gaming perspective, it is a nice thing to have as it reduces accidental touches, while the company has made it even better by slapping in a stereo speaker setup. Likewise, its in-display fingerprint sensor is both fast and accurate as well.

Even the design of the phone gives a gaming vibe. The back of the phone is made up of Aluminum and glass. The frames on the other hand are built entirely out of aluminum. The phone feels sturdy and offers a better grip on the hand. Despite the size of the phone, handling the phone is easy and it doesn’t get uncomfortable. 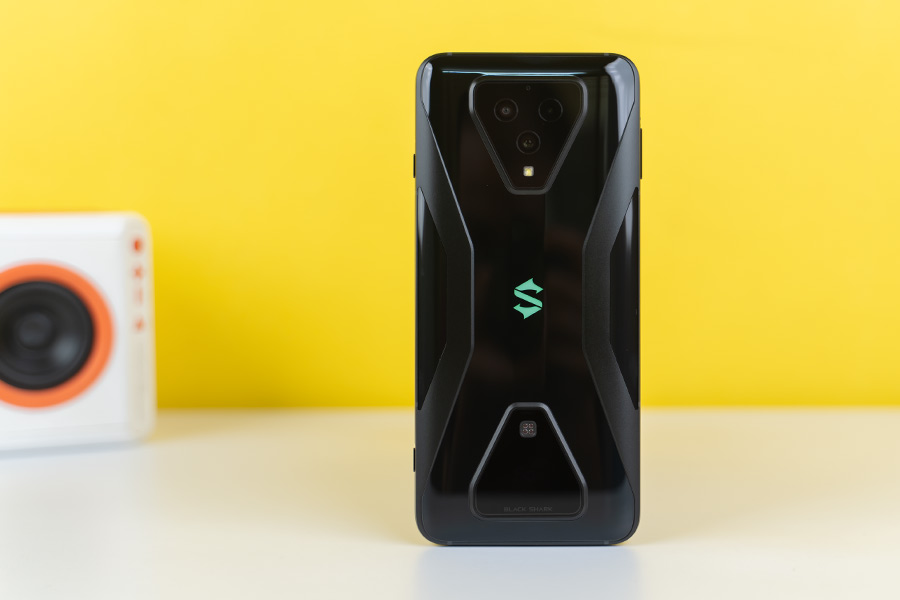 The Black Shark logo on the back glows. It is placed in between two LED lights which you can customize for different notifications according to your preference. Similarly, there are two triangular cut-outs on the back of the device. The one on the top houses the camera module whereas the other has pins to connect the magnetic charger.

As you’d expect from a gaming phone, the Black SharkFPS 3 boasts a top-of-the-line spec-sheet. It is powered by Snapdragon 865 and comes with up to 12GB of DDR5 RAM paired with 256GB of UFS 3.0 internal storage. Talking about the games, 90Hz optimized titles such as PUBG Mobile, Mortal Kombat, and VainGlory ran without any lags and shutters. One can also play PUBG in 90fps (in Smooth graphics). 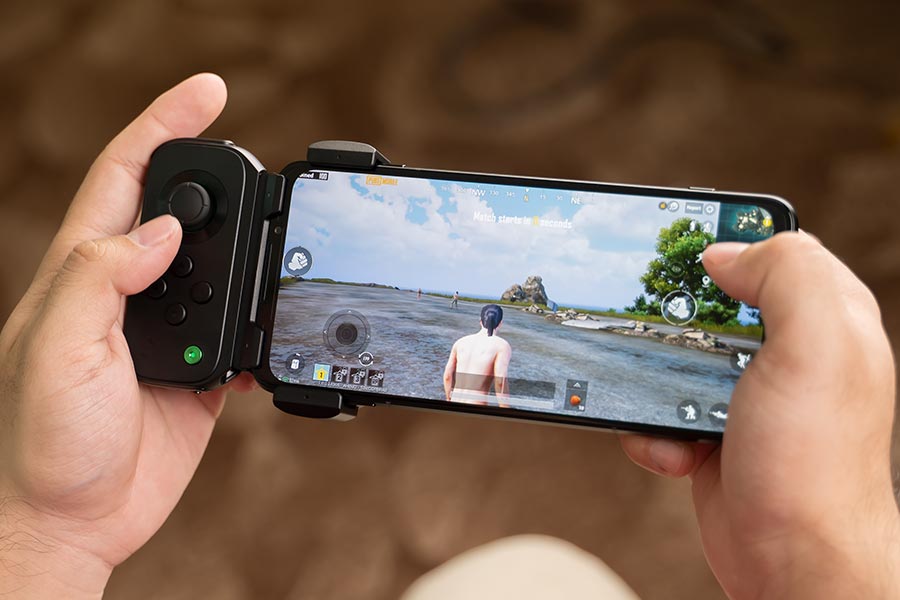 The highest setting achievable here is Ultra HD graphics and Ultra Frame rate where you can get a stable 35 to 40fps. Unfortunately, Fortnite is not optimized for 90fps gameplay yet, and the setting doesn’t allow users to go beyond 30fps.

Another impressive thing about the device is the Shark Space which can be activated by sliding the toggle. Here, you can add games and customize aspects like performance level and display quality individually. For example, there is a Ludicrous Mode that increases CPU usage for a smoother experience. On the downside, the phone heats pretty fast, while accelerating the battery drain under this setting. Features like screen-recording, FPS monitoring can be accessed from the Gamer’s Studio. While the device doesn’t have physical shoulder buttons like the Black Shark 3 Pro, it comes with pressure-sensors in the display that you assign functions as per your convenience.

For any gaming machine, the cooling solution is as important as the CPU that it cools. Thankfully, Black Shark 3 doesn’t disappoint here. You won’t face any heat management issues even during prolonged gaming sessions. This has been possible due to the device Sandwich style liquid cooling technology. In this case, the motherboard is sandwiched between two liquid coolers with Graphite on top.

The device ships with Joy UI 11 on top of Android 10. The UI comes with a green accent that gives it an inherent gaming vibe. There have been talks about this phone getting the Android 11 update. If you’ve used a Xiaomi, Poco phone before, the JoyUI should feel right at home since it is based on MIUI.

However, the company needs to work on providing timely updates as well, since our review unit of the Black Shark 3 is still stuck on June’s security patch. Additionally, I also witnessed a couple of instances of ad on certain pre-installed apps like Cleaner.

Let’s talk about the cameras now. The triple camera setup on the back consists of a 64MP primary camera, a 13MP ultra-wide lens, and a 5MP depth sensor. On the front, there is a 20MP selfie camera. Gaming phones are not known for having great camera capability. Unfortunately, the Black Shark 3 bows down to this trend as well, since its cameras are comparable to that of an upper mid-range phone. So don’t expect S20 or OnePlus 8T-level camera on this phone.

As evident in this picture, the Black Shark 3 saturates and sharpens images to an extent. However, the end result isn’t that bad.

The portraits are above average.

Its edge detection is not perfect but is just acceptable.

The selfie camera over-processes the face portion but the photos remain sharp. Similarly, the colors on the selfies are also decent.

In terms of videos, Black Shark 3 can record 4K footages at up to 60fps. However, the image stabilization works only while recording 1080P videos at 30fps. Thus, if you are not equipped with a gimbal, it is better to stick to 1080p recording. Moving on, the selfie camera can record 1080P videos at 30fps and it doesn’t support any stabilization. In addition, you can also record SlowMo videos at 720P using the rear camera.

The battery is another important aspect of a gaming phone. Black Shark 3 is equipped with a decent battery of 4720mAh capacity. I don’t have any complaints about the actual endurance on this phone. With the 90Hz refresh rate turned on, I was able to get around 6 hours of screen on time on normal usage.

Even during intense gaming sessions, the phone lasted as much as 4 hours. In case you run out of juice, you can use the 65W charger to quickly charge the device. The in-box 65W fast charger can charge the device from 0 to 100% in around 40 minutes. 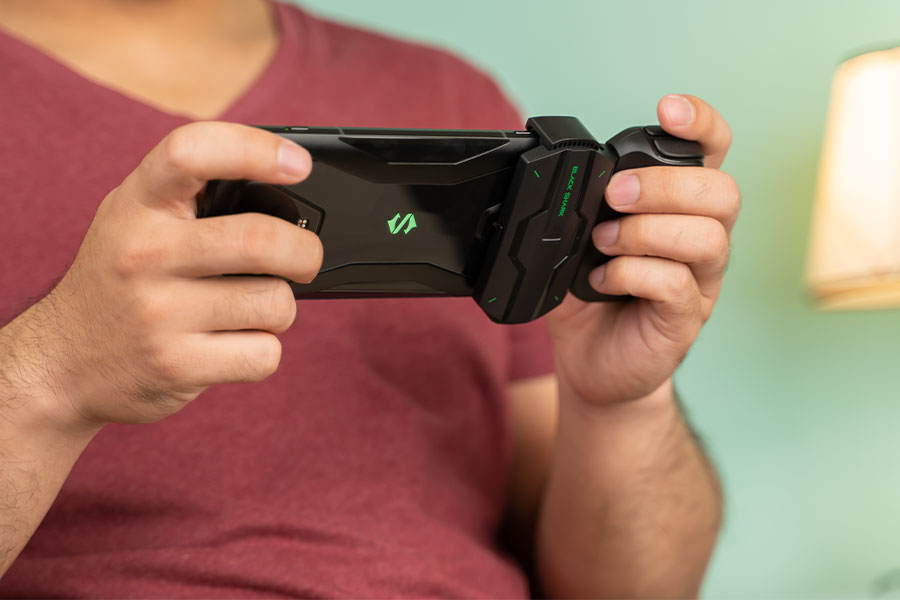 Moving on to the speakers, the position of the dual-front facing speakers saves it from getting blocked while playing games. There is also a 3.5mm headphone jack on the top of the device which other brands are getting rid-off in their premium offerings.

The launch of Black Shark 3 in Nepal is a warm welcome from us as there aren’t that many options for gaming smartphones in the country. And we hope to see more such smartphones launch here. Keeping that aside, is the Black Shark 3 worth buying? Well, if you are serious about mobile gaming it will serve you well. It offers high-fps stable gameplay and doesn’t heat even after intense gaming. Even for normal users, it is not a bad option.

But, conventional premium phones like the OnePlus 8T and Samsung S20+ provide better cameras and software experience. However, they don’t come with gaming-centric features and accessories like the Black Shark 3. To sum it up, we really like the fact that Black Shark 3 is available in Nepal and hope that it is followed by other gaming phones from Asus and Lenovo Legion. This would most certainly boost the current scenario of mobile gaming in Nepal.