We’ve welcomed a new year and you know what that means, right? Smartphone manufacturers are gearing up to flood the market with their latest devices, making use of all the innovations actualized throughout the year. New and improved chipset, better cameras, new software, what have you. And when it comes to chipsets, Qualcomm has been absolutely crushing it in mid-range and premium smartphones, while MediaTek reigns supreme on budget and even a couple of mid-range devices.

A faster performance has always been the principal focal point for a quality-chipset. But as the world marches towards a new generation of cellular connectivity, there’s a new sheriff in town – 5G. With its unprecedented bandwidth and speed, device makers have been working to the bone to incorporate the technology into their products. Though there are already quite many 5G-capable phones on the market, most of them apply the chipset-plus-5G modem technique to give the device the 5G crown.

On top of being cost-ineffective, this method isn’t energy efficient as well. Therefore, the demand for a chipset with integrated 5G support has been realized for some time now, with some manufacturers meeting them this early on.

Take Samsung’s Exynos 980 or Huawei’s Kirin 990 5G. Both SoCs come with an integrated 5G modem, but these are not what I’ll be talking about today. On the contrary, and more interestingly even, I’ll be discussing the ones from MediaTek and Qualcomm. The recently announced MediaTek Dimensity 1000 series and Qualcomm Snapdragon 765G look to bring 5G to the masses while being capable of incredible performance as well.

More specifically, I’ll be pitting the 765G against the Dimensity 1000L, which is slightly underclocked than the regular Dimensity 1000 but otherwise share a similar spec-sheet. However, as MediaTek hasn’t officially revealed a whole lot about the 1000L, we’ll be at times, assuming it with the regular Dimensity 1000. These chipsets from MediaTek and Qualcomm are set to feature in smartphones like OPPO’s forthcoming Reno3 and Reno3 Pro respectively.

Wow, that was a long intro! Let’s finally get into it.

Since these are 5G-ready chipsets, it only makes sense that we discuss of their 5G prowess first. The Snapdragon 765G includes the Qualcomm Snapdragon X52 Modem-RF System and supports both mmWave and sub-6GHz spectrum of 5G on SA (Standalone) & NSA (Non-Standalone) modes. Likewise, the Dimensity 1000L makes use of the MediaTek Helio M70 5G modem and only supports the sub-6GHz spectrum of 5G on SA and NSA modes.

Ah… that may have been way too much tech jargon so allow me to very briefly break them down. Measured in megahertz (MHz) or gigahertz (GHz), a frequency spectrum is the range of electromagnetic radio frequencies used to transmit data packets through the air. While it capped out to 2.5GHz in 4G LTE, 5G, on the other hand, is in an entirely different playing field. Theoretically, it can go as high as 300GHz! Now as I said before, there are two spectrums of 5G: mmWave (millimeter) and sub-6GHz. 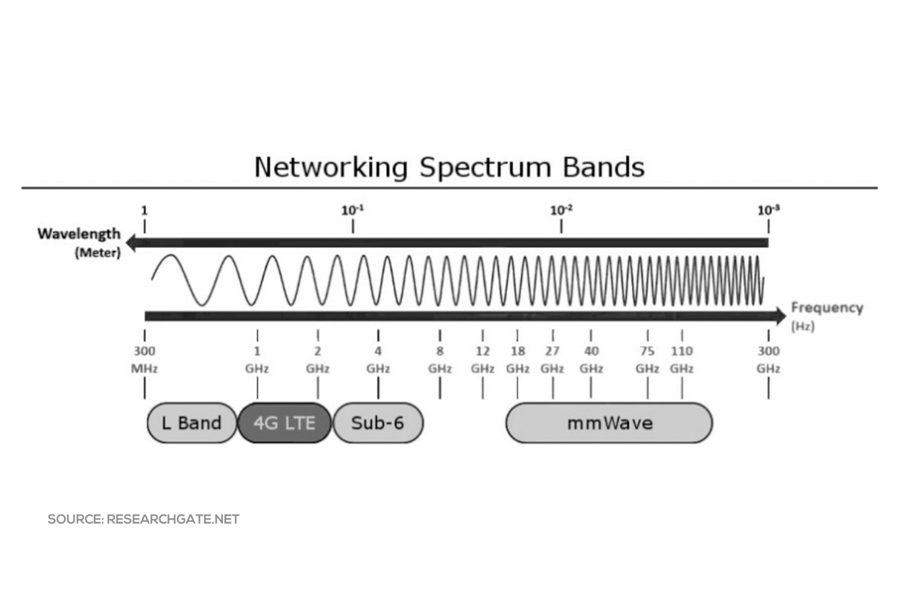 Without going into any intricate details, the difference between these two can be put this way – compared to sub-6GHz, mmWave is faster (way faster), has higher bandwidth, but also suffers from a narrower coverage range and an extremely high cost of installation and maintenance. So… which one’s better?

With that out of the way, you may now have made some assumptions of the 5G capabilities of these two chipsets. The Snapdragon 765G is the future-proof of the two with its support for both mmWave and sub-6GHz 5G spectrum, yes. But the battle isn’t done and dusted yet. While the mmWave 5G is significant especially in countries like the US, it is crucial to note that at this stage, only a handful of network providers offer this spectrum of 5G.

For instance, as of now, AT&T’s mmWave 5G is available only in a couple of US cities, whereas its low-band 5G can be found in a handful of cities in the country. Though the regular Dimensity 1000 only supports sub-6GHz 5G, MediaTek promises up to an impressive 4.7Gbps and 2.5Gbps peak download and upload speeds respectively. Considering this, the 1000L may offer similar or more likely slightly slower speeds, just to differentiate the two. On Qualcomm’s end, the Snapdragon 765G maxes out on 3.7Gbps and 1.6Gbps. Dimensity 1000L is not looking too shabby, now, is it?

Here, the low peak speeds on the 765G, despite supporting both 5G spectrums might be a strategy of Qualcomm to differentiate it with its flagship Snapdragon 865. It boasts a monstrous peak download and upload speeds of 7.5Gbps and 3Gbps respectively. 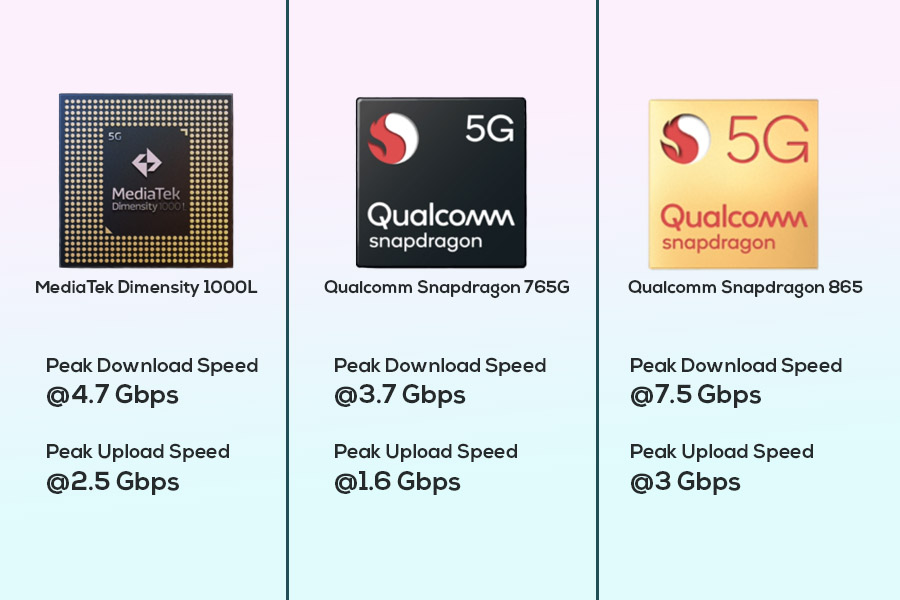 Additionally, despite both chipsets supporting dual 5G SIM and the latest WiFi 6 (ax) standard, MediaTek will take the crown for being the first to do so. More on connectivity, the Snapdragon 765G comes with Bluetooth 5.0 and Qualcomm’s aptX Adaptive codec. Here as well, MediaTek trumps over Qualcomm as the Dimensity 1000L equips the latest Bluetooth 5.1 standard but expectedly is void of Qualcomm’s superior audio codecs.

Now let’s talk performance. These are octa-core chipsets with 64-bit CPU architecture and manufactured under the 7nm lithography process. However, they differ in how the CPU cores are arranged. MediaTek has gone with the traditional big.LITTLE (bL) architecture with four high-end ARM Cortex-A77 cores clocked at 2.2GHz and four efficiency Cortex-A55 cores at 2.0GHz on the Dimensity 1000L.

Here, though the heavy/medium/light core arrangement on the 765G is impressive, the Dimensity 1000L may prove victorious over the competitor by a hair, as it boasts a higher number of the latest Cortex-A77 performance core count than the heavy or medium cores in the Snapdragon 765G.

Moving on to graphics, the Dimensity 1000L has the ARM Mali-G77 MC7 GPU while the Snapdragon 765G comes with Qualcomm’s own Adreno 620. Now, ARM’s Mali series of GPUs have always trailed behind the Adreno in the past, but the G77 based on the new “Valhall” architecture vows up to 30% increment in performance density and energy efficiency and a 60% boost in machine learning applications than the previous generation. 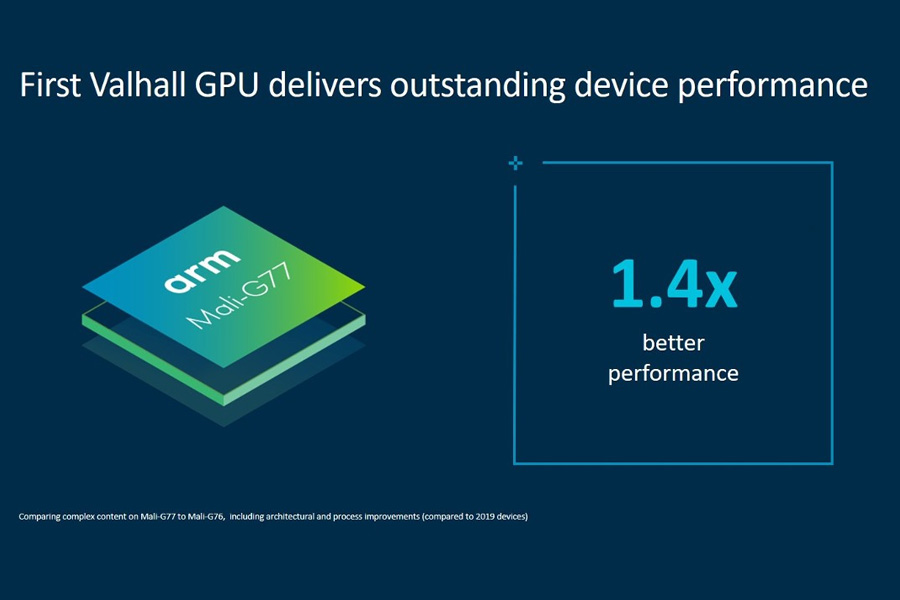 On the other hand, the Adreno 620 is an upper mid-range GPU from Qualcomm, which is further tweaked to offer better graphics performance on the 765G, as this chipset is targeted towards gaming.

This pre-binned GPU is at the top end of its scale and can handle higher GPU & CPU clocks; more precisely the Adreno 620 on the 765G provides further 10% graphics performance boost than the one on the regular 765, while also equipping the additional Snapdragon Elite Gaming Features. 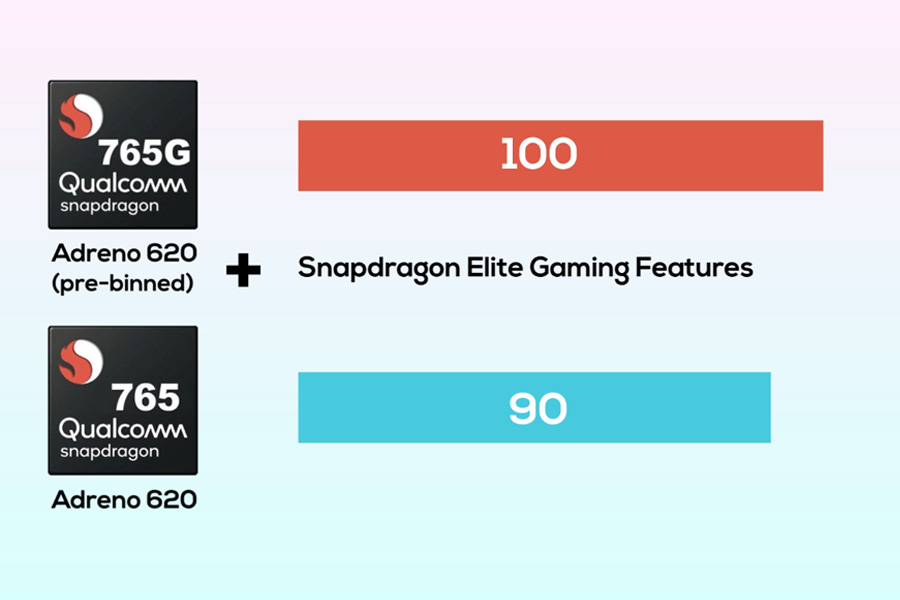 What’s more, these two chipsets are similar to their memory too, since they come with LPDDR4x memory type. The Snapdragon 765G boasts memory speeds up to 2133 MHz with support of up to 12GB RAM. We don’t quite know about the precise memory speed of the Dimensity 1000L, but if the regular Dimensity 1000 is any indication, the former could pack a speed of a little slower than 1866MHz and maybe up to 16GB of RAM or less.

Also, MediaTek says its Dimensity chipsets will have UFS storage but doesn’t specify the generation. This could probably mean that it is UFS 2.1 and not the superior 3.0 like in the Snapdragon 765G.

On to the displays, the Snapdragon 765G supports QHD+ displays at 60fps and 120Hz refresh rates at FHD+ displays. 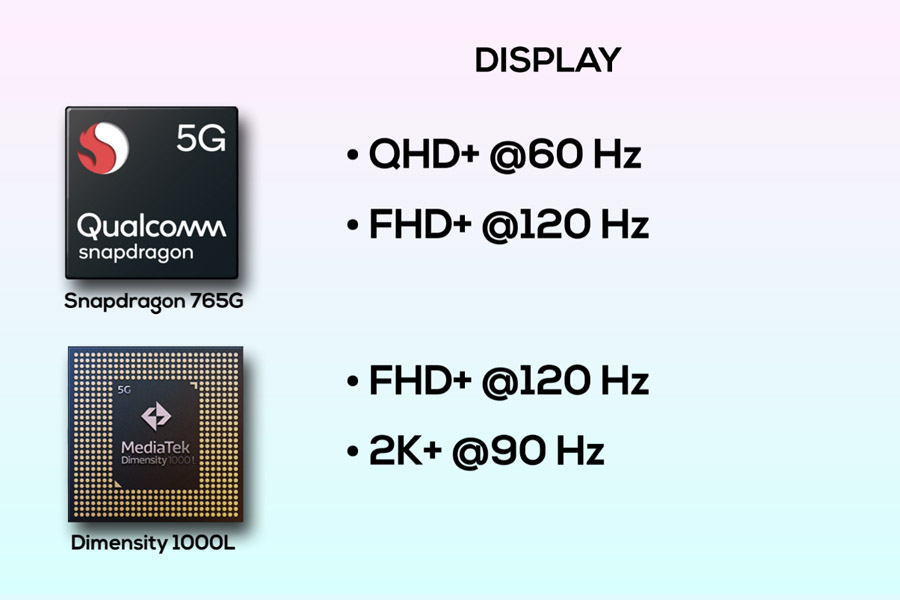 Getting to cameras, the 765G uses the Qualcomm Spectra 355 ISP and supports up to 192MP single camera and up to 22MP dual camera. The Dimensity 1000L may support up to 80MP cameras with up to 32 + 16 dual cameras like its more powerful brother with its 5-core ISP. Both these chipsets can shoot 4K HDR videos with H.264 (AVC), H.265 (HEVC) and VP9 encoding and playback, while the Dimensity also supports AV1 format (successor to VP9) for better video streaming and is the first to equip that as well.

AI performance is another thing to look after in these chipsets. We can expect the hexa-core APU 3.0 of the Dimensity 1000 to make its mark on the 1000L as well. Though this new-gen AI processing unit delivers an impressive 4.5 trillion operations per second (TOPS), the 5th gen Qualcomm AI engine on the Snapdragon 765G is sufficiently better with 5.5 TOPS AI performance. 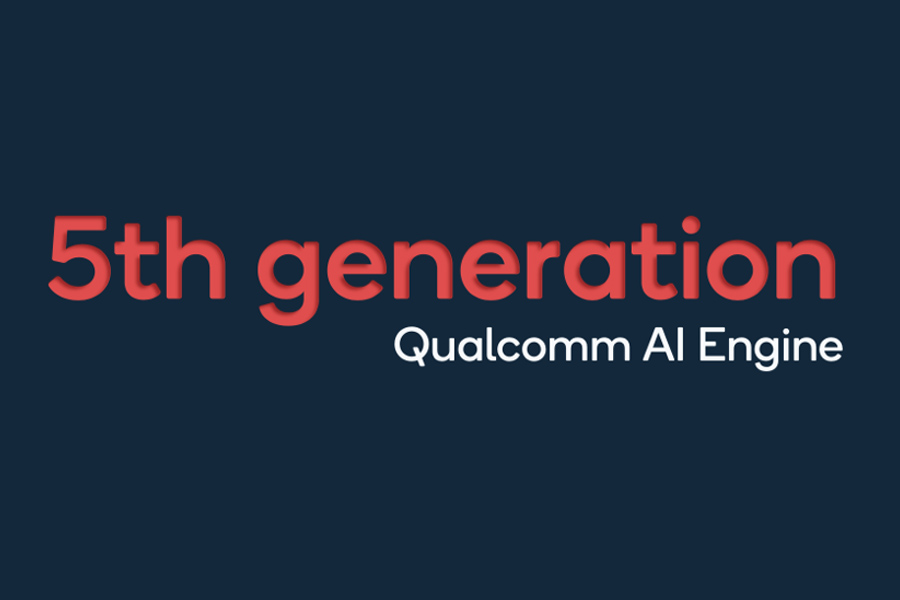 So… yeah! This is where we stand vis-à-vis upper mid-range mobile chipsets. MediaTek is no longer an underdog in the market and is gunning for the top spot in the premium smartphone market as well, which Qualcomm has been hogging for all these years. This exponential growth of the company could have been partly supplemented by its recent partnership with Intel. If the benchmark reports of the OPPO Reno3 (with Dimensity 1000L) and Reno 3 Pro (with Snapdragon 765G) that have surfaced online are to be absolutely trusted, the Dimensity 1000L successfully outperforms the 765G. Now, only if MediaTek released the source code of its chipsets for free like Qualcomm, the company would see a larger share of developer support in the Android community as well.