When Escobar Inc. announced the Escobar Fold 1, Roberto Escobar bashed Apple for deceiving people with their overpriced products. He shared his plan to beat the top smartphone brands by introducing phones that would otherwise cost thousands of dollars at a fraction of the price. They did release Escobar Fold 1 under $350 which was quite commendable. And now they have released Escobar Fold 2, which tries to replicate the Samsung Galaxy Fold but comes at a fraction of the price. With the launch, Escobar Inc. has, in a way, declared, a war against the South Korean tech giant.

Many may not know this, but Escoabr Inc. was not allowed to showcase their extremely cheap Escobar Fold 1 in the Consumer Electronic Show 2020. The Consumer Technology Association (CTA) decided that it wouldn’t have been “a good thing” to include Escobar Fold 1.  However, Olof Gustafsson blamed Samsung for the cause:

“Samsung is afraid, afraid of us being present at the same event side by side while we present a much superior product, sold at a better price. In fact, they use their power to silence us. They forget that Pablo Escobar was there long before them and will be there long after.”

So this time around Escobar Inc. has targetted Samsung. In its official website, Escobar Fold 2 is described as the Real Samsung Killer Phone. In one of the promotional videos, the narrator narrates:

The video shows girls smashing Samsung smartphones such as the Samsung Fold and Samsung J2 Core.

Escobar Fold 2 is very similar to Samsung Galaxy Fold that was released last year. Except for the few tweaks done on the Escobar Fold 2, the design and specs remain the same as that of the Galaxy Fold. 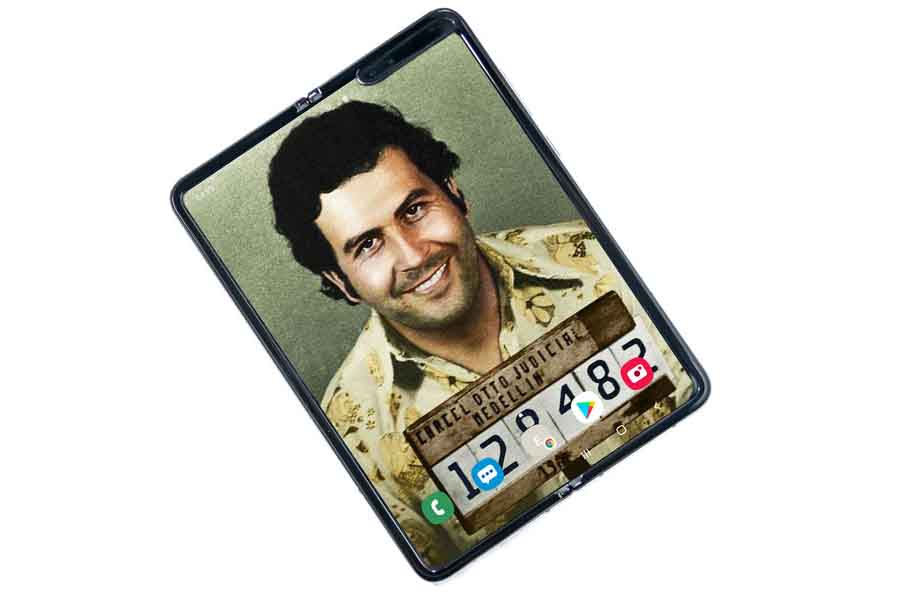 Design-wise, the Escobar Fold 2 looks similar to Samsung Galaxy Fold except for its gold-plated branding. It comes with a 4.6-inch display which can be expanded to up to 7.3-inch screen. Even the camera cut-out on the front looks similar, If it wasn’t for the Pablo Escobar wallpaper, people would easily mistake it for Samsung Galaxy Fold.

Both of the devices are powered by Snapdragon 855 chipset. They come with a massive 4,380 mAH battery and USB Type-C port for charging. Both run on the latest Android 10 out of the box. Also, the side-mounted fingerprint sensor looks similar.

Is it too good to be true?

Though the idea of getting Galaxy Fold’s specs at a cheaper price is exciting, it does raise a flag. To begin with, Escobar Inc. hasn’t started delivering the Escobar Fold 1 despite taking the orders. So, we aren’t sure about the Escobar Fold 2.