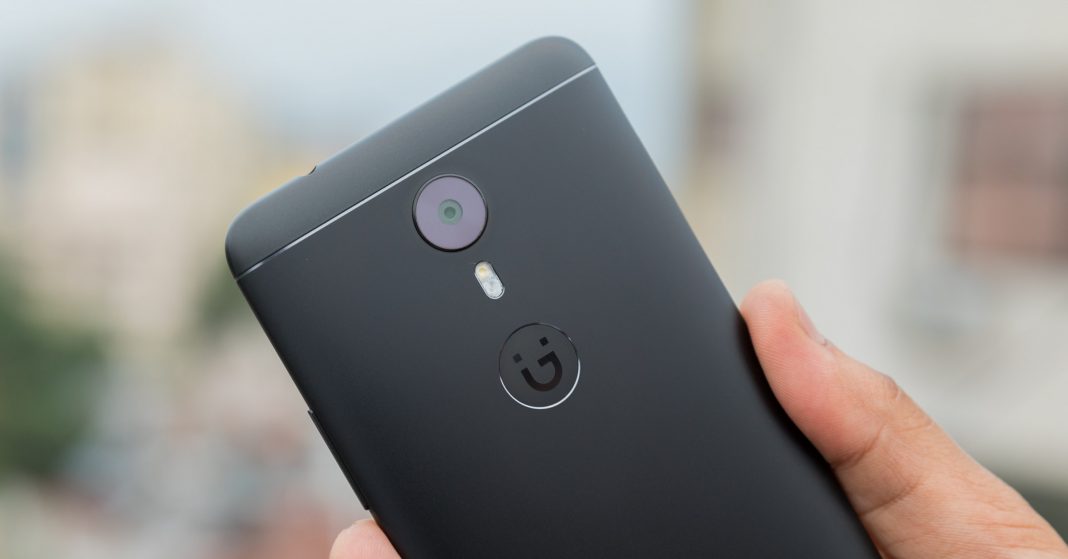 Gionee A1 Review After 2 Weeks:

Gionee A1 Review After 3 months:

Key Specs of Gionee A1: 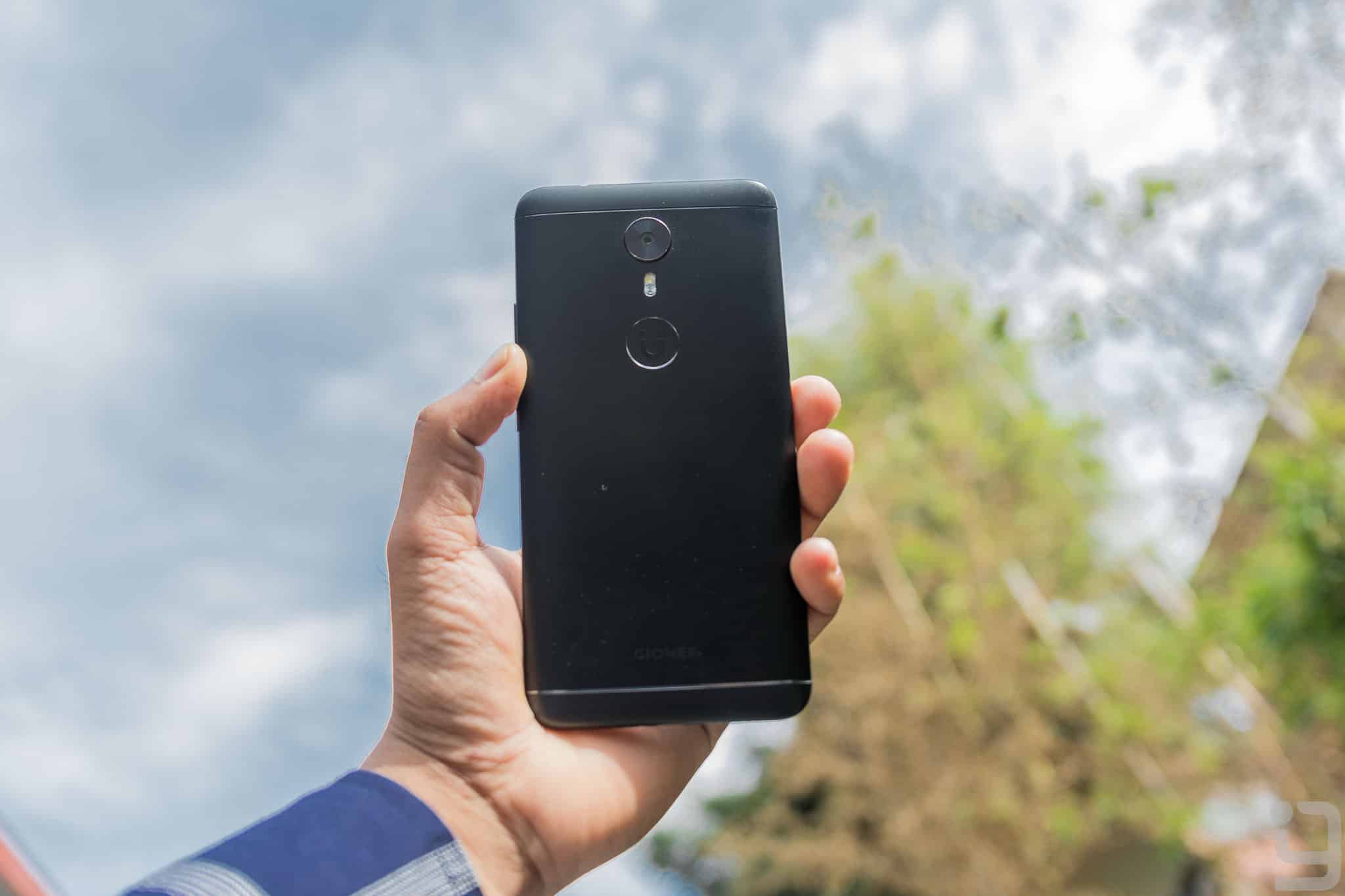 Gionee A1 is a stylish looking metal-clad phone with a design that is not so distinctive from the crowd. Yes, we’ve seen a lot of metal phones lately but the premium metal used in the phone can be realized once the phone lands on the palm. The phone is a bit heavy at 183gm and is noticeably thicker at 8.3mm. Despite its bulkiness, the phone feels good on the hands with slight curves around its edges and back. But honestly, I found the phone to be a little slippery in my everyday use. The unit I reviewed was a black one but still, it attracts noticeable smudges and fingerprints on its back. However, the power button and volume rockers on the right edge aren’t as tactile as I prefer them to be. 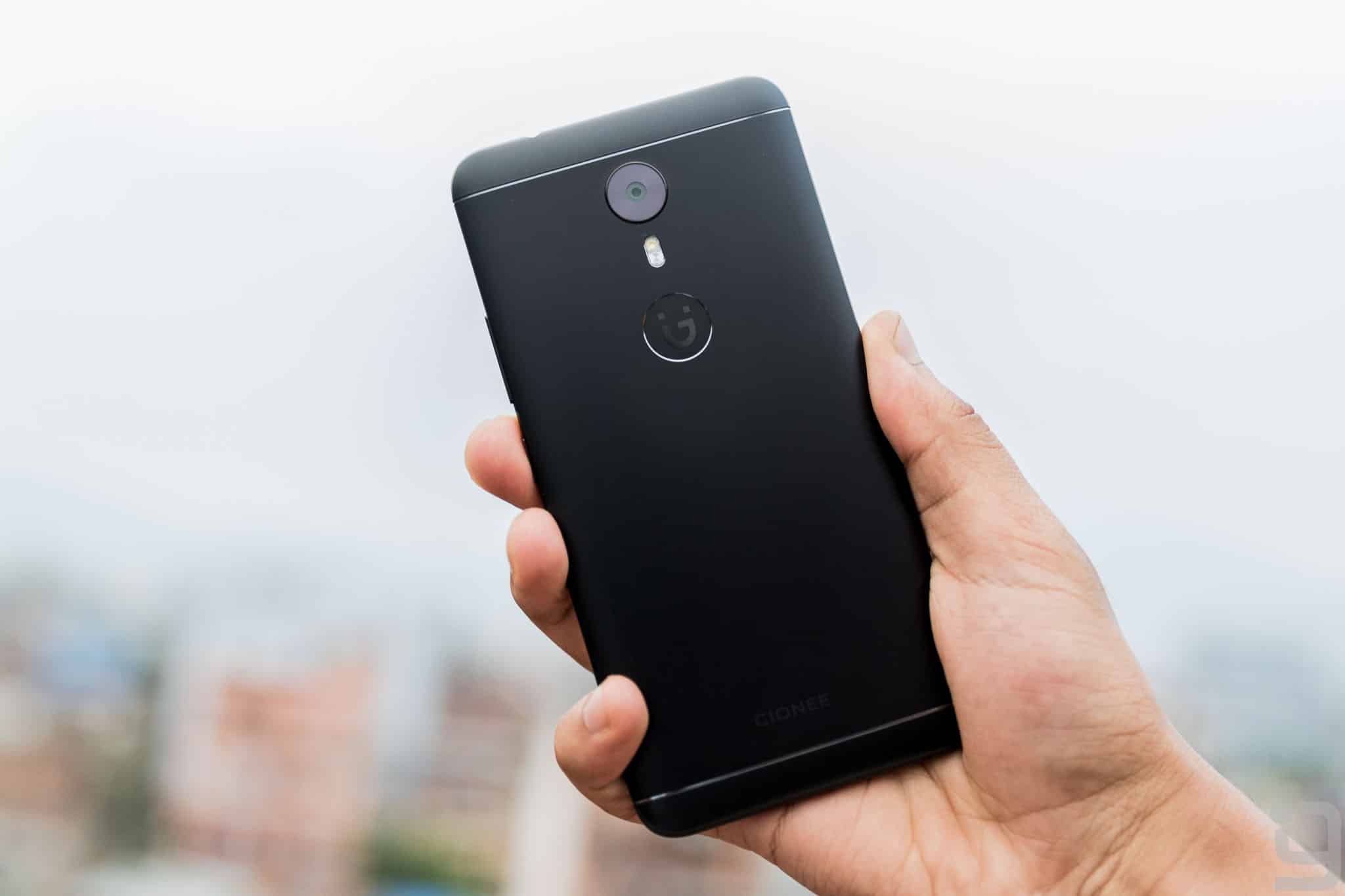 All in all, the phone has a lovable design but had it had a lesser weight to it, it definitely would have been a well-designed phone in its price range.

The phone’s 5.5inch Full HD in-cell technology display is arguably the best one in the price range. It produces nearly accurate colors and has a good level of contrast too. The brightness is sufficient enough for the outdoor usages. The best part is the option to switch white balance among cool, neutral and warm. 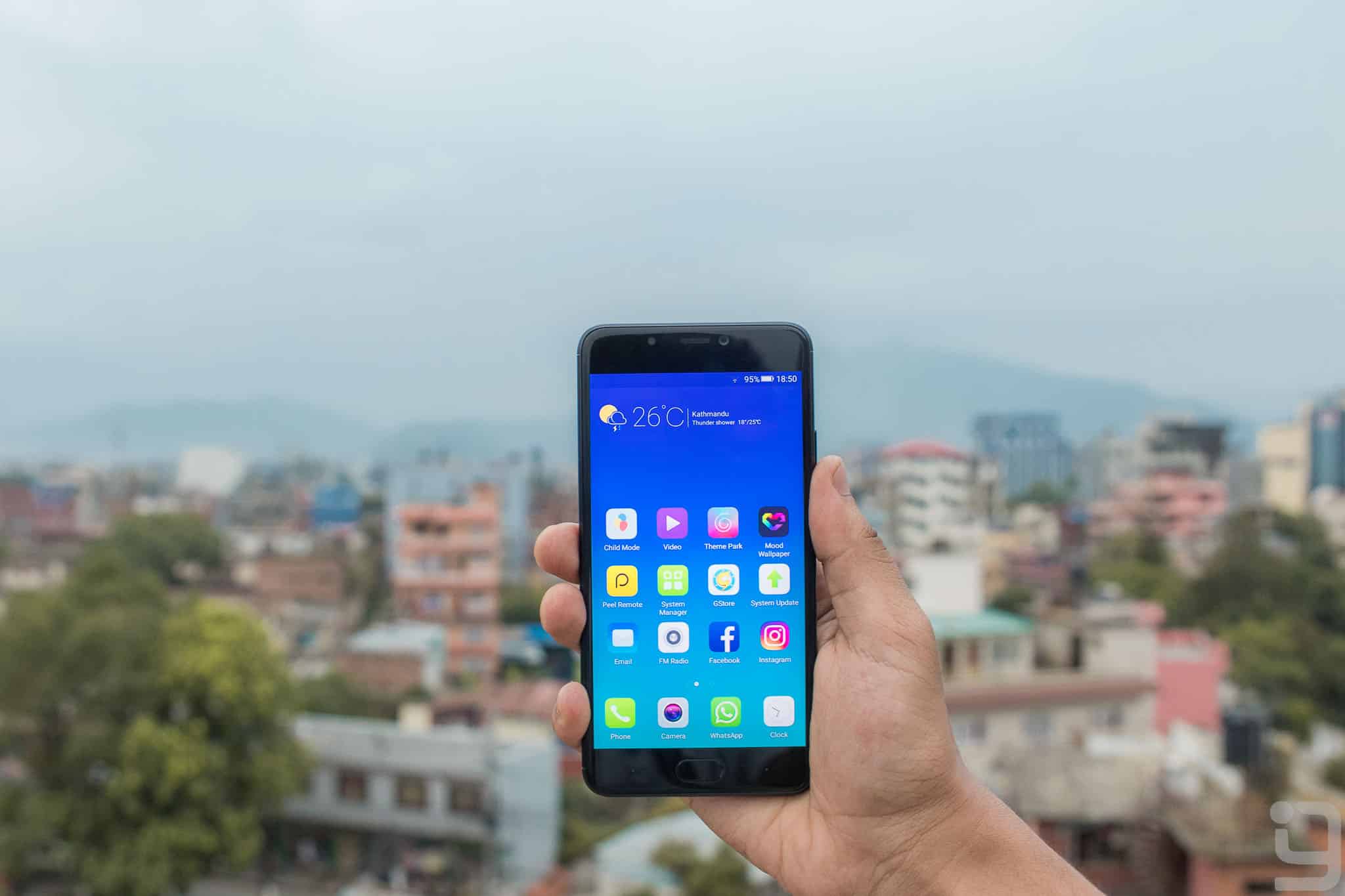 Under the hood, Gionee A1 comes with an Octa-Core MediaTek Helio P10 processor, backed by Mali-T860MP2 GPU and coupled with 4GB of RAM. This configuration isn’t the best in the price range. However, a moderate user might find this configuration to be good enough giving a smooth and responsive user experience. But once you start pushing the device with a couple of games and few other apps in the background, you can feel the device’s sluggishness. While playing few heavy titles, we noticed the frame drops and the phone got noticeably warmer in our gaming sessions. More on the heating issue, the phone kept getting warmer not just while gaming and stretched camera sessions but also on several other occasions. However, in real world use, the app loading and app switching were buttery smooth. Lastly, the fingerprint sensor is satisfyingly fast and accurate. 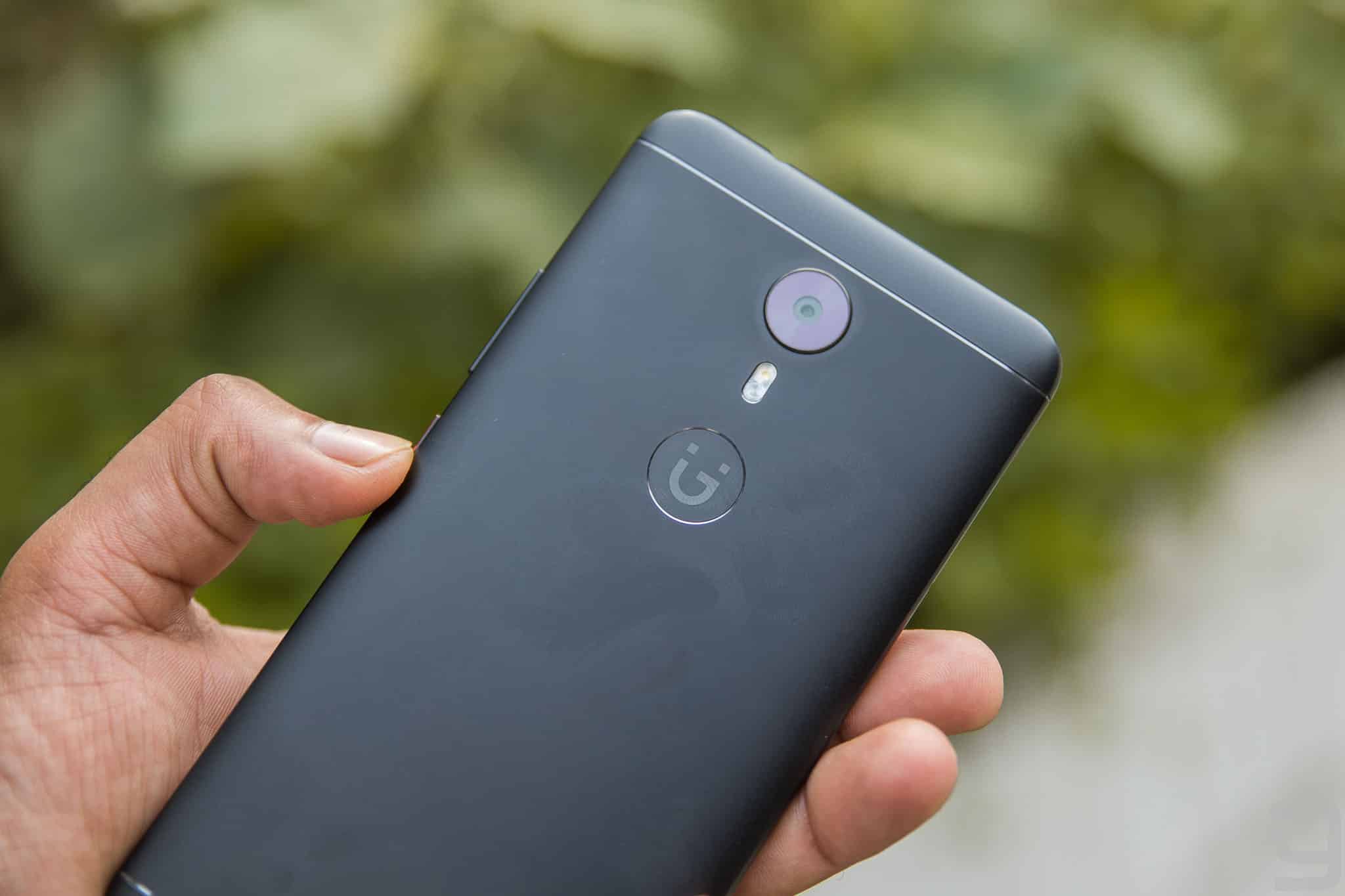 Coming to the cameras, it has a circular 13Megapixel unit with SONY IMX 258 on the back that slightly perpetuates. This primary camera is accompanied with dual tone LED flash. The camera performance when tested on different lighting conditions gave satisfying results. The photos taken outdoors came out well detailed with a good amount of saturation. The low light photos did have some noise but the camera has a night mode that helped in boosting the ambiance on low light photos. The HDR mode works well and gets triggered when needed if set on Auto.

Gionee A1 Rear Camera Samples
1 of 7

Since it’s a selfie-centric phone, it has a 16 MegaPixel front camera with f2.0 aperture. I made a decision based on selfies taken indoors, outdoors, with and without beautification and found out the phone to be pretty impressive for selfies. However, indoor selfies weren’t as detailed as the outdoor ones. And, I wish if the selfie unit came with autofocus instead of fixed focus. The phone also has a front firing flash that assisted a bit while taking photos in the night. But night selfies were a bit washed out and came with lesser details. For a beauty mode enthusiasts, this phone won’t disappoint. Plus, beautification can be enabled while taking videos and doing video calls.

The Gionee A1 boots on Android 7.0 nougat with Gionee’s own custom UI “Amigo OS” on top of it. So, this UI is far from stock Android and has been heavily customized. If you haven’t used a Gionee phone before then you might find the UI confusing at times, just like I did. If you are against bloatware, you’ll hate to see a bunch of pre-installed apps on the phone including 4 games, ADW launcher, UC Browser, along with few others. Luckily, most of them can be uninstalled. Personally, I find Amigo OS to be a bit cluttered and far from my liking. For instance, the settings menu has been heavily rearranged and I had a hard time remembering which is where. So I preferred searching for the settings other than going through the setting menu and sub menus.

Since the software is based on Android Nougat, you get all the Nougat sweetness like the split screen mode, quick reply from notifications and grouping of notifications from the same app. Additionally, the A1 has an edge bar functionality that can be accessed by swiping on the fingerprint sensor and it allows to launch your favorite apps and tasks. In addition, the phone also supports different smart gestures as well.

Gionee A1 Battery Performance
1 of 2

The A1 houses a 4010mAh battery that sounds pretty heavy on paper but in real world use, the battery life wasn’t as expected. Yes, there were times I got up to 5hours of screen on time but that was on a moderate use with no or short gaming session. The screen on time in this phone was a mixed bag since the results differed each day ranging from 3.5 hours to 5 hours. However, the charging time was one of the best aspects of this phone. Started charging from a dead battery, I could easily get 23% and 98% of charge in 15minutes and 90 minutes of time respectively. To fully charge the phone, it took me 1hour and 47minutes to be exact. So the phone’s fast charging capabilities are worth mentioning. The phone gets warmer even while charging, though the company claims just the opposite.

To wind it up, there are a few points where Gionee A1 impressed us and at the same, there are few other where the phone disappoints. The phone’s display, camera, and fast charging capabilities did impress us but its performance, bulkiness and cluttered software seriously disappointed us. So, if you are a moderate user who’s after a phone with fast charging, good cameras, and great display then you can never go wrong buying a Gionee A1. But if it’s the phone’s performance that you prioritize the most then there are quite a few other options that you might be interested in.

I’ve some personal message to Gionee and that is,
“Dear Gionee, please stop with your love for MediaTek chipsets. I am personally looking forward to seeing a Gionee phone powered by more Capable Snapdragon chipset. For instance, you could have used a Qualcomm Snapdragon 625 instead of Helio P10 that sounds pretty neck-to-neck on paper but in real world use, SD625 wins over Helio P10 big time.”

If you weren’t impressed by the Gionee A1, here are some other options you can consider:

If you already have a budget of 33K, the best is to add 10K more and buy the OnePlus 3 instead which will checkmark all the boxes for a phone with the Snapdragon 820 performance worth the price.

Coolpad’s Cool 1 dual is another phone to consider in the price range of around 30,000. This phone will easily address your needs if you prioritize on rear camera and gaming performance. Priced at Rs. 30,996, it comes with a dual 13MP rear camera and a powerful Snapdragon 652 processor.