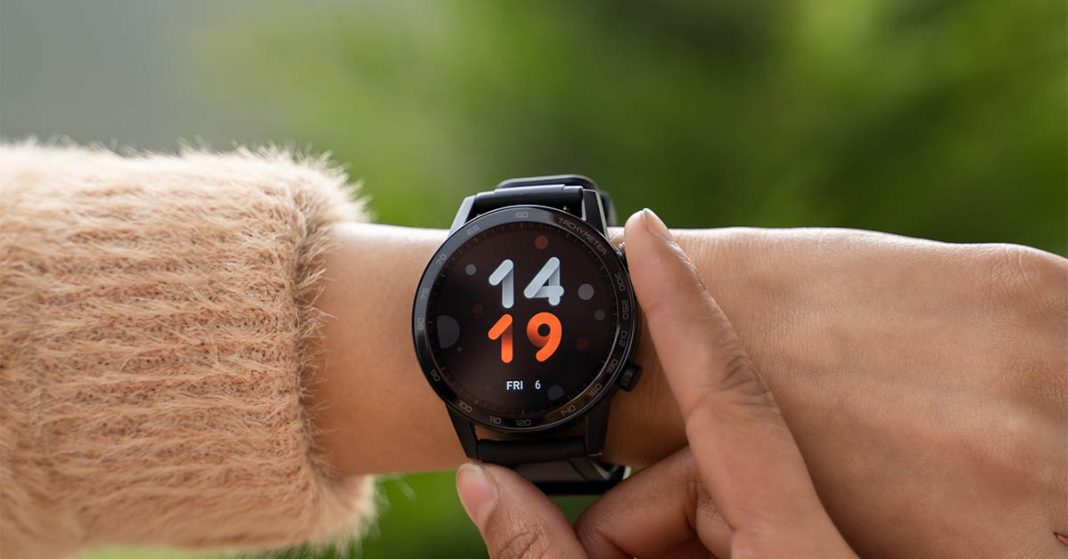 Before kicking off this review of the Honor MagicWatch 2, allow me to make a proper intro. From having to rely on separate accessories for a variety of functions to cramming them all into a pocketable gadget, humanity sure has come a long way when it boils down to making lives easier.

But we are a creature of curiosity as we strive upon improving our cumulative achievements. Wow, that got philosophical! Anyhoo, with phones getting consistently bigger, wearables, especially smartwatches are where it’s at in terms of fitness tracking and other variety of functionalities. What was once a niche, is now a multi-billion-dollar industry.

Sure, the Fitbits & Apple Watches rule the market, but they aren’t the only ones manufacturing quality smartwatches, no sir. And bringing on the heat is the Honor MagicWatch 2 with its bigger display, bigger battery, & better processor than its predecessor. Let’s discover more about this device in our review.

Starting off, this smartwatch is available in two sizes: 46mm and 42mm. The 42mm variant comes with a few visual differences than its larger 46mm counterpart, which, besides the smaller watch case, is also reflected on the dial as it doesn’t have a tachymeter.

Apart from that, the smaller size also brings about sacrifice in terms battery and thus, the 42mm variant only promises a week’s battery as opposed to 46mm’s two weeks. More on that later. The unit I’m reviewing is the bigger 46mm “Charcoal Black” variant.

Hold on, there’s another key difference I have to point out; though not between two configs of the same product. Rather, you might’ve noticed how identical it is with the Huawei Watch GT 2 that launched a month earlier, which they are.

They pack the same specs underneath and discounting the “red” accent on the top button on the MagicWatch 2, you wouldn’t be able to tell one from the other. Despite this, the Watch GT 2 is slightly costlier among the two. Well, since both Huawei and Honor are two sides of the same coin, this may be a strategy to establish Honor as an affordable brand? I don’t know for sure. Regardless, the whole thing feels very uninspiring. 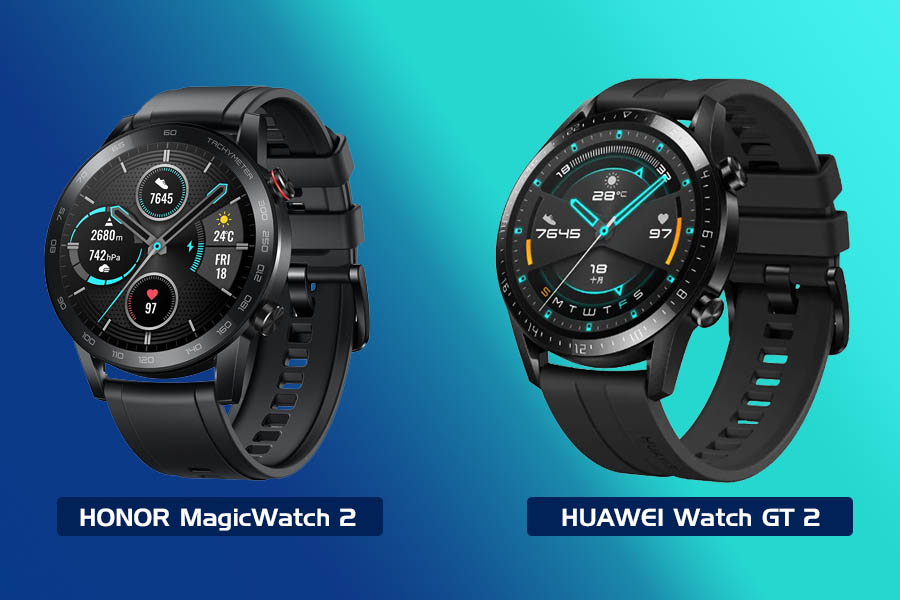 But does that indicate any sort of inferiority on the MagicWatch 2? Absolutely not.

It looks and feels as well built as any other smartwatch out there.

With stainless steel & plastic build materials used, the watch is very light on the hand and you’ll easily get used to it. There are two buttons on the right and a speaker grille beneath the two of them. Looking at the bottom, you’ll find the big heart-rate sensor, which is also where you would fit in the magnetically attaching circular charging disc.

Moreover, the 22mm rubber-made strap is also really comfortable on the hands. The watch is guaranteed to fit comfortably in hands of almost every size because of the numerous adjustment holes present in the strap. You put it on like you would an ordinary watch, though Honor has thrown in an extra band retainer for a more secure and tighter fit.

Getting to the display, you get a 1.39-inches AMOLED panel that gets plenty bright even in bright sunny outdoors, so I didn’t have any issue with its visibility. There are 6 different levels of brightness to choose from and I set my unit to “Auto”. The colors are vivid and overall, the display is nice to look at.

Similarly, there are a bunch of watch faces to choose from too. Albeit limited in number, Honor is frequently updating the selections, so I’m sure you’ll find one that’ll match your preference. Matter of fact, I’ve come to like this watch face in particular, which shows all the info you’ll need, like time, date, battery level, heart rate, temperature, and others in a very neatly organized setting. Moving to the controls, it’s pretty easy getting around on the Honor MagicWatch 2. First, let’s talk about the buttons. The top button with the red accent lists out all the apps installed including the settings, and also functions as the home button. Similarly, the bottom button can be customized to launch any installed app/setting you’d like. In my case, I’ve configured it to launch my daily activity records.

The buttons do rotate as well but don’t serve any purpose in the process. Weird.

The MagicWatch 2 also supports touch & swipe controls. A swipe to either left or right from the home screen takes you to menus like heart rate, stress, weather, music, and the activity ring. Likewise, a swipe from the top launches the basic command center, while a swipe from the bottom shows you the notifications. What’s interesting & ultimately disappointing here, is that the watch can only hold a few notifications in its memory. If you don’t clear the notifications, you won’t be alerted to new ones.

Moving on, you can go back from a certain screen by swiping to the right, while the “raise to wake screen” works like a charm every single time.

Well, this thing is designed with athletes in mind and thus, has a wide array of fitness tracking features. There are 15 goal-based workout modes like run, walk, cycle (both indoor & outdoor), cycling, hiking, triathlon, etc. You can set personal goals in each of them with regard to distance, time & calories.

The MagicWatch 2 also comes with voice-over guidance, which leads you throughout your fitness mode and also informs you of any milestone you may have achieved during it. And for any outdoor workouts, the watch also makes use of its dual-positioning GPS. I was really eager to test that out but was met with a minor level of disappointment when I got to.

Maybe it’s the geography of Kathmandu, but the watch wouldn’t latch on to GPS signal as frequently as you’d want. It wouldn’t work in my neighborhood, which is a pretty congested area. So I did a little digging to find if this was an underlying issue with the watch itself and checked out a couple of other reviews.

However, most of them vouched words of praise and how quick & accurate its GPS was. I did manage to lock-in the watch’s GPS during my walk to work and it was pretty darn accurate. This led me to the conclusion that it’s a regional issue and not something inherently wrong with the device itself. Aside from these, the Honor MagicWatch 2 also comes with heart-rate monitoring. We didn’t have an analog stethoscope lying around, so the absolute accuracy of it couldn’t be verified. Yet, I did compare it against Mi Band 4, which is known to give quite a reliable reading. In this test, both devices gave similar results, though I would lean a little heavier onto the MagicWatch 2.

There’s also a stress reading on the watch, which is an added feature compared to its predecessor. To get started & calibrate your stress level, the watch uses heart rate sensor data & a couple of option-based questionnaires. Furthermore, it has step count and sleep-tracking too, which are fairly accurate. And if you’re a devoted runner, the MagicWatch 2 also has 13 different running courses to track and improve your performance. 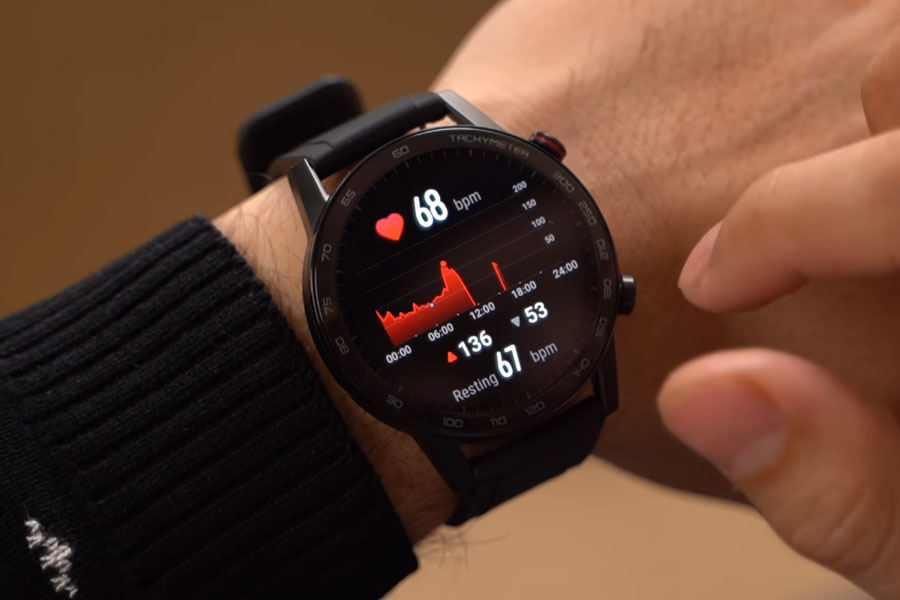 And it doesn’t end there; I told you this had a bunch of fitness tracking features! Because it is also 5ATM water-resistant, the watch makes full use it by allowing you to monitor your swimming performance in depth. This includes heart rate, SWOLF analysis, and more during your swimming session.

What’s more, the MagicWatch 2 is also capable of VO2 Max calculation, but I wouldn’t put my money on it for its precision. You can view all of your workout records on the watch itself, though it can be analyzed in greater detail on the app, which is the “Huawei Health”.

Full disclosure, though the app is available on both Android and iOS platforms, there’s an important warning that I have to deliver:

If you’re planning to use the Honor MagicWatch 2 alongside an iphone, don’t.

With that out of the way, you’re still prompted to install “Huawei Mobile Services” in order to be able to use the Huawei Health app. The home screen shows you the basic info about your fitness records including sleep, heart rate, stress, and more. There’s a dedicated “Exercise” tab where you can initiate different workouts. I made use of it when the watch’s GPS wouldn’t latch in, and had to use the phone’s GPS.

Music from a watch?

More on the right, you can view the list of Huawei/Honor watches added to the phone and change their settings as you’d like. Remember how I said the MagicWatch 2 has a speaker? That’s for playing music or using it as a speakerphone.

Using the app, you can transfer music to the watch itself for playing them online, and Honor has set aside 2GB of the total 4GB for that purpose. Felt like I somehow teleported to 2012 while transferring music from my phone to the watch! If that’s not your jam, you can control the playback of music playing on your phone too.

You can also link the Huawei Health’s data to Google Fit and it works pretty well. Be that as it may, the automatic synchronization of data between the two apps was quite dawdling, so I would frequently perform a manual data-sync. Besides these, you can view/edit your personal info, review weekly/monthly performances, etc. too.

If you were ever on the fence about battery life on smartwatches, the Honor MagicWatch 2 will surprise you. It’s got a big 455mAh battery, which the company promises will last two full weeks. And in my testing, the watch absolutely delivered on that promise.

I had turned on active heart rate & stress monitoring, sleep analysis and even played music a couple of times just for the heck of it, and the watch managed to last me exactly two weeks, which is impressive.

Charging the MagicWatch 2
1 of 2

The splendid battery life may also be thanks to Huawei’s custom energy-efficient Kirin A1 chip and the LiteOS powering the MagicWatch 2. Despite LiteOS aiding in better battery endurance, it also leads to the eventual downfall of the experience on the device.

Honor MagicWatch 2’s LiteOS is not so great, to put it gently.

The UI is pretty well designed and all, but it’s just not fluent enough. You’re bound to come across a noticeable level of stutter here and there while operating the watch. But I wish that was the end of it. The problem is, the MagicWatch 2 doesn’t run on WearOS from Google. This means:

You can only view and clear the notifications received in terms of actions to perform on them. So much for a “smart” watch!

What’s left? Yes, you can also make and receive calls directly from the watch, as it has a microphone and a built-in speaker. The call quality is great (both on receiver & caller’s end) with voices being heard clearly.

However, that was not the case in a noisy outdoor situation. Also, the speaker is quite easy to block, especially if you wear the watch on your left hand.

All in all, the Honor MagicWatch 2 is a great fitness tracker with a horde of workout modes to record and revise. Apart from that, it is very well built and feels comfortable on the hands, while also looking fashionable. That’s not all, the battery on it also lasts way longer than what we’ve come to expect from a smartwatch.

With so much going for it, the MagicWatch 2 is sadly not a perfect alternative. In fact, the watch skimps so much on “smart” features because of its LiteOS. But if you’re someone who doesn’t care about that and are just looking for a great fitness tracker, then this one’s for you.