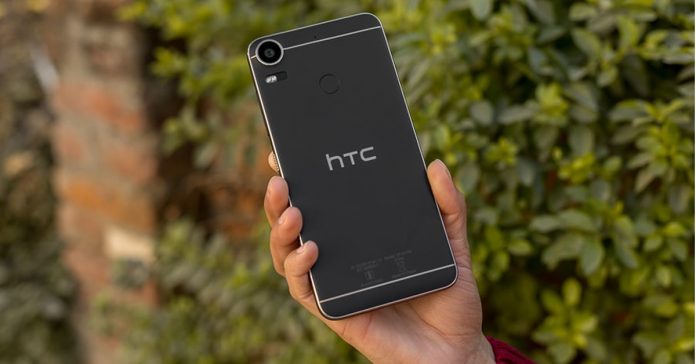 In terms of design, HTC Desire 10 Pro is obviously one of the most stylish smartphones available in the market right now. The device is wrapped in a polycarbonate body and is remarkably light. In spite of having a polycarbonate body, the device does not seem or feel cheap. The device possesses matte-finished rubberized back crafted with gold accent around the edges and on the rim of the camera. This special contour has given a premium and stylish look to the device.  And because of the lightweight and elegant aesthetics, my experience on holding and using the device was pretty delightful. All the tactile buttons of the device are placed meticulously on the right edge of the phone. Power button lies at an absolute center of the right edge, which too possesses gold accent and a palpable texture like the Moto E4 Plus. And the volume rockers lies just above the power button.

HTC Desire 10 Pro does not fall in the group of smartphones with a bezel-less display. It still has thick bezels on the forehead and the chin. The bezel on the forehead has been the habitat for the front camera, notification LED, earpiece, proximity and ambient light sensor. The lower bezel or the chin has the capacitive touch buttons embedded on it. With capacitive buttons on the chin, I did not have to sacrifice the lower portion of the screen and had been able to make full use of it.

On the left edge of the device, there lies a SIM card tray, where two Nano SIM cards can be adjusted. If you need to expand the storage, SIM2 needs to be removed from the tray to provide space for the SDcard. Not much of a surprise, there is still a 3.5mm headphone jack on the HTC Desire 10 Pro. HTC allotted space for the jack on the top, placing charging port and speaker grill on the bottom. HTC has provided Boom Sound to this device. However, due to the absence of stereo speakers on the phone, the feature comes into action only when earphones are inserted.

The smartphone embraces 5.5-inch IPS LCD display and comes with an aspect ratio of 16:9. In terms of resolution, the smartphone joins the league with Full-HD types and possesses a pixel density of 401PPI. The display is somewhat sturdy and scratch-resistant with Gorilla Glass 4 protection. The viewing angle of the display is decent and the color accuracy is close to natural. The brightness of the display is ample and one may find no issues under normal lighting condition. However, in the broad daylight or in the direct sunlight, it is a little distressing to perceive the entire details within the screen.

The smartphone is also privileged with an ambient light sensor and an automatic brightness option. So with this mode turned on, you do not need to tune the brightness every now and then.

Desire 10 Pro is a camera-centric smartphone. A 20MP camera resides on the back, which comes with f/2.2 aperture, Dual-LED flash, and laser autofocus. The camera is not just rich in the megapixel count but also on the quality of images it produces. The images possess good dynamic range and pack acute details of the objects in the frame. Also, the camera is dexterous on producing images with natural-like color reproduction. Even while taking portrait shots, the device astounds the photographers with its charismatic potential. However, because of the narrow aperture, depth of field generally lacks shallowness (the blurs in the background in Bokeh effect). Low light shots are also pretty impressive with the device. Images shot under dim light or during the nights invite negligible amount of noises and grains, which are generally inconspicuous even when zoomed in. The rear camera also possesses the pro mode where one can tweak the white balance, shutter speed, and ISO values if the auto mode failed to replicate a satisfactory shot. And the best thing about the pro mode is, it can save the images in RAW format. Up front, there is a 13MP camera dedicated to the selfies. The front shooter too captures great selfies readily uploadable on the social media like Facebook and Instagram. There is also a makeup mode for the selfie fanatics, who are used to with the instant beautification. In addition, there is a selfie panorama mode, which could be useful for taking wide-angle selfies. This mode can be a savior while taking a selfie among a large group of friends. Despite being a great performer on taking still shots, the device gets a little less fascinating in the videography section. The device records only Full-HD videos at max and shooting a 4K video is not its cup of tea. But for those who are not resolute on the 4K recording inability, the device may entertain with its Zoe camera and Hyperlapse mode. The Zoe camera mode helps the user record a video of three seconds with sound. This feature could be handy when recording a moment, which could not be captured in an image. The Hyperlapse mode, however, captures time-lapse videos at the speed of 2x to 12x. And what excited me of all was the feature which let me alter the speed of the Hyperlapse videos even later.

The device is powered by MediaTek Helio P10 chipset, which houses an Octa-core CPU clocked at 1.8GHz. The device has embraced Mali-T860MP2 GPU to process and monitor the graphics related tasks within it. And in terms of RAM and ROM, the device lacks variants and only comes in 4GB RAM and 64GB onboard storage format. With a whopping 4GB of RAM, multitasking is delightful in this phone. Even on switching and multitasking the heavy apps and games, the smartphone does not break into a sweat.

MediaTek has been a diverting name as a chipset in the smartphone market these days because of the users’ preference for Qualcomm’s Snapdragon chipset. Despite the presence of a MediaTek chipset on the phone, I find no issues on it regarding its performance during my time of use. Even on playing high-end games likes Asphalt 8, Dead Trigger 2, Dream League Soccer, PES 2018, etc., I did not find any lags and stutters. On lingering with the aforementioned games, the device warmed up a little. Such warmth in smartphones is generally obvious with graphics-intense games like that.

The smartphone runs on Android Marshmallow (v6.0). The outdated OS on the phone turned me off, to be honest. But that sourness abruptly faded away when I received a notification about the software update. Not just one, there were back-to-back two updates for the device. However, the updates were for the bug fixes and security patches, the device still runs on Android Marshmallow.

The smartphone is not free from bloatware. It has given spaces for the apps like Boost+, Zoe Video Editor, News Republic, etc. Boost+, as the name implies, dedicates itself to boosting the performance by optimizing apps and clearing junk files. Zoe editor comes handy when making amendments to the videos on the device. This app is also quite useful for making a slideshow like videos using the images and selecting a suitable sound clip. The News Republic app gathers news articles from reputed sources all around the globe and stacks them by classifying on a number of categories.

The device also includes other fancy methods for unlocking the device like Face Unlock and Voice unlock in smart unlock option. However, these means for security are not reliable and can be fooled easily. I tried using the image of a registered face from another smartphone, surprisingly, the smartphone unlocked without any messages. The smartphone takes a little more than a second to unlock the device using Face Unlock. Also, under low lights, this feature is absolutely useless. So choosing a fast and reliable fingerprint sensor over the sluggish and unreliable Face Unlock is an absolute no-brainer.

Focusing on fancy design and remarkable cameras, HTC seems to have given less attention to the battery. A 3000mAh battery juices the smartphone. This value is not on par with the smartphones of the similar price range. Not just on the paper, the smartphone failed to provide a prolonged battery life even on the real-life scenario.

Even on normal use, the smartphone failed to back me up for one complete day. With 4-5 hours of screen-on-time, the backup may disappoint the power users. However, the smartphone comes with a fast charging technology (5V/2A), who hates the prolonged company of smartphone with the wall charger. HTC Desire 10 Pro gets completely juiced up (0-100%) in less than one and half hours.

I had used the smartphone for two weeks and those are my insights regarding the phone. What do you think of the phone? Does it fall on your radar of choices? Let us know in the comment section.