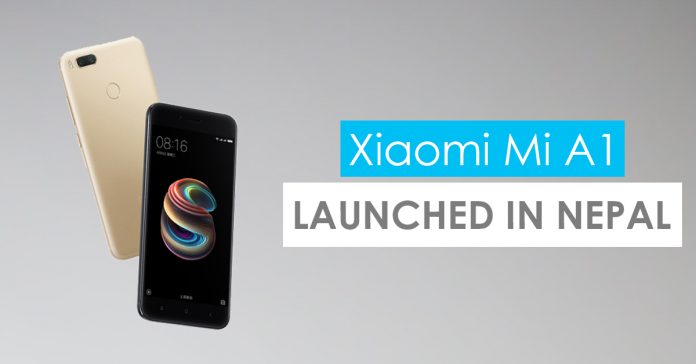 After weeks of rumors, Vatsal Impex & Teletalk, the official distributor for Xiaomi in Nepal, has launched Xiaomi Mi A1. The Mi A1 has lately come into light due to the fact that it is Android One smartphone. The smartphone is meant for those who want Google’s stock software at a cheaper price tag.

The Xiaomi Mi A1 has Android v7.0 Nougat inside with no skin on top. The Chinese manufacturers have opted for the simplest and finest form of Android Google provides in this smartphone. The Mi A1 is already in line to receive Android v8.0 Oreo update and will be among the first devices to receive Android P next year.

The Xiaomi Mi A1 comes with a 5.5-inch display LTPS IPS LCD with the resolution of 1080 x 1920 pixels. This display is protected by Corning Gorilla Glass for that extra protection against drops and scratches. This device is powered by the 14nm Qualcomm Snapdragon 625 SoC that goes along with the Octa-core CPU with 2.0 GHz clock speed. For gaming purpose, the device packs Adreno 506 which gets its help from 4 GB of RAM. Storage wise, it has 64 GB onboard storage which is expandable up to 128 GB but uses SIM 2 slot. As far as photography is concerned, Xiaomi has offered dual 12-megapixel rear-facing cameras on the device. These cameras work together to serve 2x zoom functionality. One of the cameras has f/2.2 aperture while the other one features f/2.6 aperture. These cameras are accompanied by dual tone LED flash. For selfie enthusiasts, the device has a 5-megapixel front-facing camera which unlike the rear cameras which shoot 4K, only captures 1080p videos.

The Xiaomi Mi A1 has a non-removable 3,080 mAh Li-ion battery. This device is engraved with a sound amplifier to enrich that audio experience. Xiaomi is offering 1-year insurance, 2 year warranty and sure shot gift with the Xiaomi Mi A1.

Xiaomi Mi A1 specifications in a nutshell: