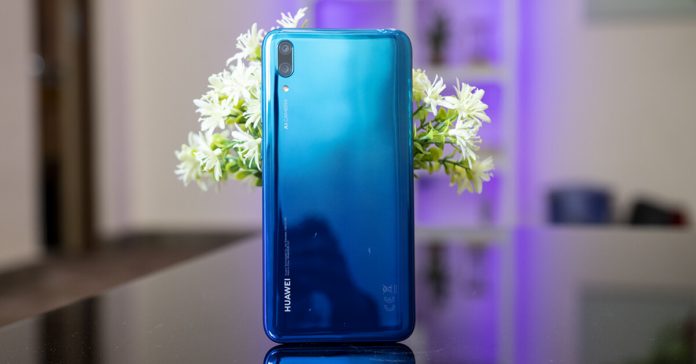 Huawei has added to its budget lineup another smartphone, the Huawei Y7 Pro 2019. This device seems like a design-centric smartphone and to many, it may seem so by its looks. Other than design, what fancy features have the smartphone packed inside it? Let’s find that out in this Huawei Y7 Pro 2019 Review.

The Huawei Y7 Pro 2019 at first glance looks very appealing. It has sleek plastic construction, no doubts on that, but considering the price, you get quite a deal. The gradient back here is eye-candy and the Blue color stands out from the rest effortlessly. The design looks minimalistic, with very few elements at the back. However, the Huawei branding on the front doesn’t look quite convincing since there is also another one on the back. Maybe to utilize the chin at the bottom!

You get all your buttons on the right which are decently tactile, dual bottom firing speakers and a headphone jack at the top. While this might seem like an unusual placement, you get used to it pretty easily. The speaker grill at the top is also the house for an LED indicator which is a little dim to my liking.

Having said that, the phone does not feel that cheap on hands and as I said earlier does not look inexpensive either. Huawei seems to have worked its way through pretty well here.

The display is 6.26 inches in measurement with HD+ resolution and though it does not particularly stand out, it is not bad. There is a U-shaped notch up front which, for some reason covers some area than it should. Nonetheless, it’s a big and colorful display with ample brightness even outdoors. Only while watching YouTube videos, the display seems to lack the punch but maybe that’s because we are from the Full-HD displays. Otherwise, this one gets on pretty well, especially on normal usage. And like every phone on today’s date, this IPS panel has good viewing angles too. So, in the overall, this display is okay at best for the price tag.

Being a budget-oriented phone, we were quite concerned about the camera abilities of the phone. However, the phone performed decently well in our camera test. Talking about the camera hardware, this one follows the trend of having dual cameras with it’s 13 MP and 2 MP sensors at the back. And as mentioned earlier, this one is surprisingly good.

Although the details are quite lacking, Colors pops out in the captured images. And that’s okay as long as the pictures look good to the eyes.

Having said that the camera does struggle for a while to focus on objects. But the end result is always good in good lighting conditions. Portrait shots look decent too. You don’t get proper edge separation though! Have a look at these samples here and be the judge yourself.

Likewise, the HDR option is something that could improve in future generations as there is barely any noticeable difference with it turned on and off. There is also an AI option that does very subtle color changes in pictures.

In low lighting conditions, however, you will get muddy images. For a budget phone, that’s understandable, so let’s not go on about it.

The selfies, on the other hand, are good and detailed with its 16MP sensor. They are colorful and natural too. There is no selfie portrait feature though, which might let down some expectations.

The performance in Y7 Pro 2019 is backed by the SD 450, which is an upgrade over last year’s Snapdragon 430, but it is still an okay performer. The phone’s performance is moderate in terms of app opening and even while switching between them. PUBG is playable in low settings with stutters time and again. Low end to mid-tier games run well on this device. But on normal use, there isn’t much to complain.

You get 32 GB internal memory for use that is expandable up to 512 GB but in order to do so, you will have to sacrifice on a SIM slot. The available 3GB RAM is quite a standard for the price being asked, so it’s well and good! 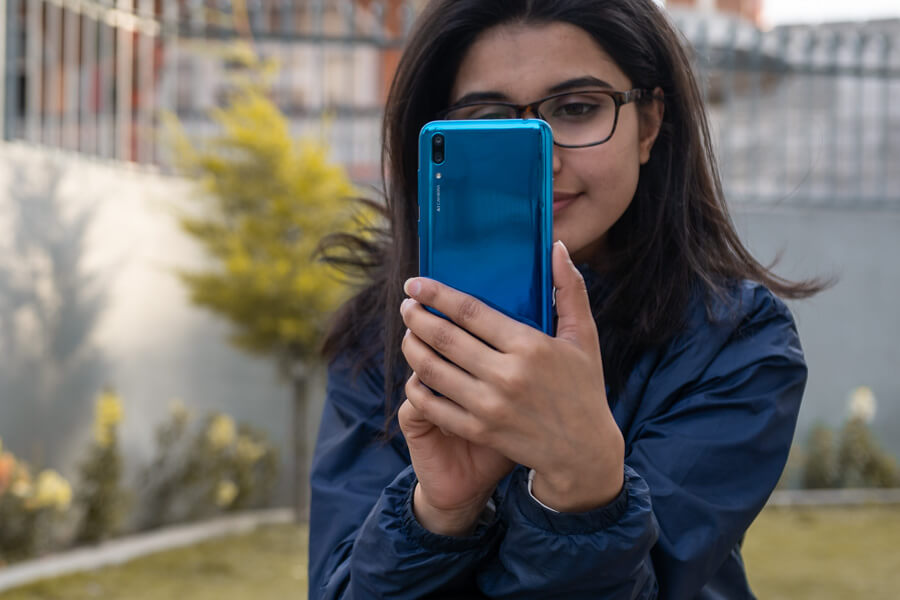 But a huge downside to this device is the absence of a fingerprint sensor. In 2019, it kinda feels strange not having it on your phone. There is also a facial unlock feature, which is a bit slow but gets it correct most of the times.

So, the performance side of it just average, and what competitors are offering in this price range, I hope Huawei will improve in coming generations.

On the software side, there is Android Oreo out of the box with Huawei’s custom skin EMUI 8.2 on the top. Since most of the smartphones in 2019 comes with Android Pie, it is quite a bummer to see the Android Oreo here. Even the cheaper Y6 Pro 2019 comes with Android Pie so Huawei’s strategy here doesn’t look quite plausible. Nonetheless, Huawei said to roll out an update for this device very soon. So there is nothing to worry yet.

Talking about the EMUI, there are tons of bloatware like most of Huawei phones. Some of them can be uninstalled or disabled but most of them cannot be uninstalled. Since the phone has merely 32GB of RAM, the presence of bloatware reduces the available storage. Other than that, there is nothing much to discuss on the software front. So let’s move forward.

This device, if nothing else, excels in the battery department. The 4,000 mAh battery does hold up well for 2 days in a row on normal usage. Watching videos and playing games do drain it a bit faster, but even so, you get over one day of battery, which is commendable. Of course, the HD display has a huge role to play in this! However, what’s painful is the charging time which goes up to more than 2.5 hours.

So, for Rs. 18,490 you get a decent phone in the form of Y7 Pro 2019. It has a good set of cameras, a very good design, and great battery backup. And actually, the phone is priced pretty competitively in Nepal. So, in Nepal, this device is a decent deal to look at all thanks to the competition!