Ola Electronics Pvt. Ltd., the authorized distributor of Infinix mobiles in Nepal, has officially unveiled a new smartphone — the Infinix Note 7. It’s a mid-range smartphone priced at Rs. 21,990 and will go head to head against the Redmi Note 9 and the Galaxy A21s.

Talking at the launch, Senior Management of Ola Electronics said, “With the objective to bring international standards of aftersales and service, Ola wants to continue to delight its customers and channel partners with the launch of the new Infinix Note 7.” The company also promises to bring new Infinix products in Nepal at an aggressive price.

Infinix Note 7 features a 6.95-inch screen with a tall 20:5:9 aspect ratio. There is a tiny circular cut-out on the top left part of the screen, where resides a selfie camera. The device boasts an impressive screen to body ratio of 91.5%.

It also looks gorgeous with the Gem Cut finish on the rear panel and side frames which reveal subtle patterns and highlight from different angles. On the back, there is a circular camera bump for the quad-camera setup. Other than that, the rear panel looks clean thanks to the side-mounted fingerprint sensor. 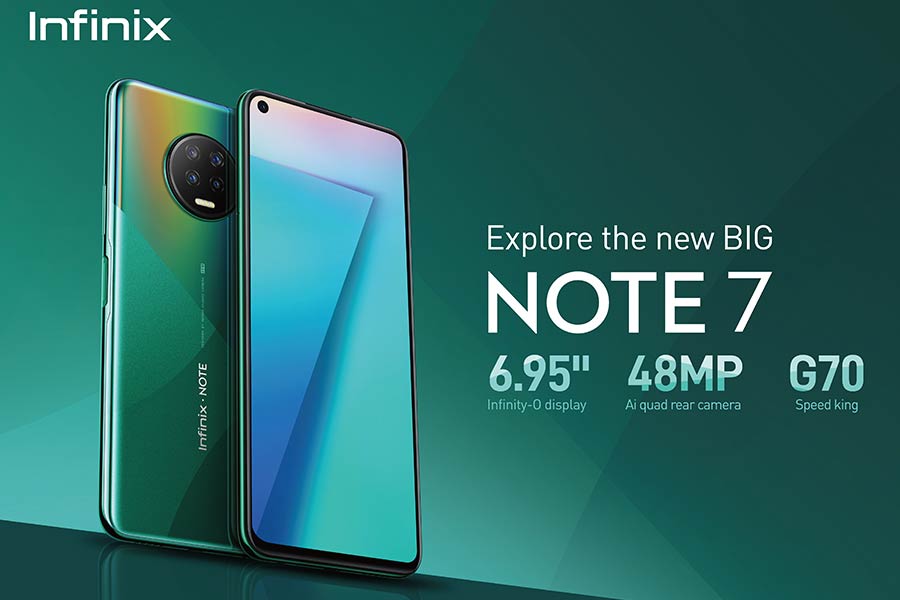 MediaTek’s gaming-focused Helio G70 powers the device. Helio G70 is a decent performer in the budget segment as we saw in Realme C3. Inifnix claims 90% single CPU frequency upgrade, 43% multi-CPU frequency boost, and 100% GPU image rendering frequency boost in this one compared to its predecessor Infinix Note 6. The chipset is backed by 4GB of RAM and 128GB of internal storage.

Infinix Note 7 flaunts a 48MP quad-camera setup on the back. The camera lenses are protected by a layer of Corning Gorilla Glass. The primary 48MP camera comes with 1.6-micron Pixel size and f/1.79 aperture. It is accompanied by a 2MP depth sensor, a 2MP macro sensor, and a dedicated low light video camera. The camera bump encloses the quad-LED flash arrangement, which looks similar to the Oneplus 7T. There is a 16MP selfie camera on the front.

The device gets its juice from a 5,000mAh battery which comes with support for 18W SuperCharge 3.0. For security, Infinix has included a capacitive fingerprint sensor on the side and face unlock feature. The device ships with XOS 6.0 based on Android 10. Other features include smart gesture, Live Transcribe, and Wi-Fi sharing.

The official price of Infinix Note 7 in Nepal is Rs. 21,990. This price is for the 4GB RAM and 128GB storage variants. It goes on sale starting the 14th of August through various mobile retail shops all over Nepal.