Home Opinion Why Does iPhone 8 Even Exist? 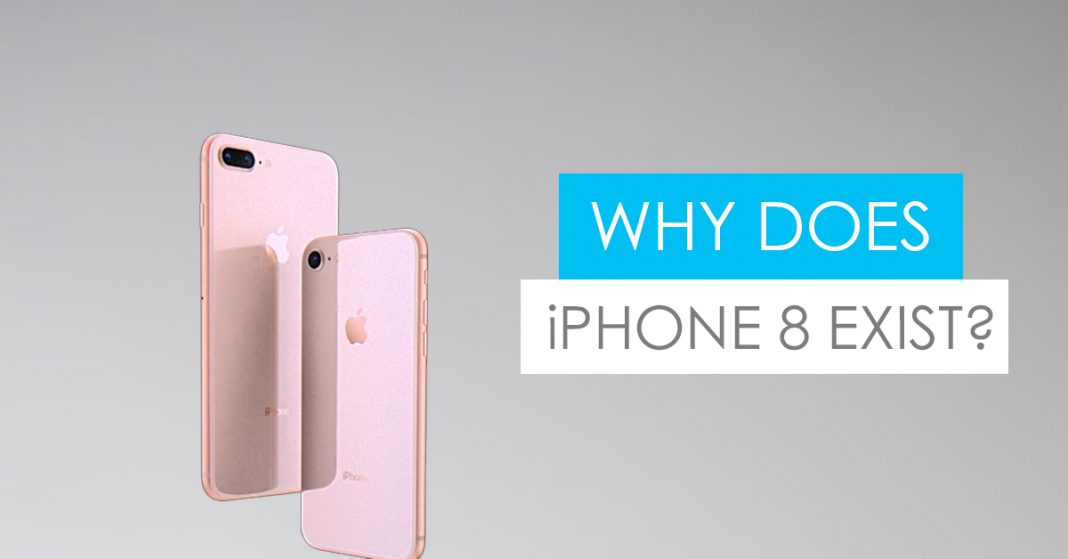 Apple announced three new iPhones, Apple Watch and an upgraded Apple TV in the new Steve Jobs Theater on September 12, 2017. Although other devices were released in the keynote this is a big year for the iPhone and the Apple as it is already a decade since the release of the first iPhone. The new iPhones have stirred up speculations of the tech industry regarding the choice of a single iPhone between the three.

Don’t Miss: Apple iPhone 8 and 8 Plus Price in Nepal

The design of iPhone has not changed since 2014 when Apple had launched the iPhone 6 with an aluminum unibody design. Apple now looks a lot less innovative with every release, all while Android devices are getting more innovative with software and hardware. We are living at a time where it is hard for any iPhone user to say that iPhone is the best smartphone there is. If it was any other time, the new iPhone 8 and 8 Plus would have been called the iPhone 7s and 7s Plus with a few upgraded specs and changes up its sleeve, as they share the same design with the previous iPhone. With the release of the hyped bezel-less iPhone X that will probably shadow the sale iPhone 8, it begs a question – why does iPhone 8 even exist? The iPhone 8 and 8 Plus have glass bodies that feature wireless charging which looks like a fusion of the older iPhone 4 and iPhone 7. The new phones have what Apple calls the most durable glass in any smartphone with reinforced aerospace grade steel and aluminum frame. The iPhone 8 has 4.7-inch Retina HD display while the iPhone 8 Plus has 5.5-inch Retina HD display. Both the displays adopt true tone technology, which adapts the color temperature and intensity to ambient light. The devices feature the A11 Bionic chip, which is 20 – 70% faster than previous generation chipsets. The new iPhone 8 and 8 Plus have improved cameras that can take brighter and more vibrant photos than the iPhone 7 and 7 Plus. The most noticeable change in iPhone 8 and the iPhone 8 Plus is the glass back to support wireless charging. Apple has chosen to go for Qi certified inductive wireless charging standard rather than for some proprietary standard charger.

Although the iPhone 8 and 8 Plus is considered as flagship devices by the Apple, the announcement of iPhone X with an edge to edge OLED display has cannibalized the sales and preorder of the iPhone 8 and the iPhone 8 Plus. The display on the iPhone X has a resolution of 2436 x 1125 pixels on a 5.8-inch diagonal screen. The iPhone X also has HDR, 3D touch and True Tone Display like its brothers. The entire device is covered by the screen except for a notch that houses camera and sensors for the Face- ID among others. To incorporate the entire screen, Apple had to make some sacrifices. It ditched Touch ID for Face ID. The company has put lots of interesting technology behind the notch for Face ID. Its sensors have TrueDepth system, which has an infrared camera that creates a 3D map of the face that, in turn, can even unlock your phone even in the dark. Face ID is powered by a dual-core neural engine that adapts to your face and prevents the phone to be unlocked by a photo of you. However, at the keynote, Apple failed to show the demonstration in their first try.

Another problem that Apple fans have to deal with the new devices is their price. The price for the iPhone X is whopping $1000, around $300 more than the iPhone 8 and Samsung Galaxy S8. This price point has really confused customers whether to wait for the iPhone X that will be in store on November 3, go for cheaper variants of the iPhone or switch to android.

So, with the design that backs to 2014 and release of the more premium iPhone X, it is somewhat confusing. Why does iPhone 8 even exist and why should we buy iPhone 8 or 8 Plus rather than iPhone X?

Thanks, Ashwin Pradhan for the tip.