Home Bluetooth Speaker JBL Pulse 4 Review: Have you ever seen the music? 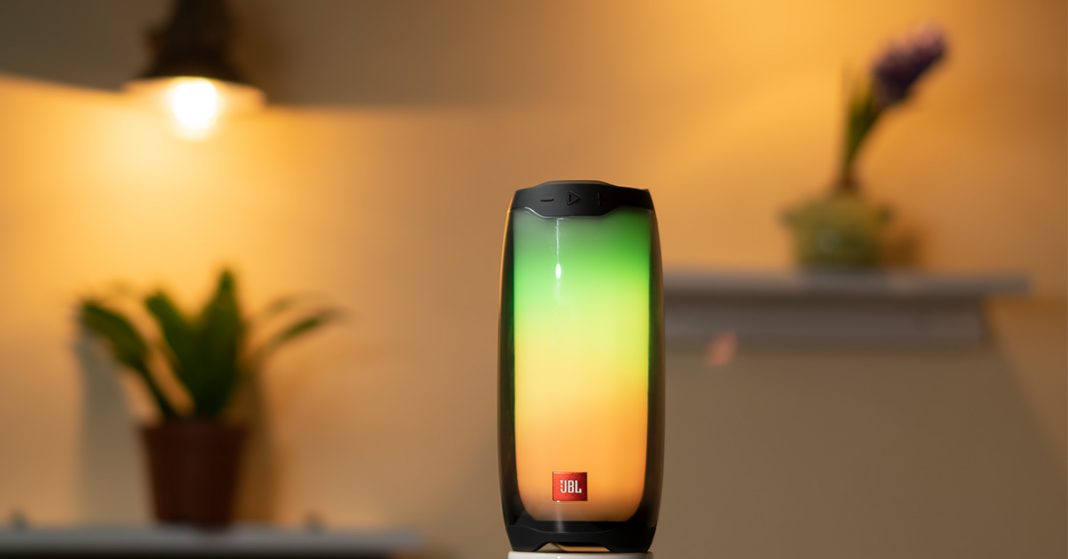 D’you remember back in the day when people used to walk the streets with a big boombox on their shoulders, rocking their favorite tunes while ramping up the neighborhood? Man, that’s old-school! Well, that level of swagger is no more mainstream as the new generation has moved along to headphones and AirPods. But that doesn’t mean portable speakers have lost their mark, no. We’ve reviewed a bunch of them and though they’re definitely not as cool as carrying a boombox, their sound quality is impressive nevertheless. And in the horde of portable Bluetooth speakers is the new JBL Pulse 4. With its scintillating lights and powerful audio, it definitely stands out, to say the least. Still, how does it sound, how durable it is – I’ll answer all those questions in this review!

Starting with the design, JBL has walked the radical road with the new Pulse 4. The previous Pulse 3 came with a transparent plastic covering the LEDs taking up about two-thirds of the body, while the bottom of the speaker had the wire-mesh amplifier mask, covering the transducers inside. However, Pulse 4 has a wider light show mechanism, with the LEDs going throughout the body of the speaker, which is protected by a hard-plastic outside. Similarly, rubberized padding runs along the top and the bottom of the speaker.

The new Pulse 4 is also shorter and surprisingly heavier than the Pulse 3. 2017’s Pulse 3 was about 8.8-inches tall and weighed 960 grams, while the new Pulse 4 is a little smaller at 8.15-inches but is a bit hefty at 1.26 kilograms. Though I don’t have the exact justification for the smaller size (maybe some cost-saving?), the increment in mass is definitely because of the bigger battery, which I’ll get into in more detail later in the review.

Moreover, all the control buttons reside on the top of the speaker. JBL has coupled the buttons according to their relativity; the power & Bluetooth buttons are paired together, so are the PartyBoost & lightshow buttons, and finally the audio control buttons. Here, only the former two pairs have an LED indicator and are placed inside a debossed structure. On the other hand, the volume up, playback control (single press to play/pause, double press to skip a track), and volume down buttons lack an LED indication, though they are easy to recognize upon feeling them and have a quick response too.

Adding to the distinctions is the USB-C charging port (yes, thankfully) which lays wide open next to the LED battery indicator. About that, the indicator glows white and starts to fade as the battery wears down. On the contrary, the Pulse 3 had a flap covering the 3.5mm headphone jack and the micro USB port. It also had 4 different LED indicators for the battery. 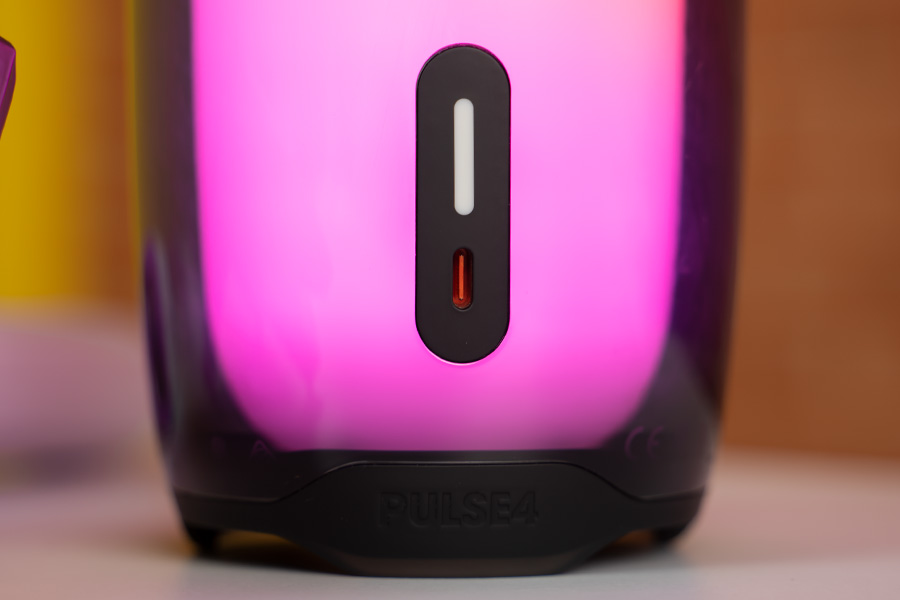 If all of this is sounding eerily similar, all these design changes (discounting the LED lightshow) is similar to what JBL did for the successor to its Flip 4 Bluetooth speaker. The new JBL Flip 5 also came without a flap & 3.5mm jack, had a single shade of LED indicator, and the new “PartyBoost” connectivity protocol.

Lack of a 3.5mm jack on the Pulse 4 means it’s now a Bluetooth-exclusive speaker. While that may sound like a bummer, it’s easy to understand why JBL would do this. The entire point of a portable speaker is that you could enjoy audio on the go without having to meddle with any wires and such. More importantly, Bluetooth already is the more convenient and practical method among the two, when it comes to playing audio from your phone which is the primary use-case for such a product. 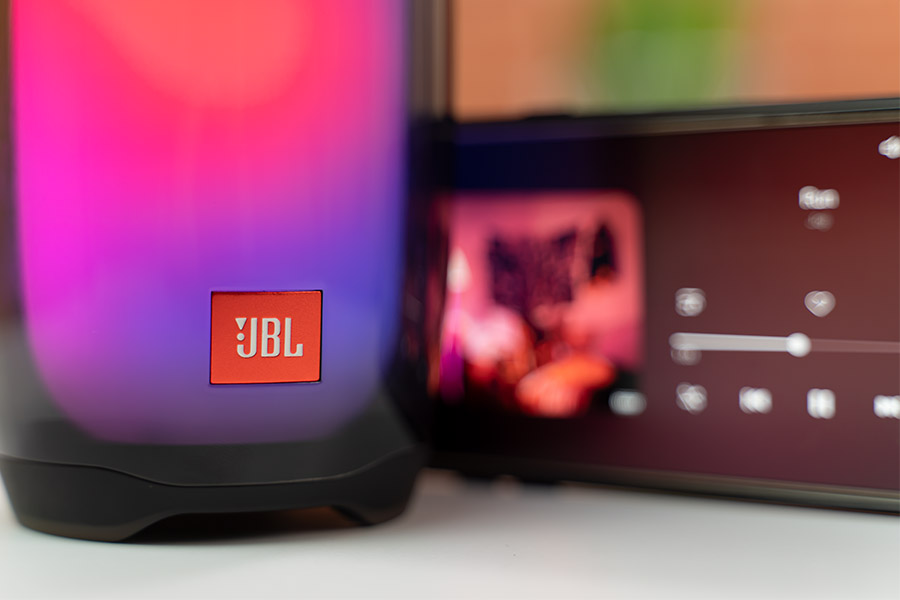 Furthermore, it is also IPX7 water and dustproof, meaning it will easily survive spills and can even be submerged in water, though there’s a 3feet/30minutes limit. And unlike Titanic, JBL Pulse 4 floats on water so you don’t need to worry about it sinking when taking it to pools and whatnots.

Audio performance on the JBL Pulse 4!

Now let’s get to what matters the most in a Bluetooth speaker; the sound quality. And let me tell you – the JBL Pulse 4 doesn’t disappoint. Apart from the visual changes from its predecessors, the company has tweaked the internals as well.

In the case of Pulse 3, it had three 40mm transducers underneath the bottom of half of the speaker and one passive radiator each sitting on the top and bottom. But here on the Pulse 4, there’s a single 57.15 mm upward-firing transducer on the top and a rubbery passive radiator on the bottom. Despite this, both speakers have the same single 20W audio driver and a 360º speaker array.

Pulse 4 has a strict way of how you ought to place it for the best sound.

The upward-firing transducer, as the name implies should be facing up while the passive radiator works as the base of the speaker. And yeah, there’s a distinguishable difference in audio quality when placing it upside down.

Besides that, when placed as you should, the sound quality is incredible on the JBL Pulse 4. It gets very loud and therefore is more than enough to rock an average-sized room, which is also because the soundwaves get to bounce off the walls. Therefore, Pulse 4 doesn’t sound as great outdoors though it’s not downright terrible.

Be careful before taking it outdoors!

And adding to the reasons for not taking the speaker outside is how susceptible to damage the outer layer of hard plastic is. I couldn’t bring myself to drop it (even accidentally), but I’m sure it will suffer from damage upon a fall.

Even when playing music on the max volume, there’s not a significant level of distortion in the audio which is great (though you can definitely notice some disruption in quality). You also get a nice level of bass and what impressed me the most was just how crisp and clear vocals sound on the Pulse 4. I tried out playing songs of different genres from acoustic, rock, lo-fi, rap, R&B, alternative, blues and even watched a couple of minutes of a few sitcoms & movies. And my god, this speaker delivers in every type of audio being played, though I have to give an upper hand for acoustics & vocals. Also, no delays. Nice! 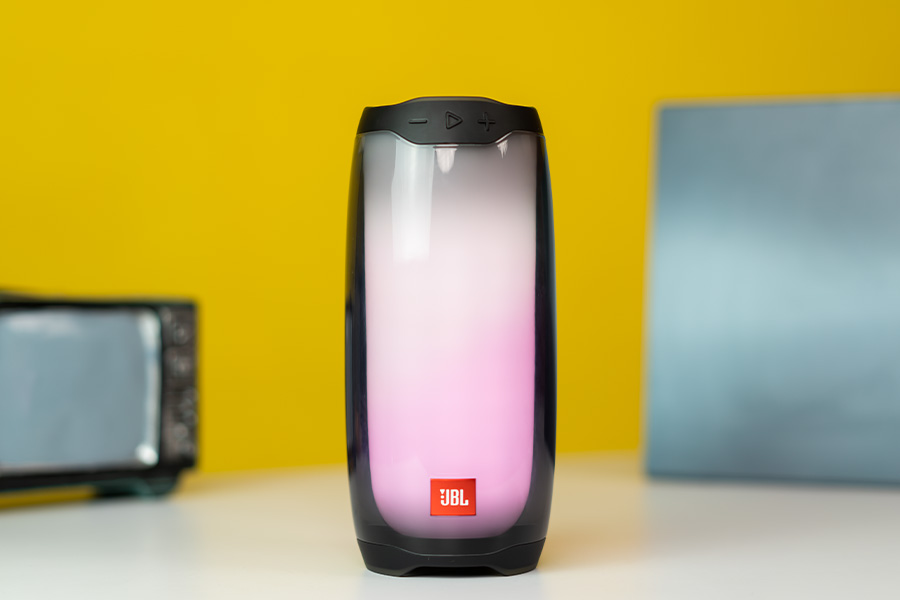 But not everything is bells & whistles on the JBL Pulse 4. I’ve already talked about how it lacks a 3.5mm headphone jack. Aside from that, it also skimps on a microphone, unlike its predecessor. Hence, you can’t trigger any digital voice assistants like Google Assistant or Siri or make voice calls through the speaker.

Adding to the cons is the new PartyBoost protocol. With this, you can connect up to 100 other JBL speakers with the PartyBoost, or pair two Pulse 4 for a dedicated left/right audio channel. Though it’s not a problem for a first-time owner of JBL speakers, it absolutely sucks for someone who already has Pulse 3 or other older JBL Bluetooth speakers. That’s because they used to come with the “Connect+” protocol, which has the exact same functionality as PartyBoost. Well, we’ve already berated JBL about this in our review of the Flip 5 so I won’t be talking more about it.

More disappointments follow, as the Pulse 4 still comes with the older Bluetooth 4.2 and basic A2DP & AVRCP audio codecs like on Pulse 3. At this point, I don’t understand why the company didn’t go with Bluetooth 5.0 or 5.1 even; increased range, higher bandwidth, I mean what’s stopping JBL? In our test, we got a stable connection with Pulse 4 in an office environment for about 8 or 8 and a half meters. That’s not “not” impressive, but still.

sounding awesome and looking cool while doing it.

And the “looking cool” part is definitely because of the lightshow. With its colorful LEDs, the Pulse 4 literally lights up your world, which glows differently depending upon the type of music being played. You can also customize the lightshow using the “JBL Connect” app. When adjusting the volume, you also get a live view of the sound level on the lightshow itself, which is awesome.

There are a bunch of presets embedded into the app, like spiritual, wave, campfire, equalizer, or even make your own style. Additionally, you can also adjust the brightness of the lightshow as preferred or use your phone’s camera to pick a color and reflect it on the speaker. Though the color range isn’t all that great, it gets pretty close to what you picked so I have no complaints about that. And I gotta say, the lightshow definitely adds to the overall listening experience.

Time to talk battery life. Pulse 4 has a bigger 7260mAh battery which charges via a Type-C cable and takes about 4 hours to go from 0 to 100%. JBL claims that it can last up to 12 hours, but besides sound level, the lightshow also impacts the net battery life. 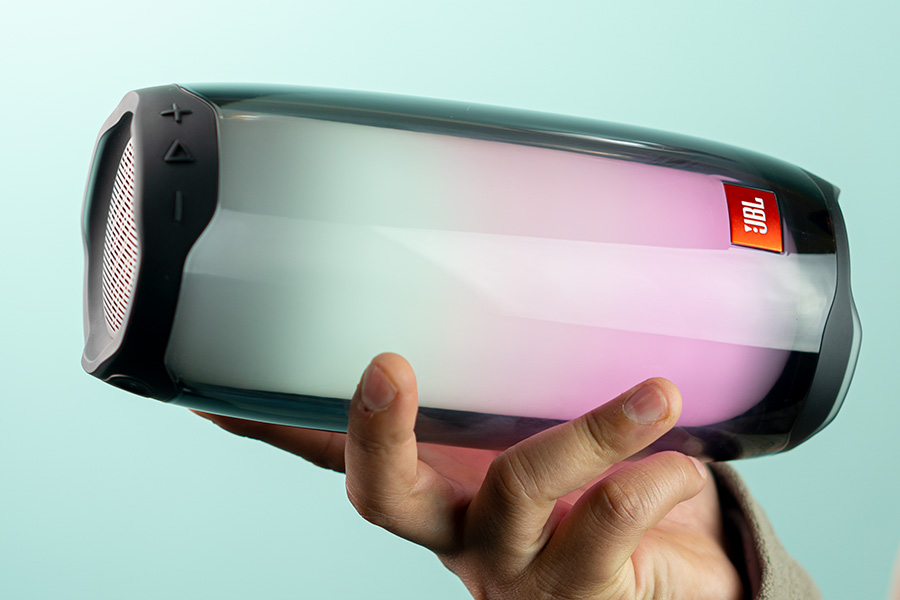 As a result, it’s hard to get the advertised duration of playback. In my time with it, I kept the brightness of the lightshow at its default setting and played music in about 70% volume and it lasted for about 8 hours which honestly, isn’t bad at all. So good job, JBL!

To sum it all up, the JBL Pulse 4 is an excellent Bluetooth speaker and its lightshow is more beautiful than ever. The sound quality is fantastic in almost every type of audio and you get great bass as well. The battery’s been improved as well, which is another positive thing about Pulse 4. However, speaking strictly in terms of audio quality, it offers a very minimal upgrade over the Pulse 3. So, if you already own that one, I don’t see a reason to upgrade it to this. Having said all that, for $250, the JBL Pulse 4 is a terrific Bluetooth speaker that’ll almost instantly deliver a unique experience to your eyes and ears.