We recently covered the news of a Japanese institute potentially resolving a big issue related to battery health, with is battery health loss in the long run. Meanwhile, a group of researchers in the US has created the “holy grail” of electric vehicle batteries, based on a BLT (Bacon, Lettuce, Tomato) sandwich design. They’ve used lithium metal in a battery rather than lithium-ion, as found in electric vehicles in the market.

A research team from Harvard’s John A. Paulson School of Engineering and Applied Science (SEAS) has introduced new lithium metal batteries. These batteries have immense potential for energy conservation but they struggle or fail to charge. But now, the BLT-inspired lithium metal battery solves the charging issue and another long-lasting issue of dendrites. Dendrites are small, rigid tree-like structures that can expand within a lithium battery and accelerate battery failure.

As mentioned earlier, this approach takes its inspiration from a BLT sandwich. On the bottom is a piece of bread that acts as a lithium metal anode, and just above it is lettuce which represents graphite coating. On top of graphite, there are two pieces of tomatoes (electrolyte 1, 2), and between them is a second electrolyte represented by bacon. Finally, it is covered with a slice of bread illustrating the cathode. 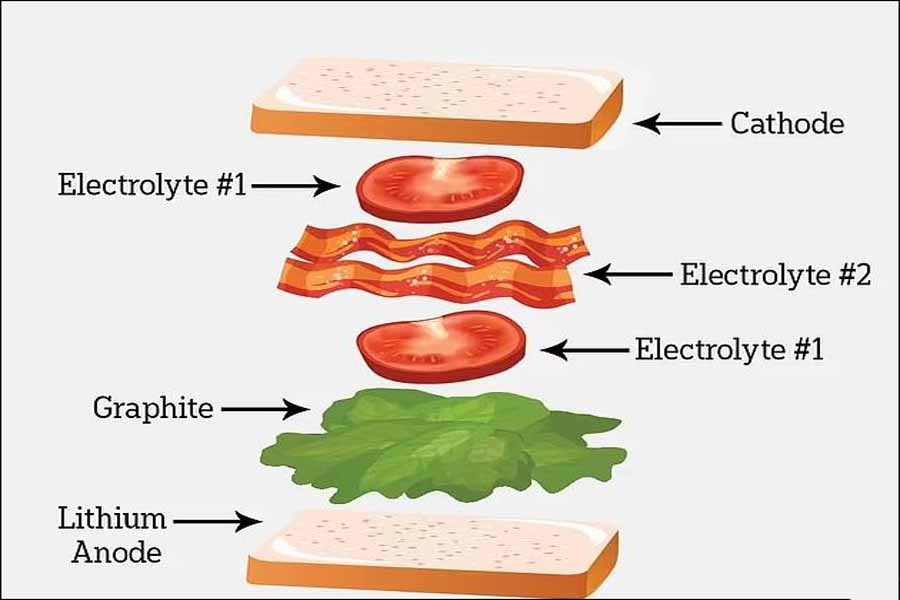 According to researchers, it can complete at least 10,000 charging cycles with the newly proposed configuration. Moreover, it can also increase the life of electric vehicles by 10 to 15 years. The researchers claim that there is no need to replace the battery during this time period. Furthermore, one can fully charge them in 10 to 20 minutes. Currently, the health of an EV’s battery steadily deteriorates over time, with a cumulative life of up to seven or eight years on average.

Anode, cathode, and electrolyte are the three primary elements of lithium-ion batteries. During charging, lithium ions move from the cathode to the anode. But when lithium metal acts as the anode, dendrites start growing on the surface. Ultimately, these structures expand, which in turn pierce the bond between anode and cathode, possibly facilitating the battery to catch fire.

To address this problem, the researchers created a multi-layer battery that has varying stability between anode and cathode. Its architecture avoids lithium dendrite penetration by controlling them. These rigid structures grow between the graphite layer and the first electrolyte but the growing process stops when they meet the second electrolyte. That is, bacon (electrolyte 2) makes a foil to prevent dendrites from penetrating the battery. Moreover, it’s a self-healing battery which means, it can plug the holes created by dendrites.