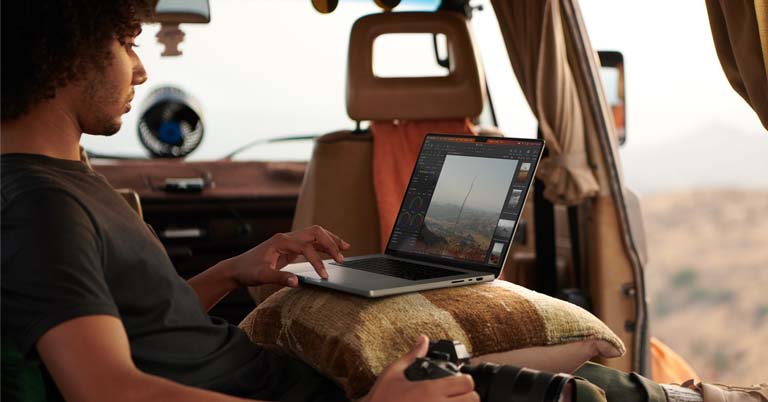 Apple has just announced the new MacBook Pros and Mac Mini powered by the all new M2 Pro and M2 Max processors. Thanks to the new chips, the-new MacBook Pro 14 and MacBook Pro 16 bring improvement in performance and battery endurance. In addition, they also bring updated connectivity options. In this article, we will discuss the MacBook Pro 16 (2023) in more detail, including the specs, features, expected price, and availability in Nepal.

The most significant upgrade on 2023’s MacBook Pro 16 is probably the inclusion of the new M2 Pro and M2 Max chips. These next-generation chips are the extension of the M2 chip. They are based on the same CPU architecture as the vanilla M2 but pack a higher number of CPU and GPU cores. For instance, the M2 Pro can have up to 12-core CPU and 19-core GPU. Likewise, it can be configured with up to 32GB of unified memory with double the bandwidth of the regular M2.

The M2 Max even builds on the M2 Pro with even better graphics processing and faster memory. It has the same 12-core CPU as the M2 Pro, but the GPU is reinforced with up to 38 cores. Moving on, it can be configured with up to 96GB of unified memory that boast a faster 400GB/s bandwidth. Apple says the new MacBook Pros can maintain performance whether they are plugged in or not. Of the two, the new MacBook Pro 16 (2023) has better battery endurance. Apple has rated the 100WHr Lithium Polymer battery for up to 22 hours of video playback, which is one more hour than last year. This makes the new 16” MacBook Pro the MacBook with the longest battery life. The M2 Pro variants ship with a 140W  USB-C power adapter and a USB-C to MagSafe cable for charging. 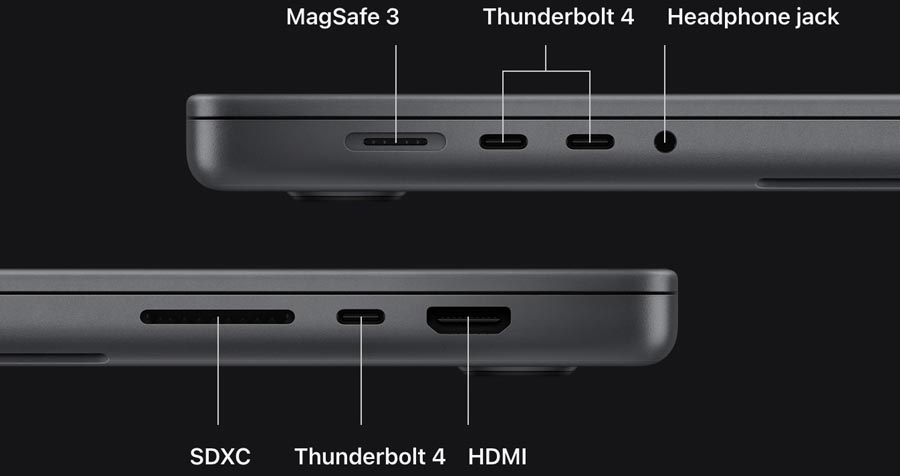 You can find the MagSafe 3 magnetic charging port to the right of the MacBook Pro 16. It is placed alongside two Thunderbolt 4 and a 3.5mm headphone jack. There is an additional Thunderbolt 4 port on the left side, along with an HDMI and an SDXC card slot. The HDMI port is of the new 2.1 standards and thus allows up to 8K at 60Hz and 4K at 240Hz. You can use the Thunderbolt 4 and HDMI ports on the MacBook Pro 16 (2023) to connect to up to four external displays at a time. Likewise, Apple has upgraded the wireless connectivity to make the MacBook Pro compatible with Wi-Fi 6E networks.

There is not much to talk about the design aspect of the new MacBook Pros. The new MacBook Pro 16 (2023) inherits the same form factor as its predecessor. Even the Liquid Retina XDR display has remained unchanged with 120Hz ProMotion and a notch for the 1080p FaceTime camera.

The audio setup is also the same, with Apple opting for the six-speaker system with tweeters and force-canceling woofers. There is even support for Dolby Atmos and Spatial Audio. You also get a Touch ID on the Magic Keyboard that you can use to unlock the MacBook Pro, sign in to apps and websites and make payments.