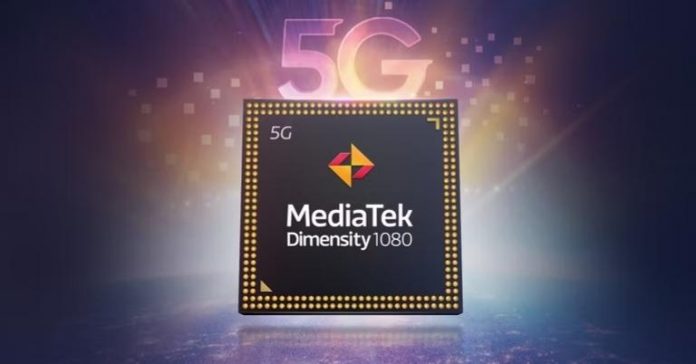 MediaTek has been dominating the budget and mid-range smartphone silicone landscape for a while now. Its Dimensity 920 SoC was seen on phones like the Realme 9 Pro Plus, Narzo 50 Pro, and Xiaomi 11i. Now, the company has unveiled its successor, the MediaTek Dimensity 1080 with improved performance, efficiency, and camera capabilities.

The GPU here is the same Mali-G68 MC4. Thus, we might not see significant improvements in terms of pure performance metrics. Likewise, the Dimensity 1080 does not have new gaming-specific features and still uses HyperEngine 3.0. That aside, it supports LPDDR5 memory and UFS 3.1 storage.

While the performance boost seems minimal, major changes come in the camera department. MediaTek Dimensity 1080 can now handle up to a single 200MP sensor, up from 108MP. Moreso, it can take hardware accelerated 4K HDR videos.

The chipset supports Full HD+ displays with refresh rates of up to 120Hz. Moreover, it uses the same AI Processing Unit (APU) as the 920. Here we see support for sub-6GHz 5G network, Wi-Fi 6, and Bluetooth 5.2 as well.

According to MediaTek, phones with Dimensity 1080 will be available in the market by the fourth quarter of 2022.