Home Xiaomi Xiaomi Nepal launches Mi Power Bank 2i as a part of its... Xiaomi announced its Secret 7 campaign via its official social media handles last month. Under the campaign, the company will be launching 7 new products, otherwise referred to as “7 surprises” in Nepal. The first two surprises were the Redmi 9 and Redmi 9A. For the third surprise, Xiaomi Nepal has launched two variants of the Mi Power Bank 2i. Let’s learn more about the Mi Power Bank 2i, along with its specs, features, official price, and availability in Nepal. 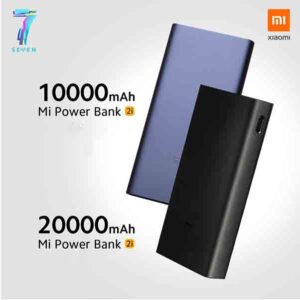 The Mi Power Bank 2i comes with a compact form factor. The 10,000mAh variant is enclosed inside a body that measures 147 x 71.2 x 14.2mm. On the other hand, the 20000mAh variant is slightly thicker at 149.5 x 69.6 x 23.9mm. For greater structural strength and damage against environmental factors, Xiaomi has used aluminum alloy for the frame. Similarly, Xiaomi has also used PC and ABS for the construction.

The metallic build has been finished off with an anodized layer on top for added resistance against sweat, corrosion, and wears. The company claims that the 180-degree ergonomics design will provide a secure hand grip to the users.

The Mi Power Bank 2i features dual USB ports for output. It supports 18W fast charging but only when a single device is connected. When it is charging two devices simultaneously, the output is limited to 5.14V / 2.4A on the 10000mAh variant and 5.1V / 3.6A on the 20000mAh variant.

The Mi Power Bank 2i features USB smart-control chips and charging/discharging chips from Texas Instruments. Thus, it offers nine layers of protection. The internal chip is protected against short circuit, input, and output overvoltage, overcharging, and over-discharging. Similarly, the chips ensure the battery is operating within the operatable temperature condition. The power bank can stop the charging process if it detects an incorrectly inserted charger.

In case the power bank becomes unstable, users can reset the device using the power button. The power bank also features a Positive Temperature Coefficients circuit, which acts as a fuse in case temperature and current exceed the maximum limit.

Mi Power Bank 2i Price in Nepal and Availability