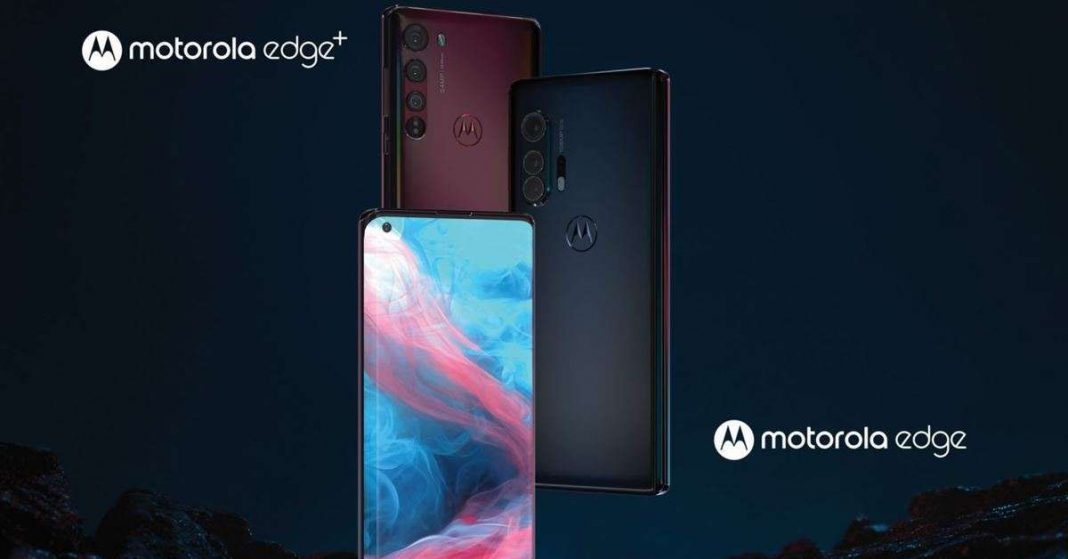 The flagship smartphone market is absolutely dominated by Apple and Samsung. Despite some decent competition from other companies like Huawei, Xiaomi, OPPO, etc. the two OEMs above make up the majority of the high-end market. Motorola, on the other hand, had taken a leave of absence from the expensive smartphone business for quite a while. And now, the company’s giving another shot at it with the new Edge+. It comes bearing all the flagship features you’d expect in a 2020 phone, and a “trendier” curved display (hence the name). Alongside the flagship Edge+, Motorola also unveiled a similar yet cheaper “Edge” with mid-range specs and such. Let’s take a dig at the specs, price, and more of the Motorola Edge & Edge+.

Besides the internal specs themselves, the new Motorola Edge+ features a stunningly trendy edged display, and a small notched cut-out for the front camera. It also supports 15W wireless charging but disappointingly, isn’t nearly on par what other manufacturers are offering. For instance, OPPO’s new Ace 2 boasts 40W wireless charging. Interestingly, Motorola Edge+ comes with a water repellent design though the company didn’t bother to get an official IP rating. That may be a cost-saving tactic but I strongly believe Motorola should’ve gone with something official. Now let’s talk about the display. While it’s definitely exciting for the company, we all know and have seen the edged display in other devices. Motorola is calling it “Endless Edge” and the panel itself is a 6.7-inches FHD+ OLED with a 90Hz refresh rate. Let’s quickly compare with some other non-Apple flagship phones of late. Samsung’s Galaxy S20 series supports smoother 120Hz in FHD resolution. More impressively, the new OnePlus 8 Pro & OPPO Find X2 Pro comes with 120Hz in QHD resolution out-of-the-box.

But don’t frown your face just yet. Motorola says the decision against a superior resolution was in favor of better power endurance. The Edge+ already has a large battery and this is only going to add to the durability. Asides from looking like a visual treat, the company has added some functionality to the edge itself. You can slide down the edge to open notifications, launch app, or configure shortcuts of your own. While Samsung itself is backing down from excessively curved displays, it’s kinda interesting to see how companies like Motorola & OnePlus are finally jumping in on the bandwagon.

Moving to the performance, the phone is powered by the latest and greatest Qualcomm Snapdragon 865. Though the chipset doesn’t have an integrated 5G modem, the dedicated X55 5G modem technically means it’s an inherently 5G SoC. With the industry pacing towards the next-gen cellular connectivity, one of the main selling points of Motorola Edge+ is 5G too.

The phone supports both sub-6GHz and the faster mmWave spectrum of 5G connectivity. However, only the US-version of the phone bolsters up mmWave 5G. Because of this, the availability of the device has remained limited (more on that later).

In terms of memory, there’s only one configuration of Edge+ with 12GB of LPDDR5 RAM and 256GB of UFS 3.0 storage. This decision seems a little weird because Motorola could’ve easily played around with memory options and put out cheaper variations of its first flagship smartphone in years. What’s worse? There is no SD card support either.

Making its debut on a Motorola device is a 108MP sensor. A three-figure camera lens is all the rage these days thanks to Samsung’s S20 Ultra or Xiaomi’s Mi 10 Pro. Unfortunately, it’s not a telephoto lens and is the primary wide-angle sensor with 2 x 2-pixel binning technology. As a result, you can either take 27MP binned photos or go for 108MP shots themselves. 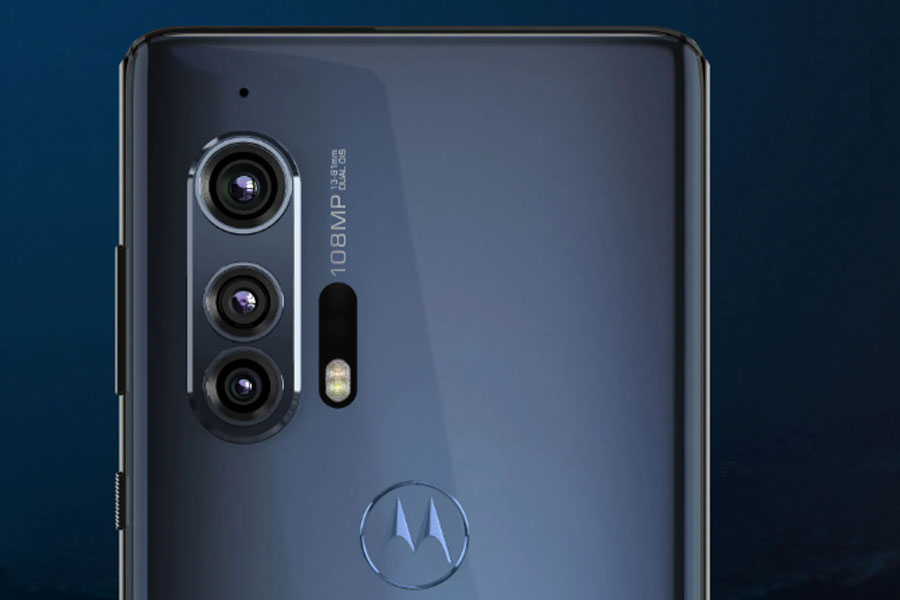 There’s also a 16MP ultra-wide angle lens with a 117º field of view (FOV), which also doubles as a macro sensor. And finally, you have an 8MP telephoto lens with a 3x high-res optical zoom. Here, both the primary and the telephoto lens support Optical Image Stabilization (OIS). Finally, there’s a 3D ToF depth sensor as well. You can shoot up to 6K videos at 30fps, which is a little more practical than 8K in terms of the end-result itself.

Getting to the front camera, you have a 25MP selfie shooter sitting inside a small punch-hole cutout on the top left corner of the display. Like the main sensor at the back, the selfie camera also comes with quad-pixel technology.

Another, kind of a big feature on the Edge+ is its speaker. The phone has dual stereo speakers tuned by Waves and Motorola is making big promises on this. According to the company, these are the loudest speaker ever put on a smartphone. Oh, there’s a 3.5mm headphone jack too. So much for “lack of space” I guess.

Alongside the flagship Edge+, Motorola also announced a cheaper mid-range alternative called Edge. But how other manufacturers go with a smaller form-factor in the base variant of a lineup of smartphones, Motorola has kept it the same and simple. That means the regular Edge has the same 6.7-inches curved OLED panel with a 90Hz refresh rate, though it substitutes HDR10+ support for regular HDR10. 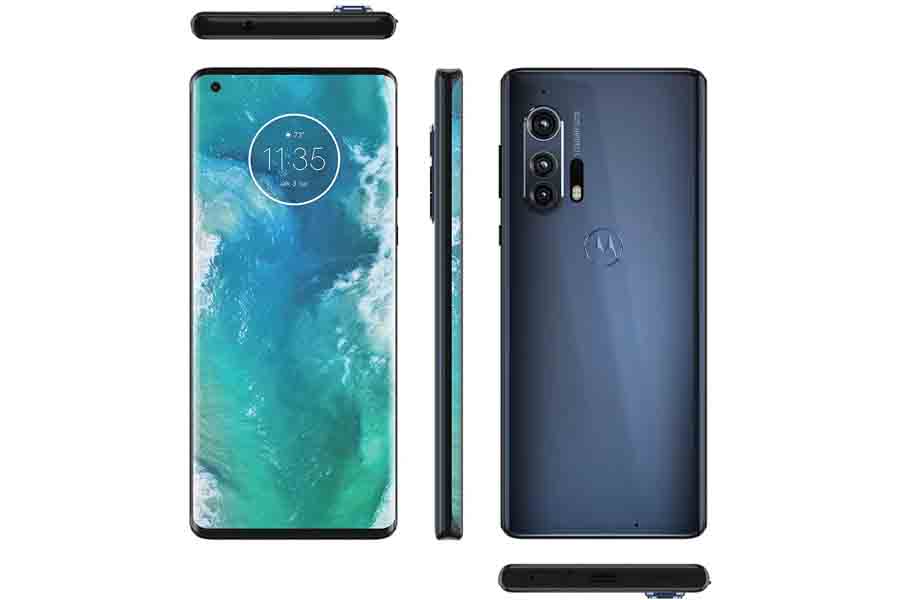 Another major difference as you’d expect lies on the chipset selection. The Motorola Edge has the Snapdragon 765G. It is based on the current industry standard 7nm process as well and has an integrated 5G modem. Unlike Edge+, this one only supports the sub-6GHz spectrum of 5G and not the faster mmWave 5G. There are two memory configurations of Motorola Edge: either 4 or 6GB of RAM with 128GB of UFS 2.1 storage.

Moreover, the standard Edge substitutes the 108MP primary lens with a 64MP sensor instead. Besides this, it shares the same telephoto (though with a reduced 2X zoom), ultra-wide-angle, and ToF depth sensor. Finally, there’s a smaller 4500mAh battery without support for wireless charging, unlike its expensive brother.