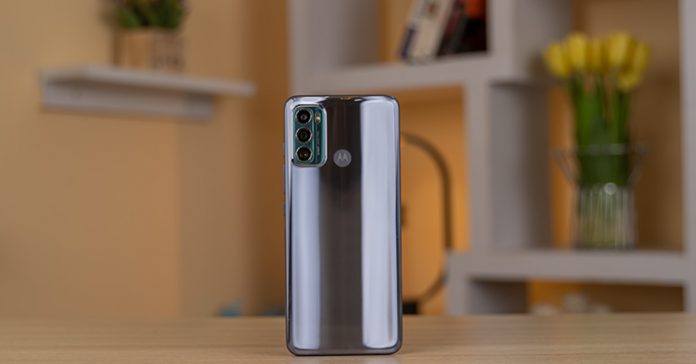 Xiaomi and Realme have turned the South Asian market into a battleground for mid-range smartphones with their aggressive pricing. Motorola has also joined the fray launching some good mid-range devices in 2021, one of which is the Moto G40 Fusion. It’s also the most affordable smartphone with a Snapdragon 732G processor, at least for now. And in this review, I’ll share my thoughts on the Motorola Moto G40 Fusion and tell you all you need to know about it. So, let’s get started.

Ok, the first thing you will notice after picking up this phone is its bulky form factor. It weighs 225 grams and measures 9.5mm, so this is definitely not the lightest and slimmest device in this price range. For this review, I put the Motorola Moto G40 Fusion up against the Realme 8 and the latter is something you can wrap your hand around without experiencing any discomfort.

Anyway, it took me a couple of days to get used to this design. But after then, it’s been pretty comfortable in my hands. Additionally, there are minimal curves around the edges of the rear panel which results in a strong grip while holding the handset.

Now, after flipping the phone, there’s nothing to get hyped about Moto G40’s design. If you think the glossy design is passé, then you may be disheartened with what Motorola’s offering here, as it has a two-tone glossy back. As a result, you’re certain to encounter fingerprints or smudge marks quite easily.

Similarly, there’s a rectangular camera module with a nominal bump, which means the phone wobbles on a level surface. So, to minimize the wobble and to protect it from fingerprints, Motorola ships a transparent protective case inside the box. But, the case further adds to the phone’s thickness.

Not the best in design

Furthermore, the company provides two color options to choose from – Dynamic Grey and Frosted Champagne. As aforementioned, the phone has a 2-tone layout and the Dynamic Grey variant which I have with me brings a greenish accent in the rear camera module. It appears to be a one-of-a-kind approach at first look. But in the long run, I didn’t quite find it blend in with the phone’s glossy design at the back—or maybe it’s the other way around.

For biometrics, there’s a rear-mounted fingerprint scanner just aside from the camera module, which has the batwing-esque Motorola logo. Although the sensor takes a while to read the fingerprint, its accuracy is pretty good. However, as other brands have shifted to a side-mounted sensor nowadays, I wish Motorola joined the fray as well.

Moving on, Moto G40 Fusion includes power, volume, and a dedicated Google Assistant button on the right side. One thing I’d want to point out is that if the assistant button had been positioned independently on the left, it would have made things a lot easier to deal with. That’s because I frequently pressed the assistant button mistaking it for the volume up.

However, to differentiate the assistant button from others, it has a slight curvature design, but that’s unnoticeable and doesn’t make any significant difference. Besides, there’s a 3.5mm audio jack and a microphone on the top while the bottom frame is home to a USB Type-C port, speaker grill, and the primary microphone.

Over on the left, you’ll find a Hybrid SIM tray, which means it enjoys microSD card support too. Not to forget, Moto G40 Fusion features a water-repellant design, which means it should be able to withstand minor water splashes.

Heading to the display, the Moto G40 Fusion has a 6.8-inch FHD+ IPS LCD panel. On the contrary, similarly-priced phones like the Realme 8 boasts a 6.4-inch Super AMOLED panel. Motorola has traded off an AMOLED screen for a 120Hz refresh rate, and a relatively larger display. The latter makes it a fairly suitable device for those whose priority is content consumption.

Enhancing your video-watching experience is a near-cinematic 20.5:9 aspect ratio, which is something I really appreciate at this price. The display here has good contrast and sharpness and the color-tuning under the saturated preset was perfect for me. Likewise, its outdoor visibility is respectable as well.

Moreover, with a 120Hz panel on board, opening up apps and multitasking between them is quite smooth. I didn’t notice any lag during constant scrolling through Google News or Facebook feeds either. Also, you can switch the refresh rate to 60Hz or set it to Auto if you don’t want your battery to be depleted quickly.

Like I mentioned at the beginning of this review, the Motorola Moto G40 Fusion is the cheapest phone powered by Qualcomm’s Snapdragon 732G. Here, I have the 6/128GB memory variant. However, the main selling point or the trump card of any Motorola phone is its near-stock My UX Android interface.

Stock Android means there’s no bloatware, unwanted apps, or random ads. Plus, the company has offered some great customizations like you can twist the device to open up the camera or chop it to turn on the flashlight. In addition, Motorola has also secured the device with ThinkShield protection which protects it from phishing and network attacks. Pretty safe, right?

Yet, this UI does have some issues. Like, after opening the chat in Snap, I literally couldn’t go back easily and I have to repeat the gesture until I am finally out of it. Also, the camera app crashes automatically if it remains open for 2 minutes or so.

Moving on, if pure performance is what you’re after, then this is the best option to consider in this price bracket. Plus, the phone has a game mode called Gametime which lets you block calls or notifications during your gameplay. Also, there’s this unique feature called “Acoustic Light” which puts a light glow on the four sides of the screen.

Talking about real-time gameplay, PUBG Mobile’s settings max out at HD graphics and High framerate. However, to enjoy the lag-free gameplay I switched back to Smooth graphics and Ultra frame rate, and the match went on smoothly. But, I felt a slight jitteriness after half an hour of gameplay.

A lighter game like Call of Duty renders a lag-free experience in Very High graphics and frame rates. While the smartphone doesn’t get too hot at the back because of its thickness I guess, but I could definitely feel the warmness around the camera module. And, while checking the CPU temperature, it kept fluctuating between 40-43ºC, which isn’t that much of an issue I guess.

That is, the latter gets a 108MP primary sensor at the back and a 32MP selfie camera on the front, while other camera configurations are pretty similar.

I compared the camera of G40 Fusion with Realme 8 and in normal mode, Motorola processes its images to emphasize more on black levels, making them look a bit dark. On the contrary, photos from Reame 8 are brighter and have a better dynamic range. Still, Motorola takes the lead here with good exposure maintenance.

On the surface, both devices capture photos with the same level of sharpness. But when zooming in, things tend to look softer on the Moto G40 Fusion. Likewise, as with most Realme devices, greens come off with excessive vibrance—and lose the natural color-tone.

While both devices get an 8MP wide-angle lens, photos from the Moto G40 Fusion are superiors in terms of details.

Realme makes its photos pop up in terms of vibrancy. Yet, like the normal mode, the dynamic range is better here.

As for the portraits, as you can see from these samples, Realme 8 maintains white balance better while Moto outputs its image with a bit of haziness. Furthermore, the skin tone looks pinkish and oversaturated from the Realme 8, while Motorola adds smoothness to the subject. Edge detection, on the other hand, is superior in Moto G40 Fusion.

Now, let’s head to the macro shots. Here, the Moto G40 Fusion captures close-up shots with its ultra-wide lens as it lacks a dedicated macro lens. So, the Realme gets an advantage, at least on paper, with its 2MP macro sensor.

But, the pictures look more vibrant and natural on the G40 Fusion and are well detailed too.

The one area where Realme 8 performs significantly better is in the nighttime shots. As evident from these photos, its normal nighttime shots retain more details and processes better HDR.

With the Night mode turned on, from details to dynamic range to vibrancy, every aspect looks good on Realme 8. Additionally, the lens flare is more pronounced in the G40 Fusion, while in the Realme 8’s image, the flare isn’t that noticeable.

Moving on to the selfies, the details from both the phones turn out to be similar. However, the ones from the Moto G40 Fusion look smooth, have a slight pinkish tinge, and the colors look a bit muted as well. Instead, Realme’s image looks punchy and has better dynamic range and exposure.

The same is true with portrait selfies. Motorola loses the inning as the pictures lack dynamic range, whereas the Realme 8 captures images with better edge detection and details.

On the videography side, both phones can record up to 4K 30fps videos. But, Motorola has a significant advantage here, as it gets the stabilization option even in the 4K/30fps mode. So, as you can guess, videos look a lot more stable from the G40 Fusion. Similarly, FHD videos at 30fps repeat the same story. Although both devices get a stabilization option in this mode, the output is steadier on the Moto G40 Fusion.

However, when shooting FHD videos at 60fps, the G40 Fusion struggles to focus on the subject after few seconds of recording, while there was no such issue with the Realme 8. Over on the selfie videos, the latter captures videos with a better skin tone, even though the stabilization is once again better on Moto G40.

There’s no joke when it comes to the battery life of Moto G40 Fusion. The device packs a big 6000mAh battery, and on my normal usage, its battery life extended to well beyond a day and a half. In fact, if you don’t click that power button quite often, you could quite possibly end up with up to 2 days of battery life. 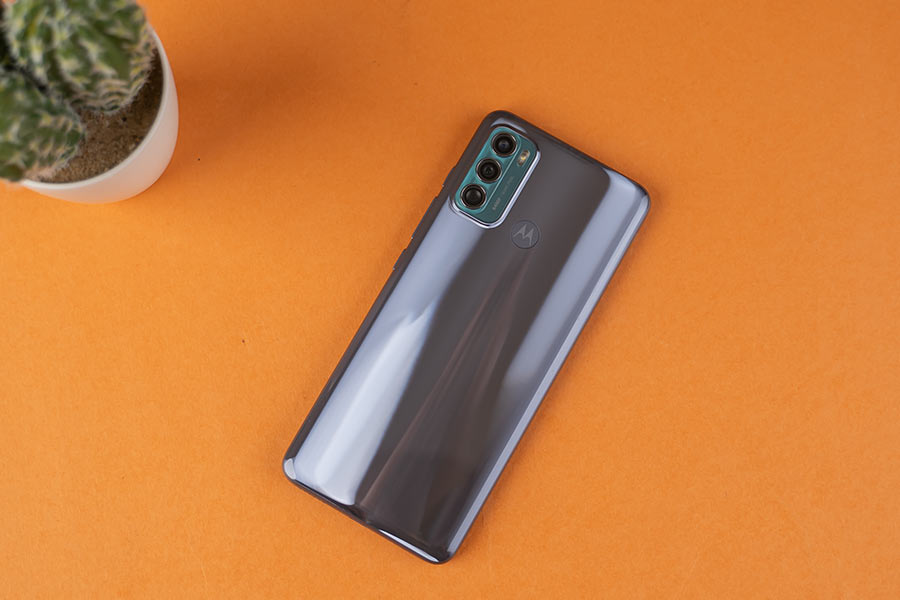 However, with my practical usages, like 1-2 hours of gaming, 3-4 hours of content consumption, and other regular tasks, the phone survived till the end of the day with 20% battery remaining.

Despite such amazing battery life, one disappointing factor is the charging speed. The phone takes nearly 2 hours and 30 minutes to fully charge with its 20W adapter. So, make sure to go to nap before putting it on charge. Jokes aside, the interesting thing here is its big brother gets the same 20W adapter. So, I guess there’s no room for complaining.

Getting to the audio, Moto G40 Fusion comes with a single bottom-firing speaker. Although it’s a mono speaker setup, it’s quite loud, unless you’re downgrading from a stereo speaker setup. Similarly, the earpiece sound quality isn’t that great here. It works absolutely well in a fairly quiet area, such as an indoor room. But when I’m outdoors, I had to activate the speaker. So, call quality felt a little disappointing to me.

Summing up this review, if you’re specifically targeting a device under the INR 15,000 price range, the Motorola Moto G40 Fusion features a shortcoming in one area or another. With this phone, you get a bulky and unattractive design. However, its clean stock software is something Android users would love unless they want some extravagant skins on top of it like MIUI or ColorOS. Furthermore, you also get a long-lasting battery, a powerful processor, and a few other features that make it a worthy option to choose from. But, if you care about a good AMOLED panel, rather than a stock-ish Android experience, there are a bunch of other good options to spend your cash on.