Before we get into our Motorola Moto G52 review, let’s quickly recap previous Moto phones, particularly the G-series. Launched in 2013, the very first Moto G smartphone almost single-handedly disrupted the industry by proving that a lot can be offered at just a fraction of the price of what the mainstream phones were going for at the time.

But as the number of devices in this lineup began to grow, and Motorola transitioned from a Google-owned company to Lenovo, the Moto G series became a generic mishmash of smartphones rather than the streamlined unit it was in the early days.

Plus, given how well Xiaomi, Realme, and other Chinese brands have been performing lately, that G series charm has kind of been… lost somewhere. But looking at all the launches in this lineup in 2022, I feel like Motorola has finally made a great comeback! And one of the best examples of this is the Moto G52, which I’ve been using for a little over two weeks now.

It retails at a starting price of INR 14,499 in India, which puts it in the same league as the quite-successful Redmi Note 11. Besides price, these phones bring a similar set of specs as well. So, is the Moto G52 worth considering over the Note 11 and other phones in this price range? Let’s find out in our review.

Something that stands out right away about the Motorola G52 is its design. I know… I know it doesn’t look all that different from say, the Moto G31 or G71, but this Porcelain White variant that I have with me is what gives it a unique finish. Plus, with the metal-like polish on the camera module and frames, it looks nothing but stunning!

Now, don’t get confused, it’s still a plastic back. But Motorola has used what it calls a “PMMA Finish” to achieve this premium visual aesthetic. PMMA is a lighter, shatter-resistant alternative to glass and I can certainly see how it impacts the phone.

Here, the G52 is nearly 40 grams lighter than its predecessor. And the good thing is that it still packs a 5000mAh battery inside. And despite being a lightweight phone, it’s got the right amount of heft. Not to forget, the slightly curved panel at the back alongside the flat frames ensures a comfortable grip on the hands as well.

On top of this, Motorola has also made sure that the front of the device looks equally premium. Unlike most smartphones in this price range, the Moto G52 has a very narrow chin which kinda mimics the uniform approach to bezels on high-end devices. So, this has left quite an impression on me from the very first day I started using the phone. Moreover, this almost bezel-less design perfectly complements the OLED display of the device. But what’s interesting here is that Motorola has offered a pOLED panel on the G52, just like on the more expensive Moto Edge 30 Pro.

Now, in case you’re unaware, pOLED—or Plastic OLED—is a flexible, thinner, and more shockproof alternative to regular OLED panels. Besides everything else, it allows a device to retain a slimmer form factor—all the while retaining every perk of a typical AMOLED screen.

As a result, this display produces punchy colors with incredible contrast! So I’m sure you’ll enjoy watching movies and series on this screen. Speaking of which, the Moto G52 has also secured Widevine L1 certification and its brightness level is sufficient for both indoors and outdoors.

What’s more? It also comes with a set of dual speakers that supports Dolby Atmos audio. I wouldn’t say its sound quality is something cut above, but the vocals sound pretty clear here and it has a decent bit of bass as well. With all this, the Moto G52 translates into a capable multimedia consumption device.

Likewise, I’ve faced no issues regarding call quality on this phone and its proximity sensor works fairly well too. But the one area where most manufacturers haven’t put much effort into these sub-20K smartphones is haptics, and the Moto G52 is no exception. Its vibration feedback feels very loose, because of which I even missed a couple of calls despite having the phone in my pockets. So, this is the aspect where Motorola could’ve certainly done a better job by offering a slightly better vibration motor.

Anyway, all of this is driven by Qualcomm’s Snapdragon 680 chip. Built on a 6nm architecture, this processor earns praise in terms of energy efficiency and that’s evident on this phone too. That means, the Moto G52 can easily deliver 8-9 hours of screen-on-time! And like the Moto G71 that I reviewed a while back, I’m really impressed with its standby time as well. Similarly, charging the phone from 0 to 100% takes about 1 hour with the included 33W charger.

Aside from being power efficient, the Snapdragon 680 fares well for your day-to-day tasks as well. It can easily handle your light multitasking needs, and scrolling through the interface feels fairly smooth too—thanks to the 90Hz refresh rate onboard.

However, this is not that powerful of a chipset, especially in the gaming arena. For instance, PUBG Mobile caps out at just Balanced graphics and Medium frame rate here. And even in this setting, you will notice some micro stutters and frame drops every once in a while. So, for the best possible experience, I would recommend dialing it down to Smooth graphics and the High frame rate. 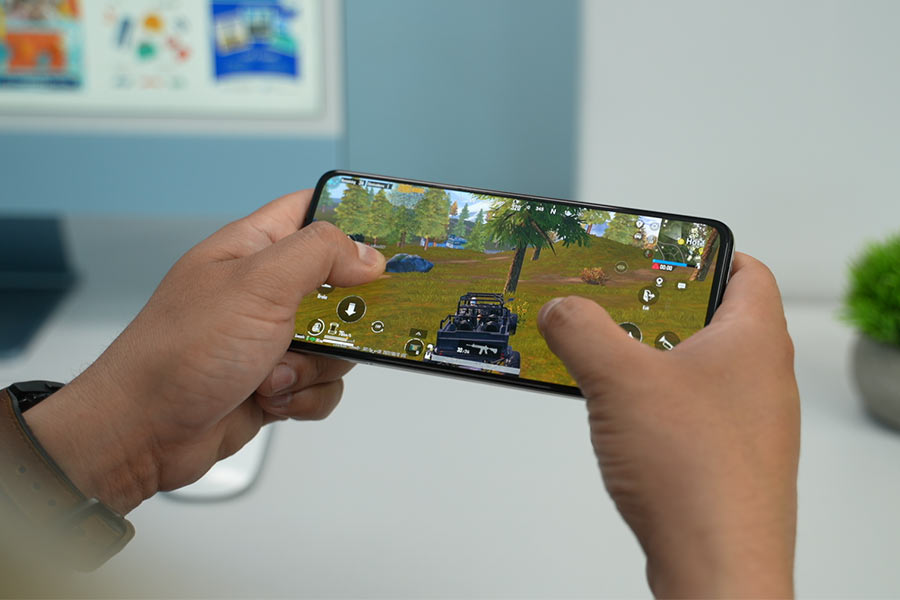 Diablo Immortal, which is a recent drop on the Google Play Store, yields fairly good results at Medium graphics, although the maximum you can go here is just 30fps. We also tried the new Apex Legends on this phone and it renders stable gameplay with Smooth graphics and Normal frame rate. But jumping to other higher settings results in noticeable lags and stutters.

So, if gaming is a top priority, you’d be better off by extending your budget a little for the Realme 9 5G Speed Edition instead, which offers an unrivaled gaming experience under the 20K price bracket.

Regardless, the software is where Moto G52 scores a big win against its competition—especially against other Chinese OEMs. First off, it boots on the latest Android 12 with Motorola’s My UX on top, which is already something given how most brands are still shipping their budget and mid-range handsets with Android 11. Additionally, the company has also promised a year of software and 3 years of security patches for the G52. Now, as you’d expect, this version of the My UX interface offers a Pixel phone-like experience. The default Android skin has gotten so refreshing and so feature-rich with Android 12, that its customization options are on par with—if not better—than most custom ROMs out there.

Aside from stock UI, Motorola phones are also known for their no-nonsense bloatware experience. While the G52 is a fairly clean phone, I’m surprised—and a bit disappointed—to find third-party apps like Josh and Dailyhunt pre-loaded on the device.

Yeah, they can be uninstalled with a few taps but this is the first time we’ve seen bloatware on a Motorola handset. And we hope this isn’t something the brand is planning to continue with its future releases since a clean user experience is something Motorola has always been associated with.

Let’s talk about the cameras now. Here, the Moto G52’s camera array is pretty much the same as you’d find on most budget phones right now.

And after shooting lots of photos from this guy, we found that its normal images are slightly on the cooler side. And unlike how Xiaomi and Realme phones tend to favor oversaturated photos, the colors look fairly natural here.

But it prefers slightly contrast-heavy processing, which means the images can’t retain much shadow details.

This is also true for the ultrawide shots, however, the overall detail from the 8MP sensor is expectedly little this time around.

Moving on, although the portrait images don’t really retain a natural skin tone, I’d say it has a balanced color science overall.

But as you can see, it tends to blow the background when shooting outdoors or against the light. So, HDR processing could’ve certainly been a lot better here.

Yet, selfies come out with decent background exposure. It’s just that the skin tone isn’t that consistent all of the time.

During low light, the Night Mode shots do a good job of controlling the exposure and retaining details, especially in a rather dark environment.

In a somewhat well-lit area though, there isn’t much of a difference between the regular nighttime and Night Mode photos.

Overall, the Moto G52 can capture decent photos for the price, although there’s still a lot of room for improvement, and that’s especially true in the videos as it can only record up to 1080p 30fps resolution from both the front and back camera. And, yes the stabilization isn’t that great here and the videos come off a bit contrasty too. Turning on stabilization does deliver fairly steadier results, but there is still some jerkiness every now and again.

Wrapping up this review, the Moto G52 is an excellent phone for the price—no doubt. It ticks almost all the boxes for a great all-around smartphone experience, be it in terms of design, display, software, or battery. 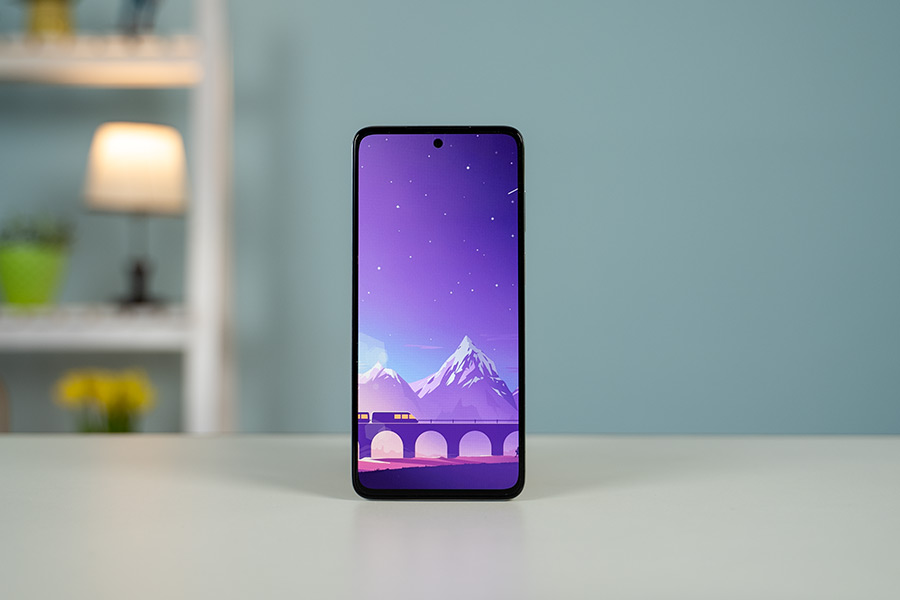 Granted that the cameras could’ve been a bit better here, but most phones in this price range have a strictly average camera, so maybe we should also limit our camera expectations from a budget phone, to begin with. Take its prime rival, the Redmi Note 11, for example. So, looking past this, the Moto G52 is an easy recommendation if you want an all-rounder phone for under 15,000 Indian rupees.