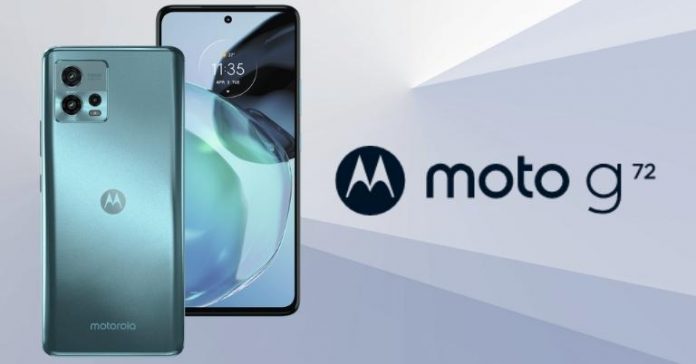 After several teasers, Motorola has finally launched the G72, its latest budget offering, in India. The phone appears to be very appealing, with key features such as a high-res camera, 120Hz OLED screen, and a large battery. Here, we will go through the specs, features, expected price, and availability of the Motorola Moto G72 in Nepal.

Starting off with the looks, the Moto G72 shares a design language similar to that of the more premium Edge 30 lineup. Available in Meteorite Grey and Polar Blue color options, the handset is IP52-rated and weighs around 166 grams. The 10-bit pOLED display on the Motorola Moto G72 measures 6.55-inch diagonally, whilst offering FHD+ resolution and 120Hz refresh rate. Furthermore, it has a 402PPI pixel density and at an aspect ratio of 20:9, covers 86.5% of the phone’s front.

Under the hood, the Moto G72 houses a MediaTek Helio G99 chipset. The chipset has been paired with 6GB of LPDDR4X RAM and 128GB storage. Moto G72 boots on Android 12-based My UX skin out of the box. Motorola promises three years of security updates and one Android update.

The Motorola Moto G72 has a triple-camera setup on its back. The main camera is a 108MP sensor whereas the other two are an 8MP ultrawide and a 2MP macro shooter. Turning the phone around, you get a 16MP snapper for video calls and selfies.

Moving on, the phone houses a 5,000mAh battery with support for 33W fast wired charging via USB Type-C. For audio, it has dual stereo speakers with Dolby Atmos and a 3.5mm headphone jack.

The phone has dual-SIM 4G, dual-band Wi-Fi, Bluetooth 5.1, GPS, OTG, and NFC for connectivity. Likewise, security is handled by an in-display fingerprint scanner.