Honestly, we’re running out of adjectives to define OnePlus’ end-of-the-year upgrades of its phones. “Tiny”, “Minute”, “Small” – we’ve used them all when describing the ‘T’ iterations of OnePlus devices. This year too, the company released the 7T and 7T Pro models alongside the coveted 7T Pro McLaren Edition last week. While they’re traditionally not meant to be the company’s next-gen smartphones with a ton of upgrades, there are some things to be excited here. Let’s take a closer look at what these devices are packing along with its price in Nepal.

The OnePlus 7T Pro shares a lot of similarities with the OnePlus 7 Pro. From the form-factor to the display, they’re undifferentiable. What OnePlus has done here akin to its previous generation of ‘T’ iterations, is simply implement their newest engineering feat onto a smartphone. Despite the similar setup, the 7T Pro is now capable of 3X Optical Zoom to the 2.2X Optical Zoom of the 7 Pro. Other notable camera upgrades in the 7T Pro includes the introduction of Macro mode and Hybrid Image Stabilization for videos. However, since these are not entirely hardware dependent, it’s fair to assume that they will eventually make their way to the 7 Pro.

OnePlus 7T Pro is powered by an updated Snapdragon 855+ (7nm) chipset which flaunts a nominal 4.2% CPU boost and a 15% GPU boost. The fast phone got even faster, though not by a tremendous margin mind you. Also, the phone runs on the latest Android 10 with Oxygen OS 10.0 out-of-the-box.

Unlike the 7 Pro with multiple memory options, the 7T Pro comes with a single 8/256GB variant. The battery side sees a small upgrade, with the 7T Pro housing a 2.125% bigger 4085 mAh battery to its predecessor. However, you get up to 23% faster charging with the new WarpCharge 30T so there’s a silver lining there. 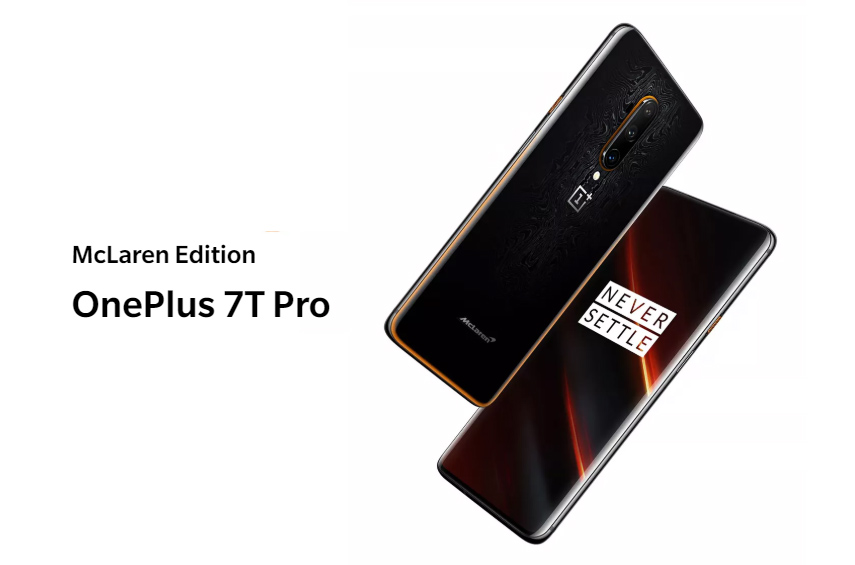 There’s the traditional McLaren papaya-orange accent around the phone. From the camera layout on the back to the custom app icons, the phone screams McLaren. Additionally, the curved display on the device also has a papaya-orange glow for notifications.

Juxtaposed to the likenesses between the 7T Pro and 7 Pro, the McLaren edition isn’t all that different from the 7T Pro either. Apart from the design, the only other enhancement here is the 12GB of RAM.

The official price of Oneplus 7T Pro in Nepal is Rs. 92,000 for the 8GB/256GB variant. It is available in Nepal from different retail outlets all over Nepal. You can also purchase it from online shops like Oliz Store.