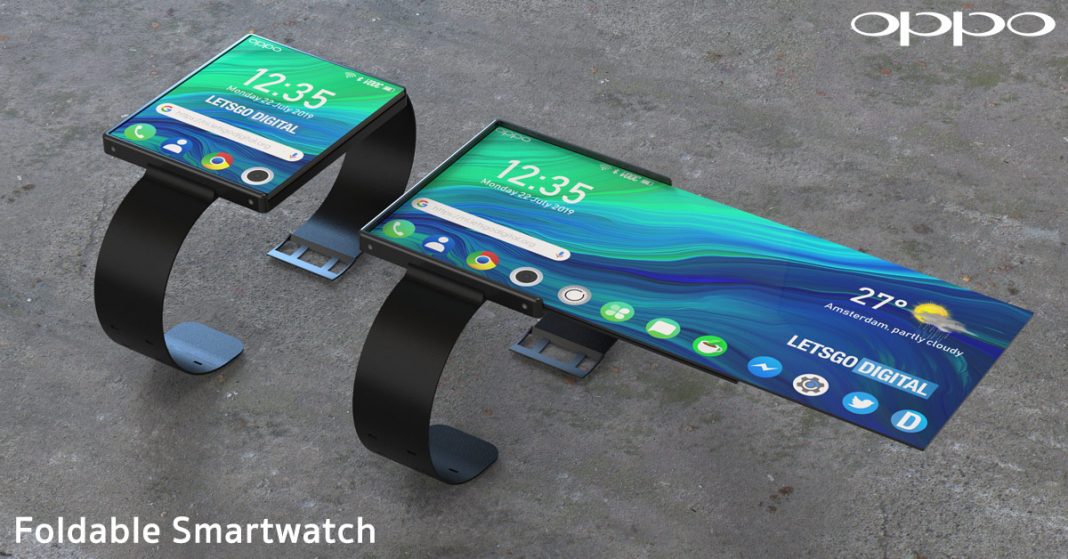 Foldable phones are going to become a thing. With the Royole FlexPai available for purchase, and the Galaxy Fold in its relaunch stages, foldable phones might soon go mainstream, if, everything goes well. But it seems, now, even foldable smartwatches will be a thing, too! Sounds crazy, doesn’t it? Well, it was the same before foldable smartphones. So, maybe, that’s why it didn’t stop Oppo from filing a patent regarding this!

The Chinese tech giant filed for a patent with the World Intellectual Property Office late last year. The patent entitled ‘Wearable electronic device‘ was published in September 2018 and describes a smartwatch with a flexible screen. The patented Oppo smartwatch has a regular watch strap and a rectangular-shaped screen. But the special feature of this phone is its foldable display module. The foldable display provides the user with a larger screen area with no time; if desired. Also, the smartwatch is wearable in both right and left hands. While wearing it in the right, the screen extends to the wrist; while on the left, it extends to the back of the palm. This design will ensure the screen will always get some base support and won’t be hanging in the air.

The smartphone will have two modes: a folded and unfolded mode, of course. When unfolded, the screen area increases by 200%, giving three times more screen space to the user. The user interface also changes depending on what mobile device is in use.

In the folded position, the extra display part is stored in the watch case, under the main screen. While the folding process is fully automatic, the watch case also has a recessed groove from which the screen can slide out.

However, there is not much information about this. And we don’t know if OPPO actually has this in development. But we know for sure that the foldable smartwatch will not come out any time soon as the company is yet to release even a foldable phone. And also, there’s the question of why would we need a foldable smartwatch…