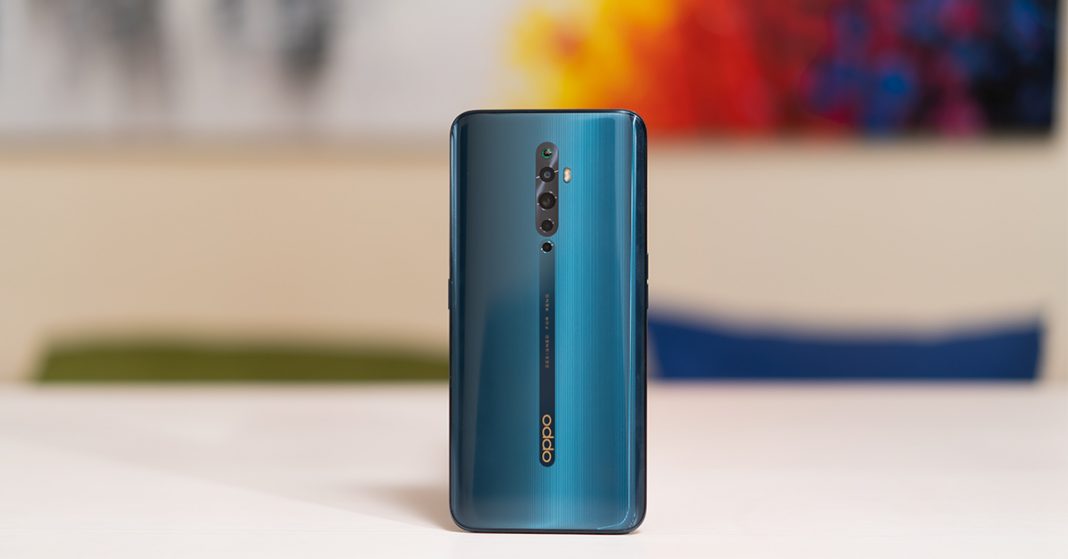 OPPO has some pretty interesting phones in their Reno line-up. In Nepal, OPPO has launched the Reno 2F recently. At first sight, I was particularly intrigued by the looks because it’s one of the very few phones with a seamless no-camera bump design.

But the upper mid-range smartphone segment has a lot for competition. So, can the Reno 2F stand tall among them? Let’s find out in our OPPO Reno 2F review.

When it’s about designed, I can hardly remember times when OPPO did it wrong. And I feel like the Reno series, among other things, nails their designs.

I mean, the back is so minimalistic and seamless that the aesthetics look very good.  And it feels good on the hands too. The Green color I have looks bold and classy and OPPO also has this distinguished green thing going on in the power button which I like. It’s a glass back with metal frames, so durability won’t be a problem unless you drop it. 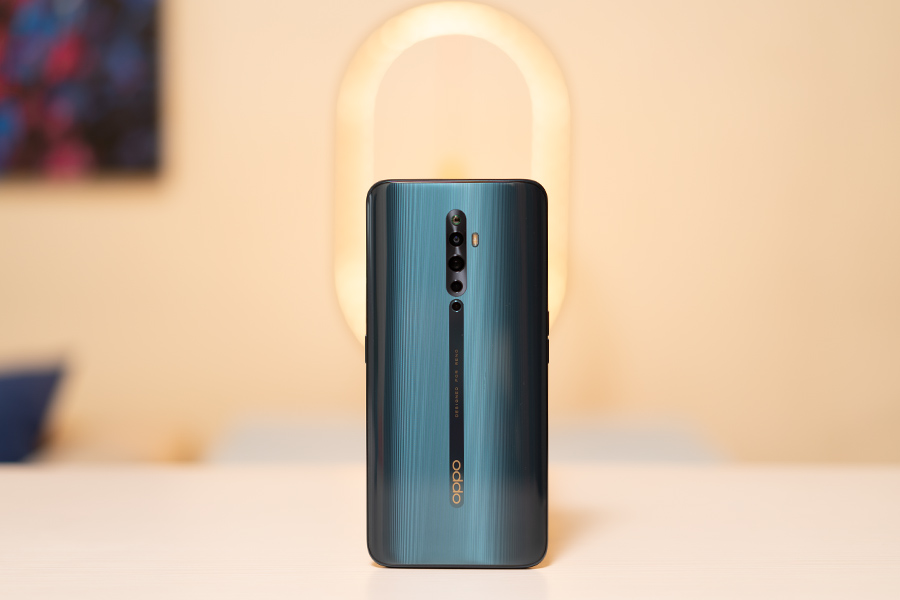 The buttons are placed in a reachable position on both sides. Down below is the headphone jack and just beside it, you find the USB-C port and a single firing speaker grill.

The fingerprint sensor is there on the front, an in-display one which is super-fast. Upwards, you only find a pop-up camera sitting in poise.

So, the design is something that has impressed me a lot. As I said, it’s minimalistic, it’s handy and all I can say is, this is one of the best designs I have seen so far!

The OPPO Reno2 F sports a 6.5 inches AMOLED screen with a 19.5:9 aspect ratio and a FullHD resolution. It’s clean because of the pop-up camera. Those thin bezels also add to the niceties. The good thing is that it has an anti-flicker mode to reduce the effects of PWM dimming 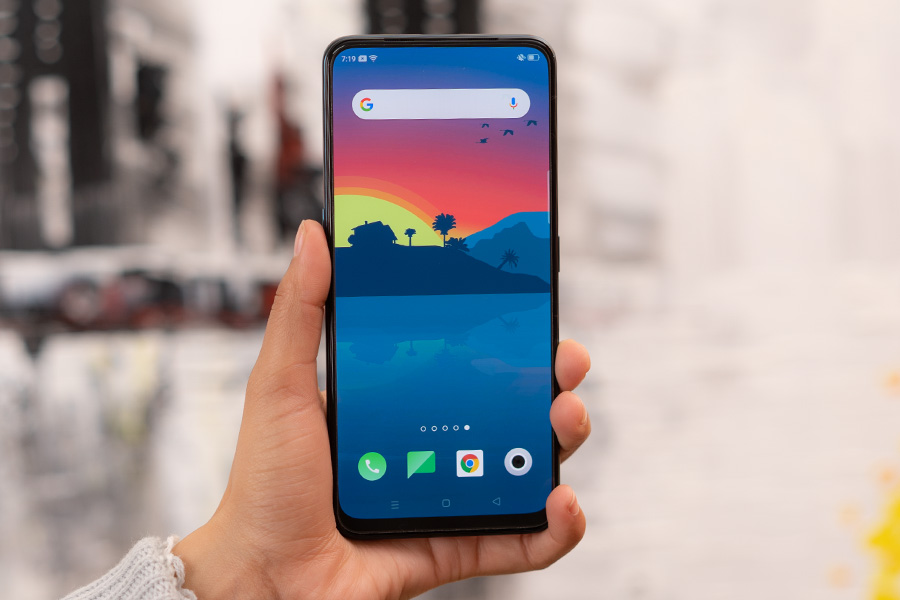 Since this is an AMOLED screen, you get an always-on display feature which I like keeping it on even though it chucks my battery a little bit. On to the core of the display, the colors are quite good, the contrast levels match my expectations and because it’s a notch-less screen I have loved playing games and watching my favorite YouTube channels. 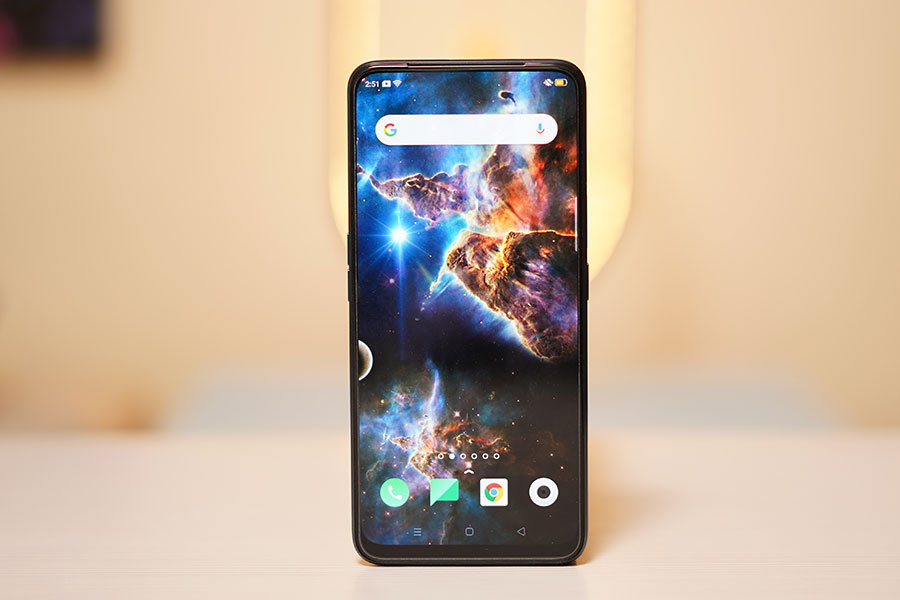 One thing though, I have always wished for more brightness in the display while using it outdoors. So, sunlight legibility isn’t that great. Indoors, you will have no problems whatsoever but outdoors, you’d definitely wish for more.

Like other mid-range phones out there, you get 4 cameras at the back. A primary 48MP Quad-Bayer sensor, then there is the 8 MP ultra-wide-angle lens, third we have a 2MP depth sensor and a final 2 MP mono portrait lens. Okay first off, what this mono lens does is help the black and white portrait images look good. And if it helps you understand, it’s the same as what was there on the A9 2020 which we reviewed a while back. And though I really don’t understand the purpose of it, it’s there!

Now, the ultra-wide-angle images are good looking and nice. There is a slight color shift in the wide-angle images from that of the normal ones but that should not be a problem considering the images look good anyways.

Normal Image Vs Wide-Angle Image
1 of 6

The normal images have a good balance of colors and saturation. Most of them have a cooler tone to them but it really depends on the situation. The HDR function works well which is a thing I like and dislike at the same time because it works very properly in the shadow areas whereas it tends to make the colors look slightly unnatural.

However, in the end, what matters is how the images come out and it’s not bad at all. Details, on the other hand, are well preserved too. Now, portrait images are not bad, but not very good either. I must say that I have missed a Telephoto lens here as the portraits from the telephoto lens have better subject focus. Selfies are also something I have liked a lot about the cameras of the 2F! They look natural and very pleasing. The HDR in selfies works very well too. You get a mixture of good colors and a good skin tone in the images.

There’s also a portrait mode for selfies and does a decent job. You also get tons of fun stickers like this one so it’s really interesting using this camera when you are bored or something.

Videos are also something the phone could have done better. And it’s not because the phone has a bad video camera or as such. In fact, the company advertises the phone to have ultra-steady videos which is true. You get good stabilized videos from this phone. But only in 1080p at 30 fps! You don’t get a 4K option here neither you can shoot videos in 60 fps!

Overall, the OPPO Reno2 F is a great camera phone for the price.

The performance is not one of Reno 2F’s strongest suits. The device gets its power from a mid-tier MediaTek’s Helio P70 chipset. And if you remember, the last generation OPPO’s F- series phones also came with this chipset, so maybe OPPO should have gone with a better one on this one.

With the Helio P70 chipset, you only get an okay-ish performance. Normal everyday tasks like messenger, WhatsApp runs fine. Opening of light Apps is fast, and multitasking 3 to 4 apps won’t be an issue as this one has 8GB of RAM. However, once you start gaming, you will then see the significant difference between a top-tier chipset and a mid-tier chipset like Helio P70. And Although Low to mid-tier games on the Reno 2F run without any issue, it’s high demanding games like PUBG that has stuttered in high settings with HD graphics. The best PUBG gameplay on the Reno 2F would be in medium settings, which I think is a let-off considering its price.

So, obviously the Reno 2F is not the best “price to performance” midrange phone out there. And this is where its competition has an edge with Snapdragon 855 on the K20 Pro (Read review) and Kirin 980 on the Nova 5T (Read review).

Talking about the software, the Reno2 F runs on Android 9 pie with Color OS 6.1 on top. And I like how much improvement this UI has got compared to its previous version.  The Color OS seems better optimized than before, the transitions have gone through improvements and the overall experience feels better if not the best. 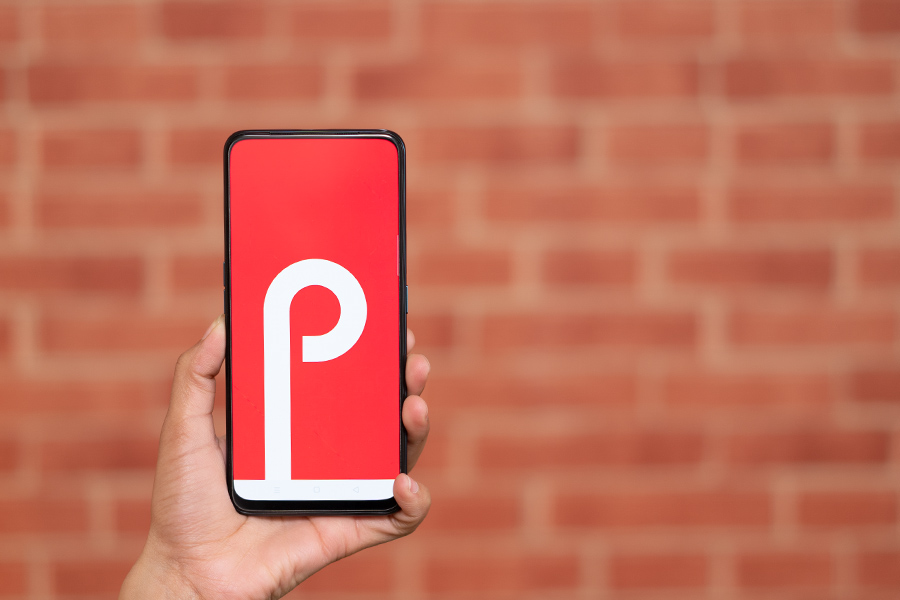 The only thing that’s missing is dark mode here which is weird considering it has an AMOLED display and could have saved some battery.

You get a good endurance with its 4,000 mAh battery on the Reno2 F. It might sound as if it’s the usual 4,000 mAh battery but in fact, the battery life has been very good in my usage. It gave me a full day of battery even with all my gaming and social media. 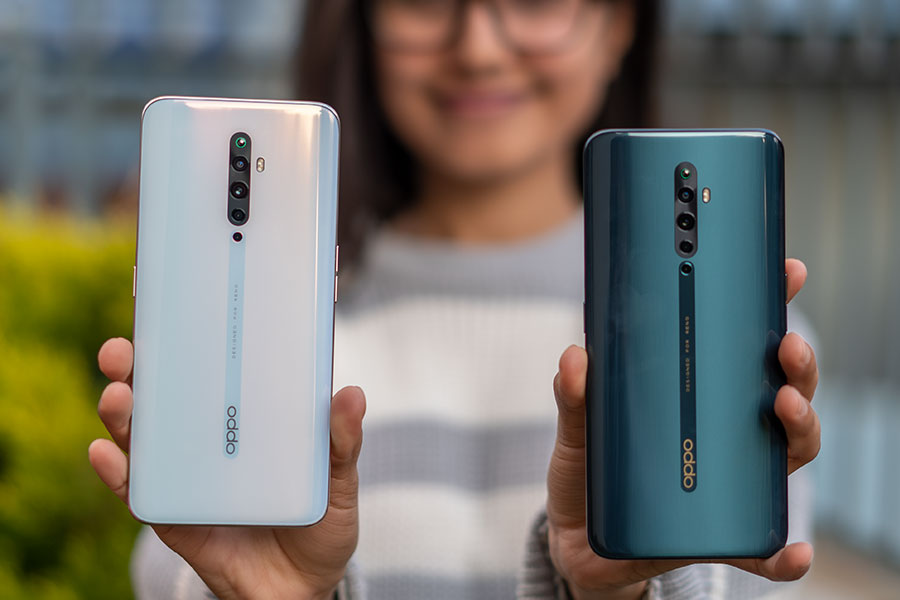 And impressive is the fact that it charges very quickly with its VOOC 3.0 charger. It took about one hour and 20 minutes to get charged form 0-100% which I think is very impressive.

The RENO 2f has a facial unlock feature for biometric security done by the pop-up selfie camera and although it is fast enough, I preferred the fingerprint option instead for security reasons.

Coming back to the Reno 2F, the speakers at the bottom do a good enough job although they are not very loud and it’s not stereo. The much cheaper OPPO A9 2020 had a stereo speaker, and this one doesn’t, which is again weird in my opinion.

To conclude, I would say that the Reno 2F is a very good smartphone. Performance, as I mentioned earlier, is not its strongest suit but the other aspects are very well covered by this phone. The cameras are impressive, the design one of the best I have seen so far, it has a good battery life, so it ticks almost all the boxes. Sure, if you want better gaming performance, you can go for the K20 pro but if that’s not the case, the Reno 2F can be a very good option.