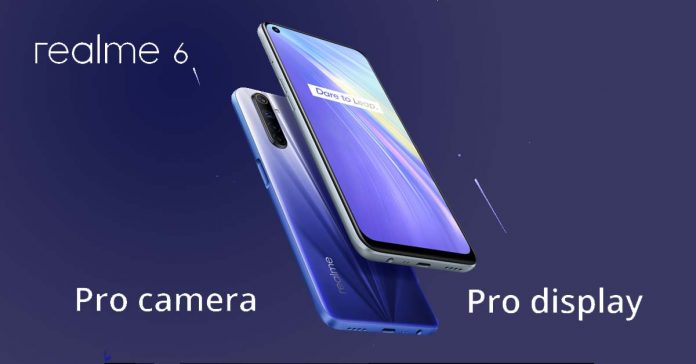 The company has said that Realme 6 is actually a successor to Realme 5 Pro. It comes with a 6.5-inch LCD display with a resolution of 2400 x 1080 pixels. The display comes with a circular cut-out on the top left corner to house the front camera. Because of the 90Hz refresh rate, the company calls this an Ultra Smooth display. There is a 60/90Hz intelligent switching technology in the device.

It is powered by MediaTek’s Helio G90T. It is a gaming-focused chipset that we earlier saw in the Redmi Note 8 Pro. Though both the devices come with the same chipset, Realme claims the Relame 6 offers better gaming experience in terms of frame rates and temperature. Although it is available in three memory configurations – 4/64GB, 6/128GB and 8/128GB, only the highest-end 8/128GB variant has been launched here in Nepal. The RAM and the internal storage on the device are based on LPDDR4X And UFS 2.1 respectively. The Realme 6 comes with what the company calls the 64MP Pro Camera. The primary 64MP lens here is the Samsung GW1. It is accompanied by an 8MP ultrawide lens, a 2MP BnW Portrait lens, and a 2MP macro lens. The camera comes packed with features such as Super Nightscape 2.0, Chrome Boost, AI Beauty. There are 4K video recording, and slow-motion video recording if you are into videography. Realme has also promised to roll out UIS Video Stabilization and UIS Max Video Stabilization through OTA updates.

For selfies, there is a 16MP in-display sensor on the front. The camera supports Automatic HDR, time-lapse, AI beauty, Portrait Nightscape, and slow-motion video recording at 120fps.

The phone comes with a 4300mAH battery with a 30W flash charging technology. The company claims that the 30W charger can fully charge the device in an hour. For security, Realme has included a side-mounted fingerprint sensor.

The official price of Realme 6 in Nepal is Rs. 32,990. This price is for the 8GB RAM and 128GB storage variants. It is available for purchase in Nepal starting from the 14th of July. As per the rumors, we can expect the Realme 6 to arrive officially in Nepal in May.

Check out our review of Realme 6 here: