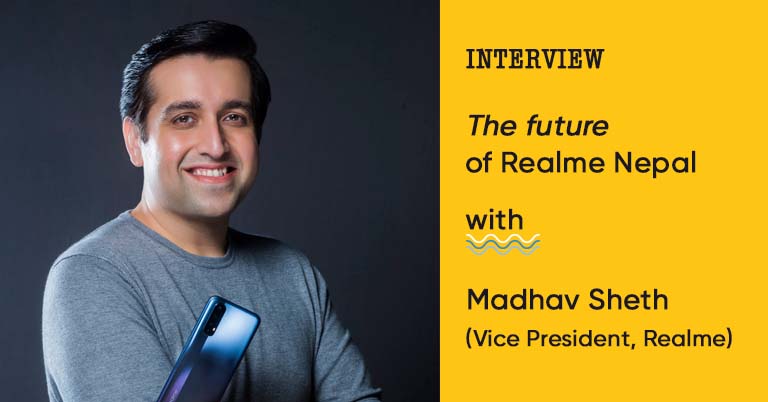 Nepal’s smartphone market just underwent one of the most exciting developments in recent times. While we’d been consistently let down by Realme Nepal’s launch delay and overpricing market tendencies, the company is effectively burning its bridge and heading for the new dawn under the new management. Now, the Realme India division will be looking after the operations of Realme Nepal—under direct leadership from Madhav Sheth whom we got to interview to clear out a few questions about this development.

In case you’re unaware, Mr. Sheth is the Vice President of Realme Global and the CEO of Realme India and Europe. We, alongside a few other Nepali tech bloggers, got a chance to talk with him about the future of Realme Nepal, and here’s how it went:

Q. Now, how long will be the delay between Realme product launches between Nepal and India?

A. It will be almost consecutive. Maybe not more than 15-20 days or at max a month. But I think it would be almost at the same time.

Q. About the products themselves, what variants will be coming to Nepal: Indian or Global?

Q. Can you disclose the upcoming devices in Realme Nepal’s portfolio?

A. (Realme) GT and GT Master is gonna be the upcoming device(s) which we’re also planning to launch in Nepal.

Q. What about the Realme X7 series?

A. (Realme) X7, X7 Max will be there but I’m talking about the new series which we’re going to launch, which is GT and GT ME (Master Edition). We’re even going to launch (them) in India. So I think those are going to be launched in Nepal as well—almost at the same time.

Q. How about the pricing of these products?

A. I have a different approach towards (the) market. I don’t handle (the) entire Realme, (but) I handle some of the markets of Realme. My approach is always working backward which is working for the consumers. This means that for me, consumer pricing, or consumer expectation, or consumer experience is the only thing that matters.

When I started this Nepal market, I told my management that if you really want to break through the Nepal market, you need to go through the consumer approach, not just to the distribution approach. So we need to find the right set of distributors, we have to cut off the trade margin that we could’ve very clearly.

Because they’re always comparing Indian websites or Indian prices to Nepal. And Nepal(i) consumers will definitely not prefer to feel cheated when they see Indian consumer prices. So that was the first task which I wanted to do. As I said (earlier), I work backward which means the consumer should not feel cheated.

(The) sixth thing we worked upon was the product strategies, what are the products we would launch. Only a few or all the products we have to launch here. But when I came to Nepal, my perception completely changed.

I was on a flight to Nepal with Nepal Royal Airways. Five people sitting next to me—all of them using an iPhone. (Maybe not specifically an iPhone but) a high-end phone which means the consumers want a good device in Nepal also. It’s just (about) giving more choices to the consumers.

[] Even in general, what we’ve found out is that if you have a 6/128GB and an 8/128GB variant of a phone, people tend to go for the higher-end option instead of the cheaper 6/128GB option. So, yeah there is a very good market for mid-range to high-end products.

A. Yeah. If the price difference is not too much, people who really understand specs would go for the (higher-end) 8/128GB version. Because they know what 8GB can bring to them—because RAM and ROM both are different things.

RAM, if you have a bigger RAM, you can store a lot of apps and they can run much better. But if you have (a) lower RAM variant with higher ROM, then your apps won’t run (comparatively) better because apps need space to run. RAM is one of the most important things for this particular task. So the internal RAM is extremely important.

Q. With Realme India looking after Realme Nepal as well, can we expect other Realme sub-brands like Dizo and Narzo to launch subsequently?

A. We are planning for Narzo and other AIoT products very soon. Probably what we want is that Realme establishes itself in the next 2-3 months’ time. Entire supply chain, product planning, launches, market strategies, consumer pricing—managing all these things is what I plan to do. If that is executed on the crowd at the right time, then you’ll see a lot of (Realme) products on the Nepal market.

Q. Competitors like Xiaomi have aggressively put on AIoT devices in the Nepalese market. So, can we hope to see something similar from Realme Nepal in the coming days?

A. I’m sure. You’ll see more competition here now. Once Realme comes into the picture, it’s always been known for being disruptive when it enters any market. Specifically, what happens is, when people get more choices, brands become more active, more proactive. What has happened up till now is that somebody is enjoying about 50% market share. And they haven’t bother about the customer pricing.

But when a bunch of competition comes into play, not only do the customers get more choices, but they start understanding the ground reality as well. And the ecosystem needs to have more choices. Not only for the consumers but for the entire ecosystem.

So, even if someday Realme occupies 80% market share, I wouldn’t prefer to be a part of the 80%. Because it’s not the right thing. Ideally, there should be 4-5 options in every single price range. That’s what I believe.

Q. The general consensus about Realme smartphones in Nepal is that they’re not privy to timely software updates. How will Realme Nepal address such issues?

A. When Realme launches an update, it’s always global. As I said, a lot of devices that have been imported unofficially in Nepal may not have been connected to the right network(s). Hence, that may be why we haven’t been able to send them the upgrades.

And this is another problem I’d like to mention. We manufacture stocks for India, we expect them to be latched to the networks in India. When we send the said updates, we have a complete ecosystem that determines which batch will receive them. Until now, we haven’t put Nepal’s telecom operators into consideration because we’ve assumed that those stocks were made for India.

So, we have indeed released batch updates for our products globally. But you can always share with me the phone’s IMEI number and I would also like to understand using that as a test kit, why the updates haven’t gone through.

Q. With respect to product launches and everything, the number of Realme service centers in Nepal is quite low. What can we expect from the reformed Realme Nepal in this regard?

A. There was no proper linkage of service centers before. And I’m going to make sure that spare parts are specifically available according to the volumes. What happens here has a lot to do with the economies of scale. Initially, nobody used to focus over here. There was no official channel to sell the products.

If there is no official channel, then there’s no official service center. That means there are no spare parts available. And that was what affecting the brand reputation too. Because when customers like you go to buy a Realme product, you couldn’t have known if it is from the official channel or not. You’re just gonna buy from them.

But practically we (Realme India) are not present here. Hence, I think that’s one of the key reasons took this step of coming down directly to Nepal—to set up everything from scratch.

Q. Can you also talk about building Realme Community for Nepal?

Maybe some country-specific content as well, but we will emphasize more on the products. Like, say she searches for Realme 6. She can go to the community and find all the content related to Relame 6 globally, not just Nepal. So, she can get more knowledge about the product because people from all the regions will be sharing the updates. It’s gradual progress.

A. See, setting priority is everything. There’s a customer, there’s demand. The bigger point is if I’m able to bring it the right way. With the right pricing and the right product. And at the same time, you have to ask what are the challenges you’re gonna face, do I have to take the same Jagdamba route or some other distribution route?

Because maybe Jagdamba is good at mobile phones and not particularly TVs or laptops. So we’re still evaluating that particular facet. And then we’ll go further.

Q. So, if Realme Nepal eventually launches laptops and TVs, then it might appoint new distributors?

A. Yeah, that is possible. As of now, no—but yes, it is possible for sure. Even for Narzo, we can somebody else. Narzo is definitely going to have a different distribution channel in Nepal like in India.

Q. Are previous Realme distributors in Nepal still a part of the organization or is Jagdamba the only one remaining?

A. We are talking with previous distributors as a part of our company culture. We are continuously talking to them and we’re assuring them we should work together for the best results. Because we need all the best people around Nepal to bring better results for the consumer. As I said earlier, for me, distribution is just a layer to reach customers.

It may be Jagdamba, it may be anyone else—that person has to match my vision. That person has to be very customer-focused and should be able to deliver the right products to the right place at the right time. All this, while ensuring that the pricing hasn’t been compromised. The dealer’s confidence should’ve been built by the channel.

Because the most important part in an offline market is about settling the schemes to the dealers. Suppose we’re launching a scheme worth NPR 6 crores for about 100 days. Now, the scheme has to go to the consumers and the dealers. It shouldn’t just be a PR announcement. That is the value which a company should make sure that it’s delivering.

And that is basically what we look into in any partnership. That’s the most important part. What we say, we have to fulfill it. Shanker Group has been known for keeping its promises even on spoken deals, and that’s extremely important. What they speak, they have to stand by it till the last line. Words are extremely important to me than any of the written commitments.