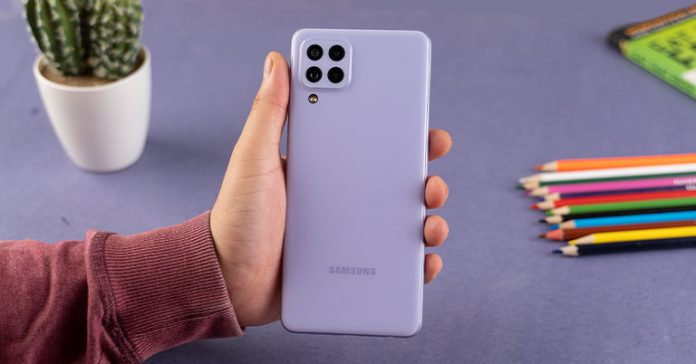 Samsung has finally unveiled the Galaxy A22. Its price hasn’t been confirmed yet but A22’s cost is estimated to slot in between Galaxy M12 and M32. So my guess is that it will cost around INR 14,000. The phone shares a lot of similarities with the more expensive Galaxy M32 but Samsung has made some subtle changes to differentiate it from the company’s M-series of smartphones. Here are my early impressions of the Samsung Galaxy A22 after having used it for a couple of hours.

Like I mentioned in the beginning, I have been using the Galaxy A22 for a couple of hours now. And the first distinction between the M32 and A22 can be noticed in the design front.

While Galaxy M-series of smartphones usually have this boring look, Samsung puts a little more effort into its relatively premium A-series devices. Here too, the A22 is reminiscent of the more expensive Galaxy A52 and A72. And personally, I love this design on a budget phone. The camera module here is more refined and modern-looking while the phone has a better hands-on feel as well.

Galaxy A22 is relatively light with a smaller 5,000 mAh battery whereas the M32 brings a bigger 6000mAh cell. Likewise, A22 also features a side-mounted fingerprint sensor and as expected, it performs like a champ. Just above it is the volume rockers. 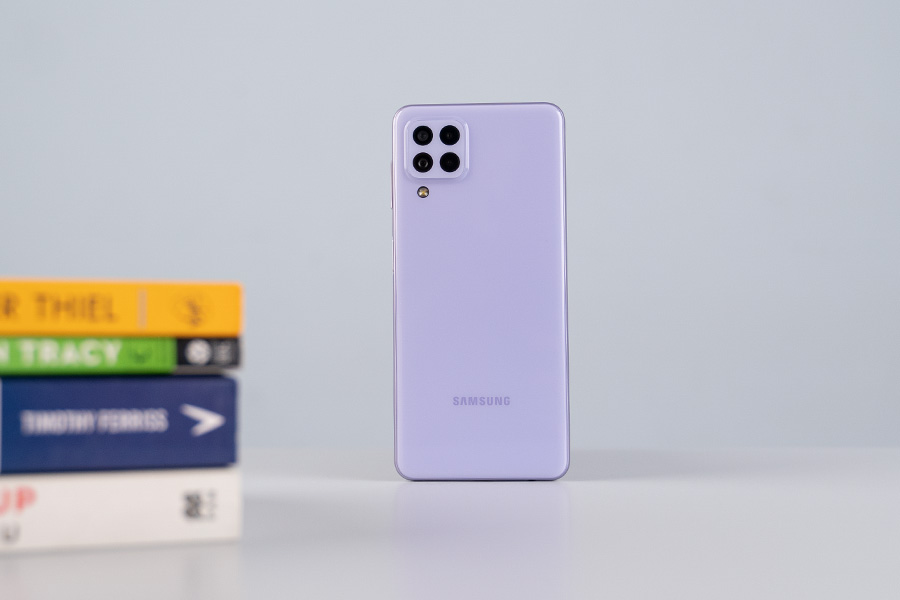 The left side stays mostly clean except for the dual SIM + micro SD tray. Down below, you get a single speaker setup, a headphone jack, and the USB-C charging port. On top of the design, the biggest difference between these two phones lies in the display side of things.

Disappointingly, Galaxy A22 features an HD screen in contrast to the Full HD display on the M32. Although this difference in resolution is not that evident under regular usage, upon a closer inspection, I did notice that the texts appear sharper on M32. The panel type is still Super AMOLED, so colors and contrast look equally good on both phones.

Also, Samsung has retained the 90Hz refresh rate for a smoother scrolling experience on a cheaper device like this. As far as my experience goes, Samsung seems to have optimized it quite well. Plus, the display is Widevine L1 certified too so you will be able to stream Netflix and Amazon Prime content in HD resolution.

Overall, even though Galaxy A22 has a passable display for everyday use, I think Samsung has unnecessarily cut corners in terms of the screen’s sharpness as Full HD resolution should’ve been the obvious choice here.

And oh, I almost forgot about this U-shaped notch approach, which looks a little outdated on both M32 and A22. So, if you are someone who’s coming from a phone with a punch-hole implementation, this notch will definitely feel out of style.

Okay, over on the performance department, you get MediaTek’s Helio G80 here just like on the M32. Now, because Galaxy A22 is expected to launch at a comparatively cheaper price, this chipset somehow makes sense on this phone. 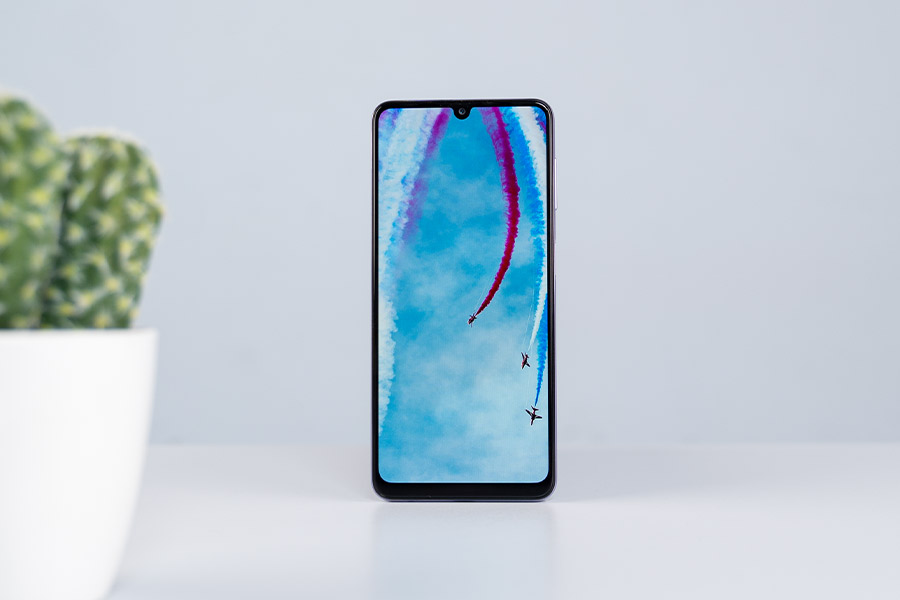 Normal usage hasn’t been a problem so far and games like PUBG Mobile run considerably smoothly at 40 fps under Smooth graphics and Ultra-frame rates. Still, Samsung could have given something like Helio G95 or Snapdragon 678 for even better performance.

Having said that, I guess the use of Helio G80 over and over by Samsung on its midrange phones has a lot to do with the ongoing global chipset shortage as well. Yes, I know the chipset shortage has hit other brands too, but unlike other companies,

Samsung launches its products globally—like on a large scale—meaning that Galaxy A22 will launch in relatively more markets compared to Realme or Xiaomi, whose products are don’t enjoy such worldwide release.

But excuses aside, performance has never been Samsung’s strongest suit in the budget and mid-range segment and I guess that is not the kind of audience the company is targeting with this phone, to begin with. I can say this because even with my limited time with the phone, I have been impressed with its cameras.

Spec-wise, you get a 48MP primary sensor and an 8MP ultra-wide lens followed by two 2MP depth and macro cameras. Additionally, A22 also features OIS which isn’t present on Galaxy M32.

I did manage to go around and click a few pictures and found A22 doing a better job than M32 in terms of color optimization. Here, the M32 produces saturated output while the A22 tones it down making the images look more pleasing. Similarly, with Galaxy A22, I noticed no focus issues while the M32 did struggle to lock focus in some instances.

In terms of portraits too, as evident from these photos, A22 produces better skin tone and manages to process dark areas better than the M32. Same goes with the selfies where the A22 has slightly better processing capabilities.

During low lighting conditions as well, Galaxy A22 manages to stand out ever so slightly with its tad better details and sharpness—all thanks to OIS.

Similarly, you get better video capabilities on the A22 as well, with stabilized 1080p 30 fps videos from both the front and back cameras.

However, do note that just like the M32, the videos are capped at 1080 30 fps only and you cannot shoot videos in 4K resolution or 60fps mode. This is basically due to the limitation with Helio G80, rather than the camera sensor.

Besides good camera capabilities, Samsung’s One UI is another show-stealer. This phone runs on One UI Core version 3.1 and feels quite well optimized.

However, I do wish that the phone features UFS 2.1 or 2.2 storage protocol over the aging eMMC standard, which has slower read and write speeds. And because of that, apps open slower, and installing them takes a bit of time. Then again, it’s a chipset limitation in the first place.

Alright, finally, let’s talk about the battery. As I mentioned earlier, in order to maintain a slimmer form factor, Samsung has trimmed the battery size to 5000mAh here—while most of its M-series of smartphones enjoy a larger 6000mAh battery.

Still, you can expect good, if not great endurance from Galaxy A22. Yet, the phone only supports 15W charging, unlike the M32 that supports 25W fast charging too.

Wrapping up my early impressions, I think with the Galaxy A22 and M32, Samsung is providing different choices to the customers. What I mean is that while both phones yield similar performance, one has better looks and OIS-enabled cameras whereas the other hosts better screen and battery endurance.

But given the cheaper price tag of Galaxy A22, I believe it is better value than the M32 considering the only downside here is its HD screen, which isn’t that bad given it’s a Samsung-made AMOLED panel.