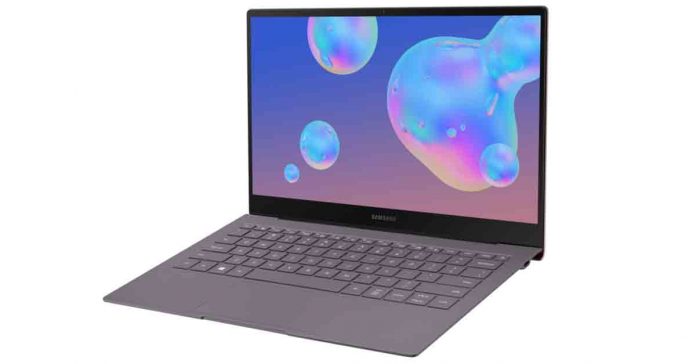 Samsung Galaxy Book S was debuted last year. It was the company’s take on lightweight ultrabooks with great battery life. The highlight of the laptop was the Snapdragon 8cx processor. This year, Samsung has refreshed the device with an Intel chipset. Let’s take a look at specs, features, and availability of Samaung Galaxy Book S 2020.

Samsung Galaxy Book S 2020 features the same chassis as its predecessor. It features a light clamshell design with a metal build. Samsung has incorporated a fanless design to make it both light and quiet. The device weighs just 950 grams and is 11.8mm at the thickness point. The numbers reveal that the fresh iteration has made the Galaxy Book S, even more light and portable. The display remains the same – 13.3-inch TFT LCD panel. The FHD display also supports touch input. Samsung has included an Outdoor Mode, that lets you scale the brightness level up to 600 nits using a two-key shortcut.

With the new Galaxy Book S 2020, Samsung is looking to overcome some of the shortcomings of the Snapdragon processor that was used in its predecessor.

The new Samsung Galaxy Book S 2020 comes with an Intel Lakefield processor. It is the first laptop to come with this new processor that we know very little about except for its hybrid design. Intel has tried to replicate the big.LITTLE design of ARM chipsets by combining Atom and Core CPU. The chip is based on Intel’s Foveros Technology, which is a fancy way of saying Intel has used chip-stacking to combine dies of different process nodes to come with a smaller design. The result is expected to be more efficient than Intel’s Atom processor, but we will have to wait to see if it fares against its Snapdragon counterpart. What we are certain of is that the inclusion of the Intel processor will overcome the compatibility issue of its Snapdragon counterpart. The latter faced problems running some Windows 10 applications. With Intel’s processor, users don’t need to worry about that again.

The new Samsung Galaxy Book S will come with 8GB of LPDDR4x RAM. For storage, the company is offering two variants of the device – one with 256GB and another with 512GB of internal storage. The availability of the latter will vary with regions. The storage is based on eUFS technology.

For connectivity, it comes with support Wi-Fi 6 (Gig+), Bluetooth 5.0, and LTE (Cat 16). The latter will only be available in a specific region. Users get two USB-C ports, one headphone-mic combo jack, and a MicroSD card slot. It comes with a fingerprint sensor for biometrics and an ambient light sensor for the Keybaord Backlit feature. Samsung is also providing quad-stereo speakers tuned by AKG with support for Dolby Atmos.

The battery size has remained unchanged at 42 Watt-hour. But with the change in the processor, we don’t know how long the new Samsung Galaxy Book S 2020 can last in a single full charge.

Samsung hasn’t given an official launch date, but the Galaxy Book S 2020 (Intel) will first launch in Korea. We need to wait for official confirmation information regarding pricing and availability.