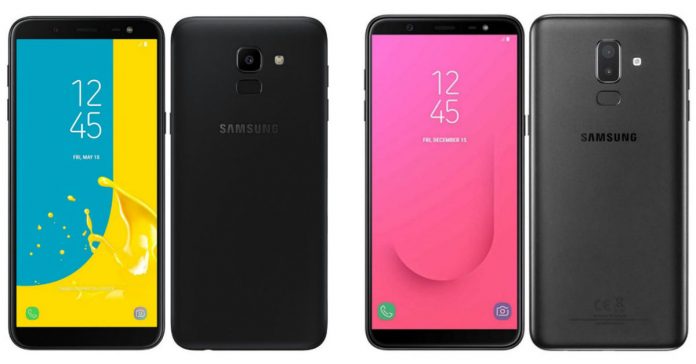 Among the two, Samsung Galaxy J6 is the more affordable handset. The smartphone comes with the 5.6-inch infinity display contributing to an appreciable 75.9% screen-to-body ratio. The resolution of the display is only HD+, which results in a pixel density of 294 PPI.

Powering the device is the Exynos 7870 chipset backed by either 3GB or 4GB of RAM. On the storage side, there are two variants. The base variant consists of 3GB of RAM whereas the premium variant enjoys an ample 4GB of RAM. We have seen Samsung presenting the J-series smartphones with a camera-centric approach. And this time is no different. The smartphone embraces a capable rear camera of 13MP and a remarkable selfie shooter with an 8MP sensor. Both of them are assisted by an LED flash.

In terms of software, the Galaxy J6 enjoys Android Oreo out of the box with Samsung’s Experience UI on the top. For the security purpose, a fingerprint sensor is also provided to the device, which is mounted at the back just beneath the camera. The device is fueled by 3,000mAh battery.

The device is powered by the Snapdragon 450 chipset with 4GB of RAM alongside. On the storage side, there is reasonably sufficient 64GB internal memory. In case of insufficiency, the storage can also be expanded up to 256GB using an SD card. And there is a dedicated SD card slot on the phone for memory expansion.

In terms of camera, we can see a huge potential in the Samsung Galaxy J8. It sports a dual camera setup comprising of 16MP and 5MP sensors. With this setup, the smartphone is believed to capture not only abundant details in the images but also the nifty portrait shots. Furthermore, both the cameras at the back possesses a wide f/1.9 aperture. So they also have a huge scope even in the low lights. Up front, there is a 16MP selfie shooter with a dedicated LED flash alongside. Galaxy J8 also comes with a rear-mounted fingerprint sensor. And to add another layer of security, there is Face Unlock feature. The device also contains a 3,500 mAh battery to fuel the processes inside the device.

As soon as the phone was launched, we had a conversation with Samsung Nepal officials. During the conversation, the officials were eager to launch the Galaxy J6 and J8 smartphones in Nepal. But when we asked them about the launch date, they were hesitant to give us the exact date. But implicitly they implied that the J6 will launch in the last week of June and J8 in the first week of August. When we tried to dig into the pricing strategy, the officials assured us that the prices of these newbies would be close to an international pricing.

So what are your thoughts regarding the Samsung Galaxy J8 and Galaxy J6? Which one interested you the most? Let us know in the comments.