Given its budget nature, the Galaxy M01 Core bears an outdated design. While modern budget devices are moving to notch and punch-hole display, M01 Core comes with traditional bezels. It features a 5.3-inch PLS TFT LCD screen with an HD+ resolution of 1480 x 720 pixels. The chin is reduced to what we saw on the J2 Core 2020 and thus, there is no place for any physical button or branding. 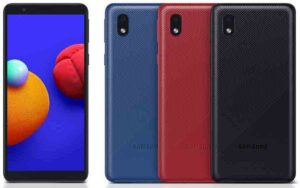 The majority of the back panel is covered with stripes. Samsung is calling it a stripe design, because duh. A pill-shaped module houses a rear camera and an LED flash. Samsung Galaxy M01 Core is 8.6mm thick and is available in three different colors – Black, Blue, Red.

Here, the phone is equipped with MediaTek’s MT6769 chipset. It consists of four ARM Cortex A53 cores clocked at 1.5 GHz. It is available in two memory configurations. The base variant comes with 1GB of RAM and 16GB of internal storage. Similarly, the other variant pairs 2GB of RAM with 32GB of internal storage. Users can expand the storage up to 512GB with the help of a microSD card. The phone runs on the Go edition of the Android 10 operating system. 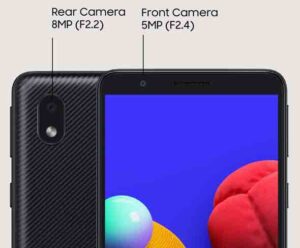 Samsung Galaxy M01 Core features a total of two cameras; one at the rear and one at the front. The rear camera has an 8MP sensor and f/2.2 aperture. It supports autofocus and can shoot FHD videos at 30fps. It is enclosed by a pill-shaped module, alongside an LED flash.

Similarly, the 5MP front camera has an aperture of f/2.4.

The device gets its juice from the 3,000mAh battery which boasts of 17 hours of talk time. Similarly, Samsung claims that the Galaxy M01 Core can provide 11 hours of offline video playback and 14 hours of internet browsing (over 4G LTE network). When it runs out of juice, you can charge the device via the micro-USB port. It supports GPS and Glonass for navigation and positioning. Sadly, there is no fingerprint sensor for biometrics.