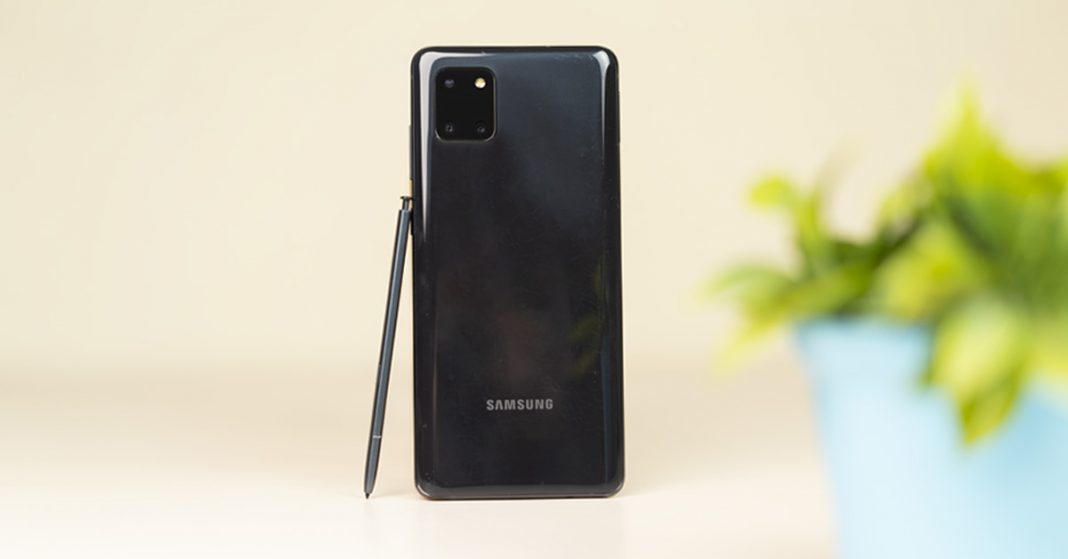 Samsung’s Note lineup of smartphones has always represented the best of Samsung, year after year. However, the majority of the smartphone consumers simply couldn’t experience the best Samsung had to offer because of its premium price tag. And this is where competing devices from manufacturers like OnePlus, Xiaomi, and even Realme are capitalizing on. Well, that’s good for the buyers as well. Why pay a thousand bucks for Samsung’s finest when you can get similar utility from a phone that costs about half or even less.

However, that’s about to change as Samsung is finally standing up against the gradually changing market trend by introducing the “lite” versions of its flagship smartphones. The latest Galaxy S10 Lite and Note 10 Lite both borrow some features of their regular flagship counterparts for almost half the price! I have the latter with me today, which is the more interesting of the two. Let’s dig in to find out more about it and how it manages to stay different from the regular Note 10/10+.

So, what exactly did Samsung do to bring a Note device at a more affordable price? A number of things.

Starting with the design, the Note 10 Lite has a flat display panel to the curved ones we’ve admired on the Note 10. With this, there’s a considerable amount of side-bezel, but I’m sure many people will be fine with it anyway since the vivid 6.7-inches “Infinity O” Super AMOLED FHD+ screen is stunning on its own.

This is still a 60Hz panel and it looks like we’ll have to wait just a little longer for a Samsung phone with a higher refresh rate display. But what’s impressive here, is that the circular cutout has been noticeably minimized resulting in a much cleaner look.

More on the design, both the power and volume buttons are on the right-hand side of the Galaxy Note 10 Lite, which are sufficiently clicky to my liking.

Things get interesting on the bottom of the phone, where you’ll find the S-pen, a speaker grille, a Type-C port, and… a 3.5mm headphone jack. That alone makes the phone worthwhile if you ask me.

Moving on, the ultrasonic fingerprint scanner that you’ll find in the expensive Samsung smartphones has been swapped with an optical one on the Note 10 Lite. And like every other optical in-display scanners we have seen on the company’s A-series, this one too is a bit slower than what we are accustomed to. So, I think most of you will be relying on the face-unlock because it is very very fast.

Apart from the things I’ve already talked about, what’s next in terms of cost reduction? Build material. As you can see, the curves here are not as perfectly crafted like you see on the Note 10. Also, it has a glasstic back, which the company says is a combination of plastic and glass-molded together, which makes for a great look and a shiny design throughout the device.

It comes with an aluminum frame though, but the absence of a glossy glass frame like on Note 10 is no surprise at all. Nevertheless, the phone looks beautiful and has a comfortable grip.

The Note 10 Lite, on the other hand, is heavier than the Note 10+ or say the OnePlus 7T, but the extra heft is maybe because of the inclusion of the bigger 4500mAh battery.

Okay, moving to the back, the similar triple camera setup is now arranged differently on a square module. Regardless of the design choice, the Note 10 Lite’s camera is almost identical to that of the Note 10. There’s a 12MP primary lens with OIS and Dual-Pixel PDAF, a 12MP telephoto lens, and another 12MP ultrawide sensor. The primary 12MP camera of the Note 10 Lite gives off similar images like that of Note 10. Apart from the slight difference in color tone, everything is identical – from details to dynamic range to overall image quality. In most of the case, I found the Note 10 Lite to have more accurate colors.

The portraits are done by the Telephoto lens and here as well, the images are almost identical to that of the Note 10. And that’s great news because the portraits on these devices have good background blur and excellent subject focus.

Moving on to the wide-angle lens, the Note 10 Lite has a 12MP sensor instead of 16MP which you get on the Note 10. However, image quality is more or less similar. Maybe the Note 10 is slightly better, but it’s not profound at a quick glance.

You also get 2X telephoto zoom, whose quality is very good, just like the Note 10.

The front camera, on the other hand, shares a different story with an upgraded 32MP lens which captures 8MP pixel-binned images. 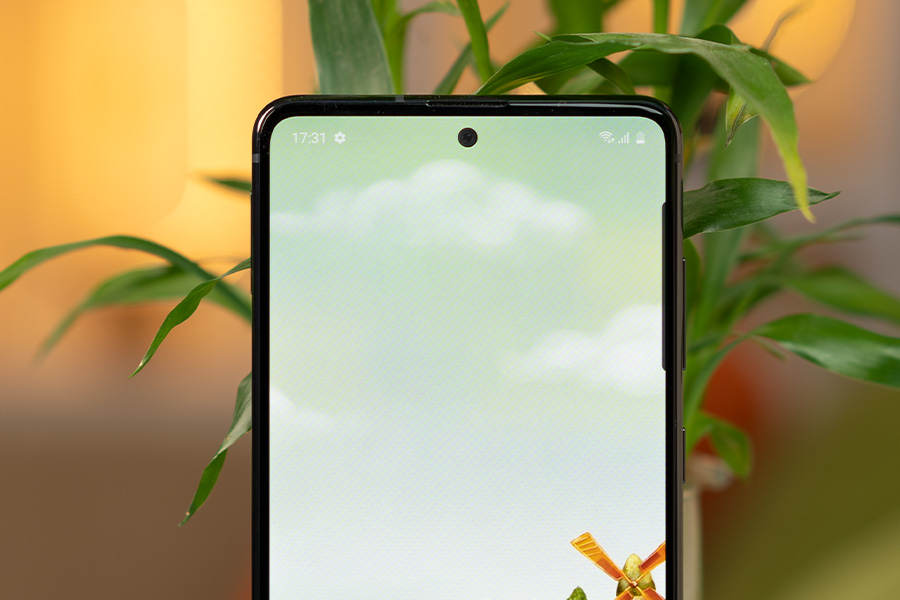 The selfies are nice too with vibrant colors and a fine amount of details. You can also take portrait selfies and the software-based background blurring is decent.

In terms of video, there is OIS even at 4K 60fps and the quality is on par with the Note 10. You also get super Steady Mode that has a wider field of view and even better stabilization. Other video features like Super Slo-Mo, Slo-Mo, and the likes are also present here.

One more thing, you can expect even better results on the final retail unit since the one I have is just a sample and doesn’t entirely represent the end product. But what’s certainly missing here, is the variable aperture. The primary 12MP lens on the Note 10 Lite has a fixed f/1.7 aperture compared to the flexible f/1.5 – 2.4 on the regular Note 10.

Being a “Note” phone that it is, there’s the coveted ‘S’-pen as well. You can make notes, create doodles, trigger camera, make selections, etc. using the S-pen like you would on the Note 10.  We know the S-pen on the Note 10 lite doesn’t have a gyro sensor but it’s unclear if Samsung’s made any other compromises to it as well. I’ll have the answer on our full review video of the Note 10 lite.

Now let’s get to the performance. The phone is powered by the octa-core Exynos 9810, which is the same chipset on Galaxy S9/S9+ and Note 9, which makes it almost a 2-year old chipset.

Having said that, the Exynos 9810 is definitely not a dumpster fire of an SoC and rather is a decent mid-ranger for a 2020 smartphone.

On the memory end, Galaxy Note 10 Lite comes with either 6 or 8GB of RAM and runs on Samsung’s One UI 2.0 based on Android 10 out of the box.

The transitions and multi-tasking are adequately smooth, and well, you know how much I admire One UI. It is my favorite Android skin and One UI 2 just builds on the success of its predecessor. I love what Samsung has done with the camera app UI and the overall experience in general.

Storage-wise, the Note 10 Lite only ships with a standard 128GB version, which can be considered as the downgrade from the regular Note 10 which came with a base storage of 256GB.

But fret not because unlike the Note 10, you can expand it via a microSD card. Still, big internal storage would’ve absolutely been the cherry on top. Well, if the storage let you down, the battery on the Note 10 Lite will cheer you up right back!

Despite a big battery, Samsung is reserving the 45W charging for its premium flagship phones, as the Note 10 Lite only supports 25W super-fast charging. That is plenty fast in itself, so no worries there. 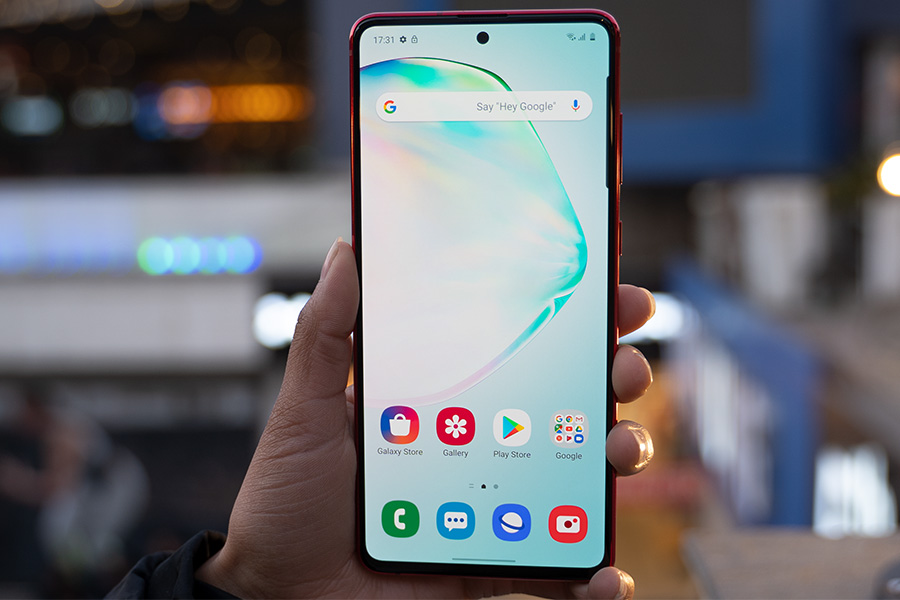 Apart from the fast wired charging, the Note 10 Lite also falls behind in terms of wireless charging – such that it doesn’t support it. Also, you don’t get dual stereo speakers here.

No IP certification on the Galaxy Note 10 Lite!

But the bigger blow definitely is the lack of any IP rating on the phone.

Yep, no official water/dust resistance certification, which has always been one of the key justifications when defending an expensive phone. And it makes sense, Samsung needs to pay a certain sum of money to acquire an IP rating, so why bother with it at all for a low-cost flagship phone like the Note 10 Lite.

Now, I’ve been going on about how the Note 10 Lite is an inexpensive option to the regular Note 10 or Note 10+ throughout the video. So, let’s finally discuss its price. There you have it, our hands-on impression of the new Samsung Galaxy Note 10 Lite. With its older chipset, it’s definitely not for a power user. But the intention behind the launch of an affordable “Note” smartphone is clear – making the S-pen more accessible than ever.

Previously, you didn’t have a decent Samsung phone in the 500-dollar segment. But now that there is, customers have all the more reason to stick with the Samsung ecosystem, rather than stray away for smartphones from other companies. And that… is exactly what the company has in mind.

Sure, it skimps on certain aspects like performance, build material, IP rating, etc. but that is to be expected. Samsung wants everyone taking note, including its competitors that it’s coming for the upper mid-range market and the Note 10 Lite could do just that.