With smartphone companies focusing on getting large display experiences, I almost forgot what it was like to hold something that fitted snugly in my hands. Enter the Samsung Galaxy S10e! A phone that is just the right size, cuts just the right corners and does ALMOST everything right. Now, this is a semi-flagship phone, and it’s a nice concept to provide users a flagship experience for a not-so-flagship kind of money. And why should you choose this over the other larger variants of the Galaxy S10 series? Let’s talk about it.

I’ll start by talking about what I liked the most – its compact size, nifty design, and how perfectly it fits in my hand. Its small size is, surprisingly, one of its major attractive features. I don’t have anything against a big screen experience, but you need to hold it to believe it. It’s super manageable in the hand, yet doesn’t skimp on power!

Curved edges surround the phone, but it doesn’t have tapered sides of the more expensive Galaxy S10 models. Nevertheless, the flat screen works really well – if anything, I didn’t even feel its absence. With a Gorilla Glass 5 both front and back, the phone does look premium, but Samsung chose to go with a Gorilla Glass 5 instead of the 6 like on the larger S10 variants. I wonder how much money they saved with it…

Anyways, the power button on the right embeds a fingerprint scanner as well. It’s another cut-back, but no complaints. It’s faster than the in-display scanners, anyway. You still get the 3.5 mm headphone jack, and there are dual speakers on this thing – one at the bottom, and another one on the earpiece. And together, they make for some good stereo-like audio experience.

Overall, I think the best part about this phone is its form factor while still packing the power.

However, having a smaller size also makes for a smaller display. The Samsung Galaxy S10e features a 5.8” Dynamic AMOLED punch-hole display. There are some bezels around the sides and a chin, but they’re not all that intrusive. If you’re coming from older Galaxy devices, then, it won’t even matter. The display clocks at Full-HD+ resolution, not QHD like the bigger variants. But I feel like QHD is not even necessary. Yes, they do give you some wonderful experience, but all content is not QHD. Plus, it eats up your battery. I even set the display on the Galaxy S10 to Full HD+. So, for this small device such as this, a Full HD+ is more than enough. The Dynamic AMOLED does a great job with colors. Colors are vibrant, and the amount of details are great. Plus, having a smaller display makes for crispier pixel density! Samsung is on top of their game in displays, and it shows. Plus, it supports HDR 10+, meaning that you can watch selected contents with a wider dynamic range. The small punch-hole is also not very intrusive, and won’t affect your viewing experience all that much. With clever wallpapers, you can easily hide it. And most times, you won’t even notice it’s there!

As for the cameras, the Samsung Galaxy S10e packs a dual camera set up at the back – a 12 MP primary lens with variable apertures, and a 16 MP ultrawide-angle lens. These are the same lens as on the larger S10 variants, so, no compromises here either. 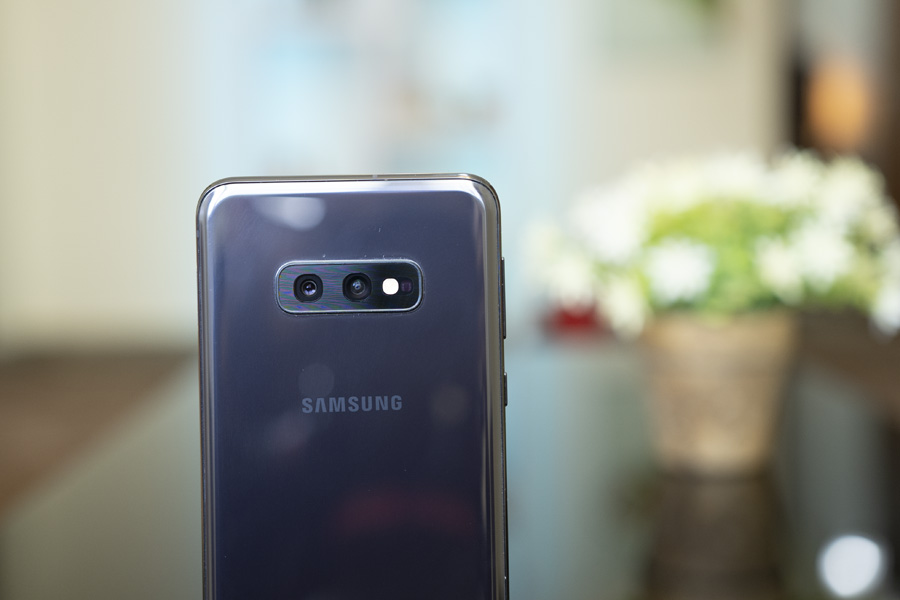 And the photos look wonderful. In bright light, the camera performance is as expected: sharp, packing a lot of details, excellent dynamic range and noise-less. Colors are pretty accurate, too, and most of them feel true to life. There is a slightly warm tone on the images, that looks pleasing to the eyes, though.

With the Scene Optimizer on, images look a little more vibrant. Some colors look juicier, while others can look a bit too overboard. As it is with these AI image enhancements, you have to use it only when necessary.

The ultrawide-angle camera is a fun one – to say the least. You can capture panoramic scenes and get more in your frames, and this is the one to use when it comes to capturing sceneries or group photos. The image quality on this one is also as good as ultra-wide-angle lenses can get. Images from this one have good dynamic range and color reproduction, and to me, they didn’t look very different from the primary lens in terms of color accuracy. Also, the software deals with the fish-eye effect quite nicely.

Now, the main competitor of the S10e is the Huawei P30 for now – and the advantage the P30 has over this is a dedicated “Night mode” which this one doesn’t have…apart from the extra telephoto lens, of course. However, there is a sub-menu under Scene Optimizer which lets you take images even in extreme low-light conditions. The S10e might get a Night Mode in later updates, but until then, what it has is not as good as a dedicated Night mode on the P30. We’ll compare the P30 and S10e some as well soon, so stay tuned for that!

Samsung’s Live Focus is what makes for the portrait mode. And normal portrait images are as good as portraits go. The subject is detailed and edge detection works most times. There are also a few bokeh effects like Zoom, Spiral, and Monochrome. While I used the Zoom and Spiral effects very less, I liked the Monochrome a bit more. But its edge-detection needs some polishing. The good thing about its portraits is you can change the blur level and background effects after clicking the pictures as well.

The 10 MP selfie camera on the Samsung Galaxy S10e, mostly, does a good job too. 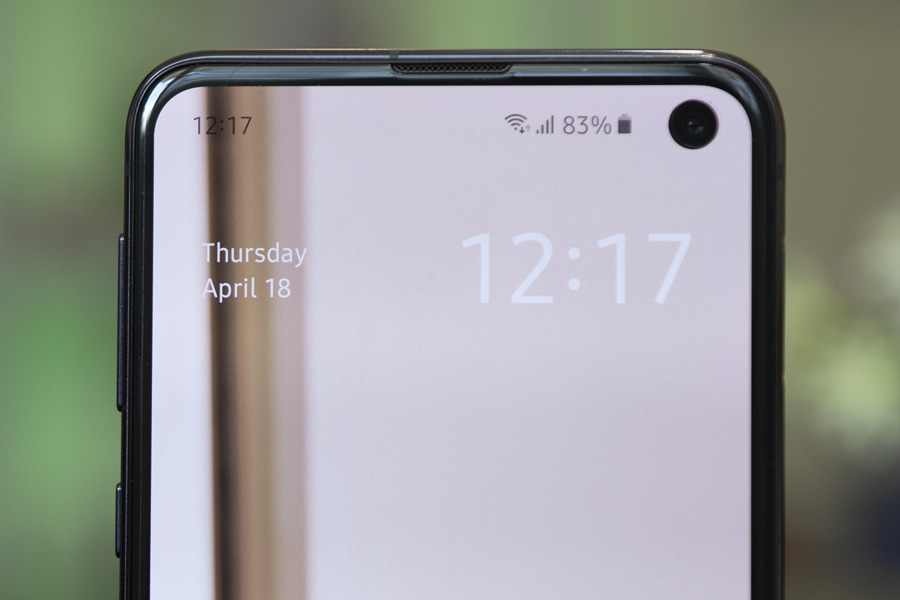 Selfies are detailed and the skin tone looks almost natural. Facial features are well preserved, and the portrait selfies do a great job too, considering, there is no dedicated depth sensor. You also have a wide-angle option on the selfie camera which increases the field of view slightly. But without a dedicated sensor for it, I think this is just the regular camera with two different FOVs. Low light selfies are no use at all!

This phone is packing the same lens as the other S10, but I couldn’t get it to record 4K video on it as others claim. There is Full HD+ video with a full-fledged OIS at work, it does a great job of stabilizing! You also get the Super Steady mode, which uses the ultra-wide lens and captures a 1080p video, which is super smooth, but there’s no auto-focus in it.

So, in terms of cameras, Samsung delivers. But there are some aspects in which it needs work.

Moving underneath its skin, it packs the same Exynos 9820 chip as on the other variants. Even though the Samsung Galaxy S10e is small, it does not compromise on power. And coupled with 6 GB RAM, there’s nothing it can’t handle. I don’t even think I need to talk a lot about it…everything is solid!

Here are the benchmark scores:

Gaming on it is a breeze, too! I played PUBG before it was banned, sadly. It ran on the highest of settings available, at HDR and Ultra frame rates, and there were no lags or stutters of any kind. The game-play is so smooth, that it makes you want not to stop playing at all. Other games like Asphalt 9 are also super smooth.

But one thing that got me concerned is the heating issues. There were instances it heated up while charging and gaming. Maybe it is to be expected of a powerful phone of such size, but sometimes, it also heated up when it was just lying idly in my pocket! I wouldn’t be so concerned if not for the Galaxy Note 7 Battery Gate! If you’ve faced any such issues, let us know too. You know what else is hot, though? It’s Samsung’s One UI. Based on Android Pie, this OS is a lot better than previous Samsung Experience UI. It is more user-friendly, too, and just easier to do stuff with. Some settings have changed headings, but you can easily find them with the search option.

It really makes one-handed usage easier, too. You can simply swipe up or down anywhere on the screen to pull up the app drawer. You also get the sidebar for the shortcut to some apps.  There’s also a lot of customizations available. Plus, the gestures are a lot easier to use… They’re just revampings of Samsung’s on-screen buttons, actually, but that makes it all the better

This part of the Samsung Galaxy S10e, however, is the deal breaker! The battery. It has a 3100 mAh battery, which, to be honest, is not enough. It is barely enough to last you through the day, and you will be looking for your charger by the end of the day.

Plus, you get no LED notification lights, so, you kind of have to keep the Always-On display on. And that chugs your battery even more. Now I get that the small size cannot accommodate a very large battery, but maybe just a teeny increment? I mean, this is basically a powerhouse in chains!

It does have fast charging, though. But with the 15-Watt Adaptive charging, even this small battery takes about 1 hour and 35 minutes to fill up…which is not very impressive is it? Anyways, if you don’t mind carrying your charger around, and are not too much of a heavy user, this might not bother you.

Okay, what to make of the Samsung Galaxy S10e? Besides the battery, everything on this phone seems stellar, or close! And all I can say about this phone is that size doesn’t matter! All that you want – the latest of hardware, top quality display, stellar cameras are packed in this small but premium and snug body. And if you can get all of that in such a comfortable size, do you really need to go big that won’t even fit in your pocket? 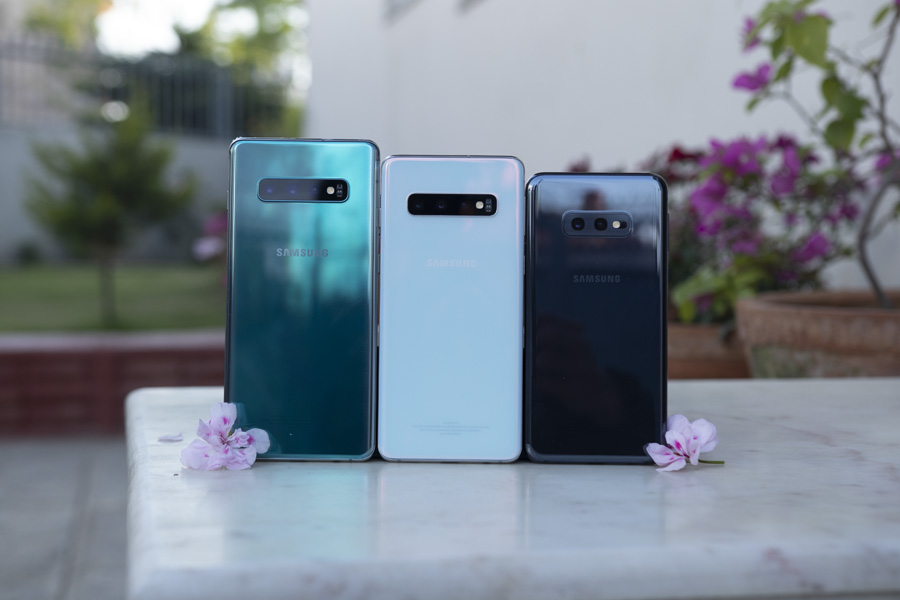 And that brings me to another question – with flagships getting bigger and more expensive, are these semi-flagship phones starting to make more sense? I mean, if you look at Huawei P30 Pro and P30, the latter packs much of the same stuff in a smaller and more affordable body as well. And it seems to me that these are the better value for money devices.

Moreover, this phone is really an answer to the iPhone XR, and while the XR may beat it in performance, the S10e leaves the XR in the water, in other aspects. Top of the line AMOLED displays and 2 cameras are enough to make a gap between those two devices. However, there are other phones like the Xiaomi Mi 9 with similar hardware, AMOLED display, and similar camera for a much lesser price. And probably the OnePlus 7 will surely be a better value for money.

But would I recommend this? For a difference of $150 in price with the S10, it has its fair share of compromises. One less camera, small battery and a slightly lesser build. But while I think the S10 is a great phone, you won’t go wrong with this $750 semi-flagship phone either. Especially, when you get great offers on it in Nepal!