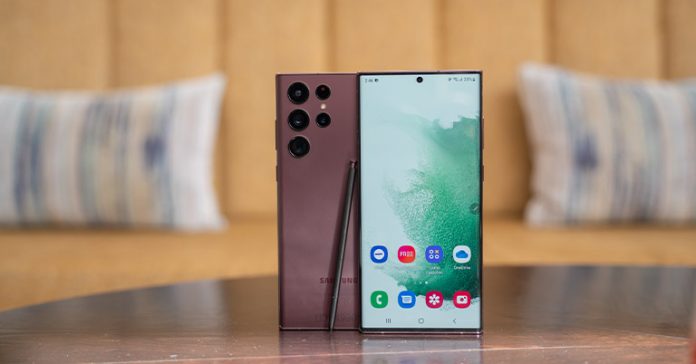 In this Samsung Galaxy S22 Ultra Review, I will be talking about all my experiences with this top-of-the-line flagship phone. Here, I have been using it from the very first day of its launch. Technically, I had been reviewing other phones in between too. But this has been my primary phone all the way. As a result, basically, my personal accounts including WhatsApp, and messenger are all here. And after using the S22 Ultra for a good number of days, I am finally ready to give my final, long-term verdict about it.

First things first, I have to appreciate how amazing the S22 Ultra’s display is. From its incredibly slim bezels to flaunting one of the brightest screens on any smartphone right now, this is probably the best display I’ve interacted with so far. Even better than my previous daily driver, the iPhone 13 Pro Max. So yeah, this display is just gorgeous—just look at the colors and contrast levels on it! Thanks to all these, this is literally my favorite mobile screen to watch content on. 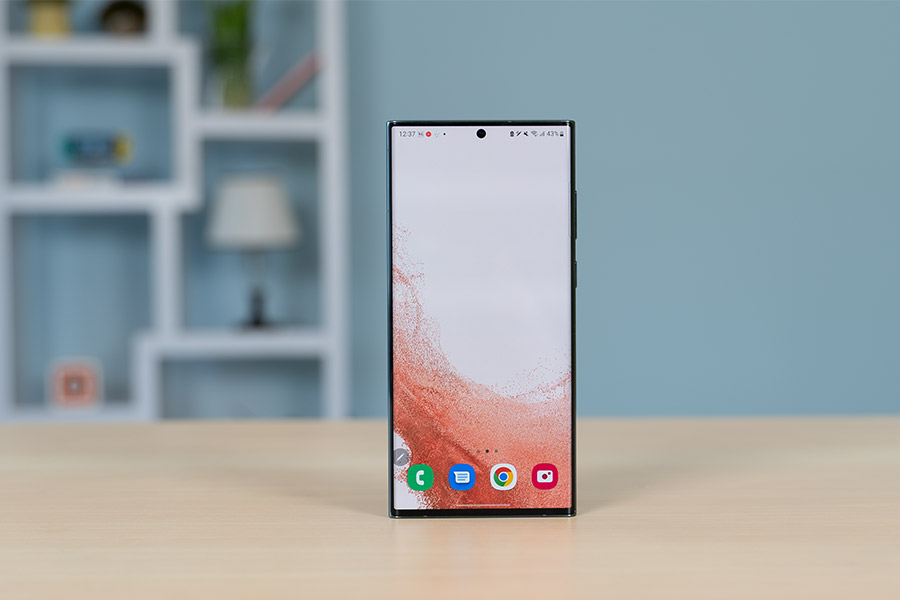 Plus, it has so many add-on features, like the extra brightness mode a.k.a Vision Booster that enhances the screen’s brightness, colors, and contrast levels under direct sunlight for clearer visibility. Then there’s the Extra Dim mode which helps reduce eye strain, especially for people like me who are guilty of using their phone under the blanket late at night.

Even interacting with this screen has been amazing, thanks to the excellent touch response and haptic feedback. As a result, actions like typing and unlocking the phone greets you with really refined vibration feedback, which has made my experience using this phone so much better. Talking of unlocking, the ultrasonic fingerprint sensor here is really fast, accurate, and reliable.

Here this awesome screen is also paired with an incredible set of stereo speakers. They’re loud, crisp, clear, and balanced. And like I said before, I’ve had a great time watching content on Netflix and especially listening to songs on Spotify on the S22 Ultra.

This phone is a stunner by its looks as well. And I gotta appreciate that even though this is a huge device, it doesn’t feel that uneasy to hold. But what I will say from experience is that this is definitely a two-handed device for people like me with tiny hands. And for all our female audience out there, the S22 Ultra probably won’t fit in a pant pocket either. 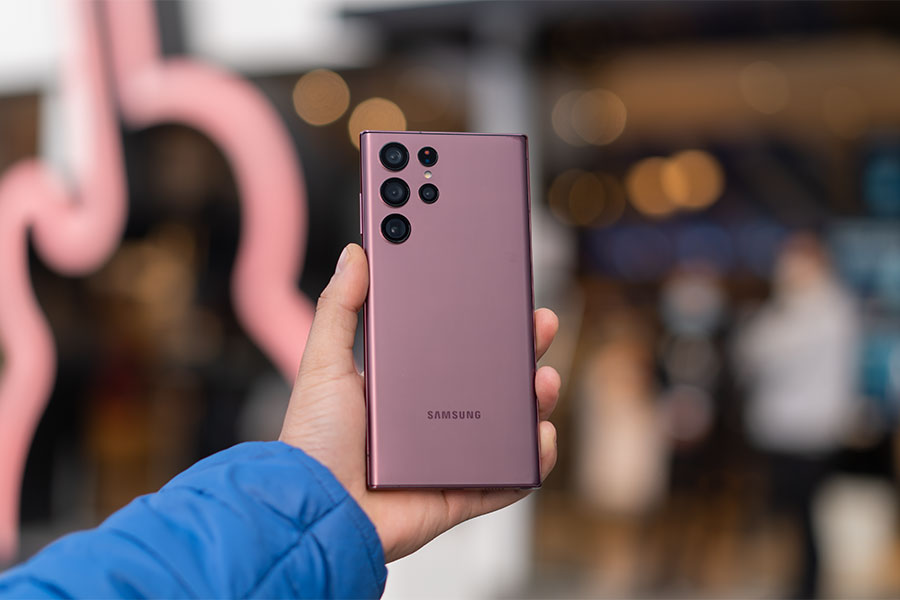 Just 2 months back, we made an entire travel video from this phone and throughout that trip, I had to carry my bag with me just to carry this phone. So yeah, if you are not into large phones, you should probably look into the S22+ instead, which arrives in a relatively compact form factor and is more or less a similar experience.

Moving on, in all these months that I used this phone without any cover or a screen protector, it’s impressive how the back of this phone doesn’t even have a single scuff. It’s as good as new! The front of it, however, has suffered a lot of tiny scratches, but nothing major. 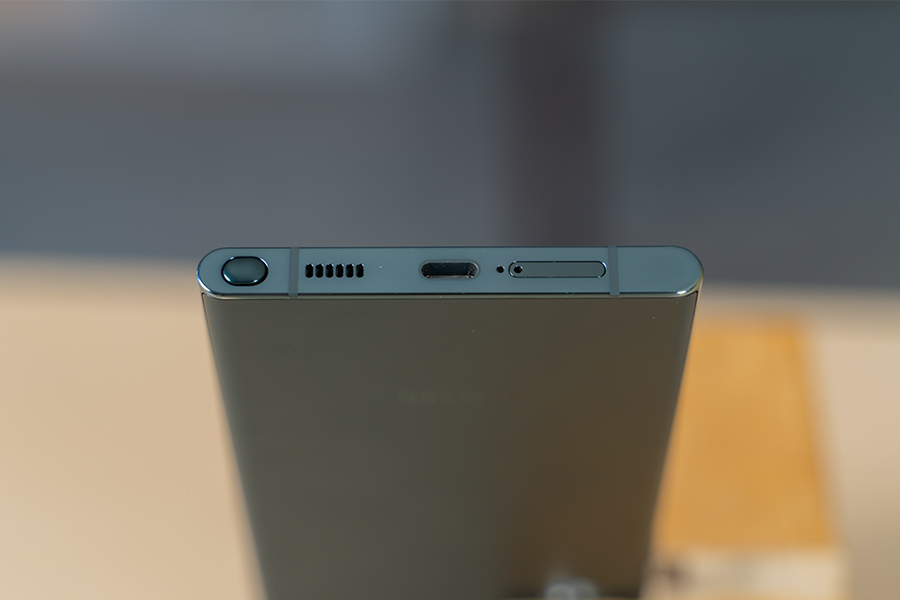 Still, I will definitely advise you to slap on a good case and screen protector here. That way, you can get a good after-sale value in case you decide to sell your phone later. Anyway, the one complaint that I’ve had with the S22 Ultra’s design is how easily dust gets accumulated on the camera array. And cleaning it—especially on the edges—is quite difficult. Another thing, while trying to achieve a boxy form factor, I feel like Samsung has made the edges a bit too sharp which could be somewhat uncomfortable at times.

Other than that, it’s quite appreciable how the company has focussed on the little things like the volume rockers and the power button has this really nice, tactile feedback. And I also like how the frames melt so seamlessly with the back and front of the phone.

Overall, this is a very well-built and well-designed phone to which I’m definitely giving a thumbs up. And, since Samsung has decided to merge its Note and S lineups, you get S-Pen compatibility on the S22 Ultra as well. 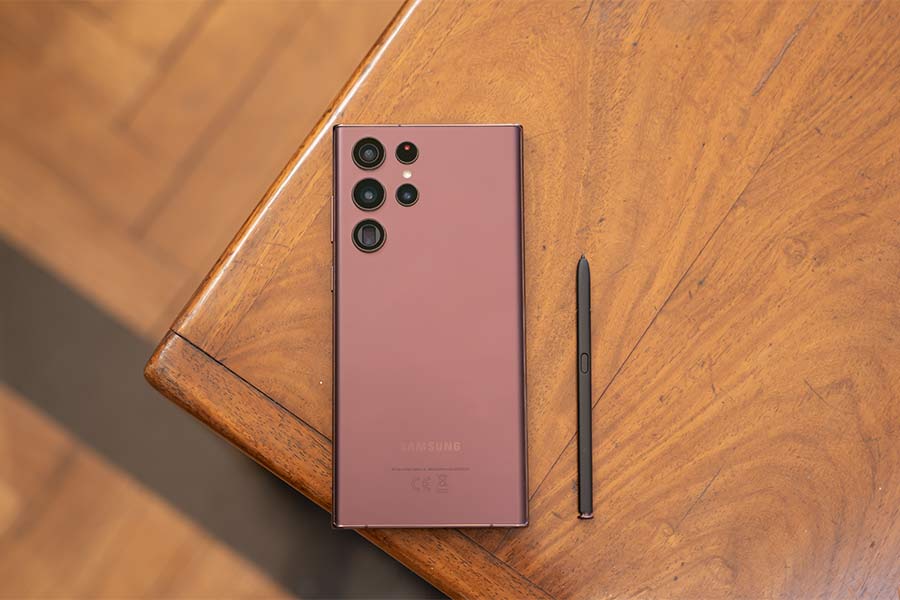 And let me be honest with you—I am not someone who uses the S-Pen a lot. But if you are an artist or an art enthusiast, you are certainly going to appreciate its extremely low input latency and precise tracking ability.

However, I found out that with other third-party apps like Evernote and Sketchbook, the tracking isn’t as good as on Samsung’s default note-taking app, which I think could be improved with future updates. But still, the S-Pen on the S22 Ultra is super responsive and comfortable to use.

Now, this is a thing that’s a little out of topic but sometimes when I am really stressed out, I would take the stylus out and start coloring using the Penup app, which is something that has been a great stress buster for me! 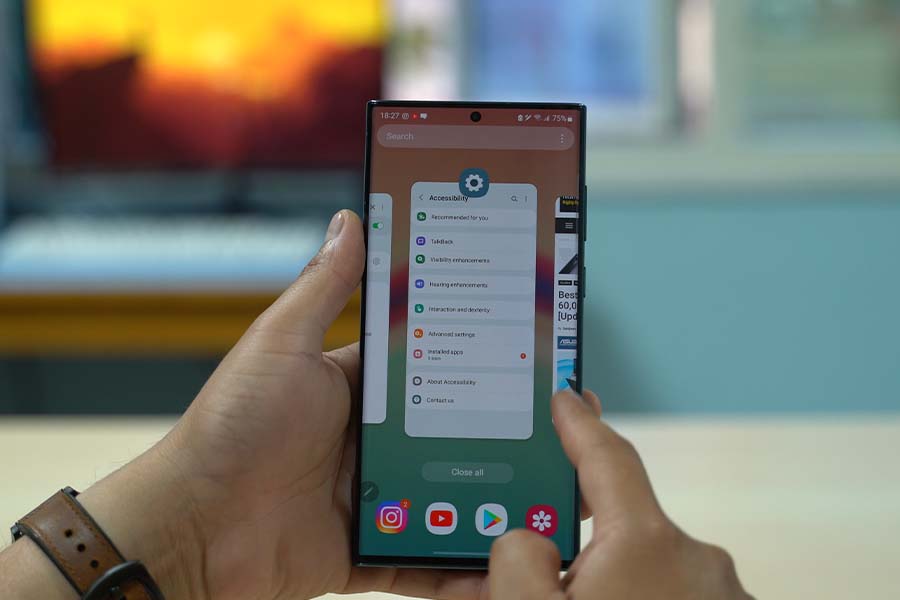 Alright, let’s talk about its performance now. And here too, I’ve had very little to complain about this phone. The S22 Ultra works flawlessly when doing regular everyday tasks and gaming on it has been a good experience too.

I think Samsung has implemented the Snapdragon 8 Gen 1 quite well here. I have used many phones with this chipset so far. And yes, they all heat up if you stress the CPU and GPU, but the S22 Ultra tries to remain cooler and more importantly, it cools down a lot faster as well.

As you can see from these charts, the gaming results on the S22 Ultra are quite impressive. You can play the most demanding games like Genshin Impact in their respective highest settings with minimum stutters, although you will notice some heating after about 20 minutes into the game. Other less demanding games like PUBG and Call of Duty play really well without lags and the temperatures remain in check as well.

On to the software side of things, I only have good things to say about it. If you have been following my channel long enough, you know that One UI is one of my favorite Android skins, maybe even the best after the recent OnePlus-Oppo merger. I love how simple to use and navigate it is; I love how Samsung has optimized the 120Hz refresh rate here so well, and how fluid and responsive the whole UI is.

And with Samsung’s 4 years of promised software and an additional year of security updates, it’s also almost on par with iPhone as far as software commitments go. So this is a pretty big deal for someone who owns this Android flagship!

And while I am talking about software updates, the latest March update has also enabled the option to turn off the highly controversial Game Optimizing Service, aka GOS. If you’re not aware, Samsung was accused of activating GOS to downgrade the performance of the S22 series while gaming to help the battery last longer and prevent overheating issues without the user’s permission. On the other hand, GOS would not be activated when running certain benchmarking apps. So, it was quite unethical to come from a brand like Samsung.

So among other things, I’ve been more than satisfied with its camera performance too. As I mentioned earlier, we shot an entire vlog with the S22 Ultra and found its photography as well as videography aspects to be quite impressive.

As you might know, Samsung’s default color optimization is not the most natural, but it brings out quite pleasing colors with almost no further edits required before uploading to social media.

But still, there are some things that I wished were better about its cameras. Such as, while taking portrait shots, I found the shutter speed on the S22 Ultra to be a bit slower, especially in comparison to the iPhone 13 Pro Max. So if you are taking a picture of a moving subject, chances are it might come out blurry.

Also, the phone uses its 3x telephoto lens for taking portraits by default, for which you have to move really far away from the subject, which has been a little inconvenient for me. I think I have started nitpicking at this point.

Finally, the battery life on the S22 Ultra has been a solid B+ considering all the heavy lifting that its 5000 mAh battery has to do like powering such a huge and high-res screen. I’m guessing that the fact that it employs the second-gen LTPO screen which can go as low as 1Hz has definitely helped with better endurance though. 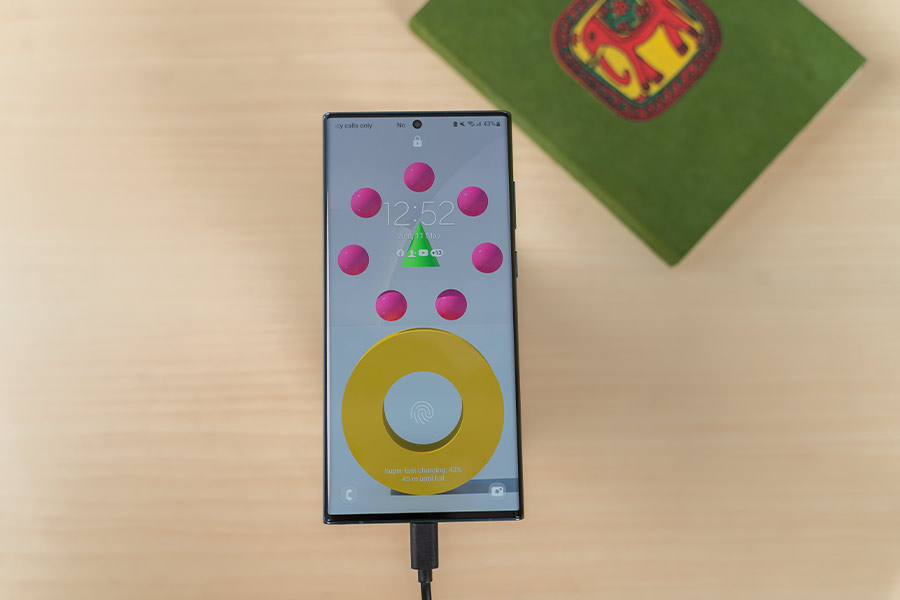 While it still doesn’t match the incredible battery life of the iPhone 13 Pro Max, on my typical usage, I would consistently get around 7 hours of screen-on time here. And in my usage, that converts to a full day of usage with around 10 to 15% charge left before I go to sleep.

Something that Samsung has also improved upon on this year’s flagships is the standby time. I recorded a maximum of just 1 to 2% battery drain overnight here, which is a huge improvement over the S21 Ultra which would lose 7 to 8% battery throughout the night.

Overall, these three months of using the Samsung Galaxy S22 Ultra for this review have been a great experience for me. Yes, it does have a BIG, boxy design that might not be everyone’s cup of tea. But if you can disregard that, and you’re looking to get the best Android smartphone money can buy, this one’s certainly the best choice and I will totally recommend it.

Yes, there are some things that I nitpicked about it in this review, but those are just a bunch of negligible aspects that I think you are probably going to overlook anyway.

Also, it’s no secret that Samsung’s S-Pen has a fanbase of its own. So if you want to buy a flagship phone that has a compatible stylus too, then this one’s the only reliable option out there. From providing the best display experience to maintaining a good balance of performance and cameras, the S22 Ultra is a phone that is very well put together, unless you want a smaller phone. In that case, the Galaxy S22+ is a solid offering too.