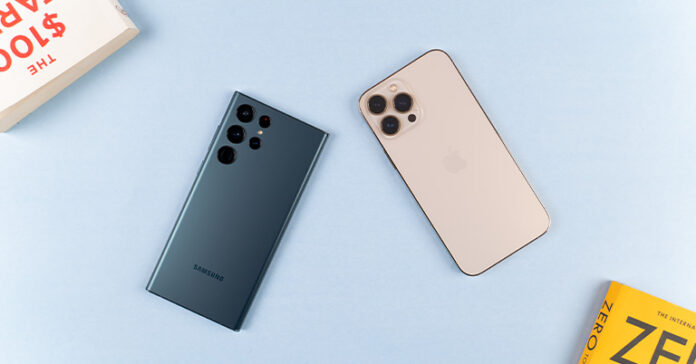 Galaxy S22 Ultra and iPhone 13 Pro Max are easily the hottest phones right now so we decided to put them to test for this gaming review. As we know, Samsung recently took the wraps off of the Galaxy S22 series. And frankly, the regular S22 and S22+ are a safe bet—yes—but they’re nothing extraordinary. The S22 Ultra though… yeah, the S22 Ultra is pretty special.

With the beloved “Galaxy Note” brand now officially dead and done for, it’s up to the Ultra to carry on that Note legacy, while trying to carve its own identity in the process. That sharp, boxy design that most people know and love is back in the S22 Ultra, and so is the S-Pen in its natural habitat.

But the reason this phone has that extra special sauce—at least in South Asian markets like Nepal and India—is that Samsung is shipping the Snapdragon variant this time around. Although the new Exynos 2200 promises a new legacy for Samsung’s in-house mobile chip division, early comparisons and reviews point to the same old story. But that’s not what we’re discussing today.

Instead, I’ll be comparing the Galaxy S22 Ultra with Snapdragon 8 Gen 1 against the iPhone 13 Pro Max in the gaming arena in this review.

Even without looking at all the benchmark and gaming results, many people would assume the iPhone to come out victorious in this battle, right? I mean, the A15 Bionic—despite the last-gen ARMv8 architecture—has been a proven performer. On the other hand, the new dragon already has a well-documented case of overheating and thermal throttling. Geekbench “swiftly” acknowledged this discovery by delisting the last 4 generations of Samsung’s flagship phones on its platform. In response, Samsung has promised a software update that’ll let users back in the driver’s seat to crank up the performance as they see fit. And that update has been slowly rolling out in different regions.

Anyway, let’s start with the good ol’ AnTuTu benchmark. Here, the S22 Ultra draws first blood with a score of over 900 thousand whereas the iPhone 13 Pro Max manages about 14% lower total. But as we all know, a single AnTuTu run isn’t really indicative of a phone’s gaming prowess or performance under stress. So I also put these two under 5 consecutive AnTuTu cycles which lasted for about 50 minutes. As you can see, the S22 Ultra still posts higher scores.

However, the iPhone delivers a much steadier result with just a 6% performance drop between the first and fifth run—while that number comes to roughly 10% on the S22 Ultra. By the way, I ran these tests under the “Optimized” processing speed on the Ultra.

But even when switching to the “Maximum” profile, I didn’t find a substantial performance jump here. It did manage somewhat better performance endurance throughout the tests but this can almost be dismissed as a simple run-to-run variation. Moving on, our 3DMark Wild Life Extreme Stress Test shows superior performance and stability on the iPhone as well.

The S22 Ultra’s performance dip was quite significant in our GFXBench stress test too where the iPhone’s 10th loop score is similar to the 1st loop score of the Ultra! Despite this, I found the surface temperature on both these phones to be quite identical.

On to the gaming side of things, allow me to kick things off with Genshin Impact. Before getting to the actual gameplay itself, let’s look at how this game treats these two phones—or better yet, these two platforms—based on the settings.

When selecting the “Highest” graphics quality, the iPhone keeps the Visual Effects to “Highest” while the S22 Ultra keeps it a step below. There’s a similar difference under the “High” preset too. Moreover, the game shows a “Smooth” performance load on iPhone 13 Pro Max whereas the S22 Ultra is “Overclocked” here.

So for a fair comparison, I kept both phones in the same settings under every parameter. At “Highest” graphics quality with 60 fps on and motion blur turned off, the S22 Ultra kicks off to a decent 50-55 average fps for the first 5 minutes into the game with 96% stability.

During this period, the phone doesn’t get that hot either—and the CPU/GPU usage hovers around the 73/76% mark only. Yet, after 20 minutes or so, the frame drop is quite significant since the average fps falls by a whopping 35% to just 35-41 fps. At this point, I logged its surface temperature at 38.5 and 36.2°C on the front and back of the phone, which is surprisingly better than what I was expecting, to be honest.

Looks like Samsung’s redesigned cooling system for the S22 Ultra works its magic just fine. To compare, the iPhone was slightly hotter in this instance. But the bigger thing to understand here is where the heat is localized on these phones.

The iPhone mostly dissipates heat on the 1/3rd portion of the phone near the camera module—while the rest of the chassis remains comfortably cool enough. On the contrary, the S22 Ultra is warm throughout the chassis, with the upper 2/3rd portion getting considerably hot. The iPhone 13 Pro Max also delivers a more stable 56-60 fps gameplay in the first 5 minutes while settling to 44-51 fps after 20 minutes.

Bringing it down a notch to “High” graphics, the S22 Ultra maintains a comparatively steadier result with around 50 fps average throughout the gameplay.

Under this, the phone stays a couple of degrees cooler too. But the iPhone 13 Pro Max is once again the superior of the two as it gives a steady 58-60 fps in the first 10 minutes of the game while being subject to minor, negligible frame drops a few minutes later.

On to some relatively less demanding games, PUBG Mobile plays without any trouble at the highest settings on the S22 Ultra. I got a stable 40 fps with practically zero frame drop even after 30 minutes into the game and the phone didn’t get that hot either.

For a smoother gaming experience, switching to HDR graphics and Extreme frame rates does the trick. As expected, the phone keeps up the 60 fps gameplay through and through without any stutters or anything. iPhone 13 Pro Max manages a similar result at both settings but surprisingly enough, it even jumps to the 50 fps mark every now and then at Ultra frame rate.

Call of Duty is also a smooth 60 fps sailing on either phone at the highest settings. This game doesn’t quite bother the S22 Ultra’s Snapdragon 8 Gen 1 as well since the CPU/GPU usage here never climbed above 60 and 48%.

It’s the same with the iPhone too where the average CPU and GPU usage hover near 50% only. Additionally, both phones maintain an exceptional surface temperature on COD Mobile—never going beyond 34°C on either side.

I also played Brawlhalla on these phones—which is yet another game that’s easy on the processor. Needless to say, the S22 Ultra and the iPhone 13 Pro Max handled it without breaking a sweat—all the while maintaining excellent temperatures.

Asphalt 9 was an interesting test though. The iPhone even has the 60 fps option unlocked whereas the S22 Ultra is limited to just 30 fps. And under the 60 fps mode, the iPhone manages a stable 60 fps gameplay but it does get slightly warm after 6/7 minutes into the game. Then again, it’s nothing concerning, seriously.

When dialing it down to 30 fps, the phone still pushes 45-60 fps occasionally but the average fps ultimately comes in the ballpark of 30 fps.

Likewise, the S22 Ultra also gives a steady 30 fps but I really wish Samsung had worked with the devs to enable 60 fps gameplay on its latest flagship device. I mean… it’s almost embarrassing to be content with 30 fps gaming on such a high-end phone, no?

Nevertheless, things take a turn in Samsung’s favor when it comes to high fps games. Both Injustice 2 and Critical Ops max out at 60 fps on the iPhone while the S22 Ultra handles either game at their highest settings under 120 fps. Still, I did notice minor frame drops on Injustice 2 after about 15 minutes or so.

Critical Ops resulted in a similar experience as well—with a slight frame drop from 120 fps on the S22 Ultra after some time—whereas the iPhone delivered a stable 60 fps without any hiccup. Even though the 120Hz ProMotion display on the iPhone 13 Pro series is a pretty big deal, Apple hasn’t been able to extend the smooth capabilities of this tech to the majority of third-party apps as of yet.

To note, Critical Ops does have the 120 fps option in the settings—despite the gameplay suggesting otherwise. But this should soon be a thing of the past since Apple has introduced 120Hz refresh rate support for all apps with the new iOS 15.4 update. And you know… the developers have to optimize their games to take full advantage of the 120Hz display too.

Moving on, I also played a couple of emulator games on the S22 Ultra. I wanted to try it out on the iPhone as well but I couldn’t find any emulator on the App Store. And the ones that could work either needed a jailbroken device or had to be installed from a third-party app store like “AltStore”. But for privacy and security reasons, I opted out of both options.

As for the S22 Ultra, I used the PPSSPP emulator to play God of War (Ghost of Sparta) and Tekken 6. Keeping the render resolution at 4x, I enjoyed a smooth 60 fps on both games. The phone is subject to some jitters under a heavy attack sequence or when there are multiple NPCs on God of War though.

Looking at the frame rate chart, we can see the game dip to as low as 48 fps under the aforementioned conditions—while the spikes are when I purposefully sped up the cutscene.

Moreover, the CPU/GPU usage here maxed out at 46 and 92% despite more than comfortable temperatures throughout my gaming session. On the other hand, Tekken 6 renders a steady 60 fps gameplay without any trouble. After 30 minutes of gaming, the S22 Ultra’s surface temperature clocked at just 33°C, which is all the more commendable.

Wrapping it all up, I guess it’s plain as day that the iPhone 13 Pro Max is still superior to the Galaxy S22 Ultra when it comes to gaming. From better fps stability to cooler temperatures, the iPhone wins this battle quite comfortably—especially in terms of resource-heavy games like Genshin Impact.

Although the S22 Ultra could eke out higher fps once the fix for GOS performance throttling arrives, the laws of physics are still against Samsung’s odds since higher performance requires more power—which means more heat. 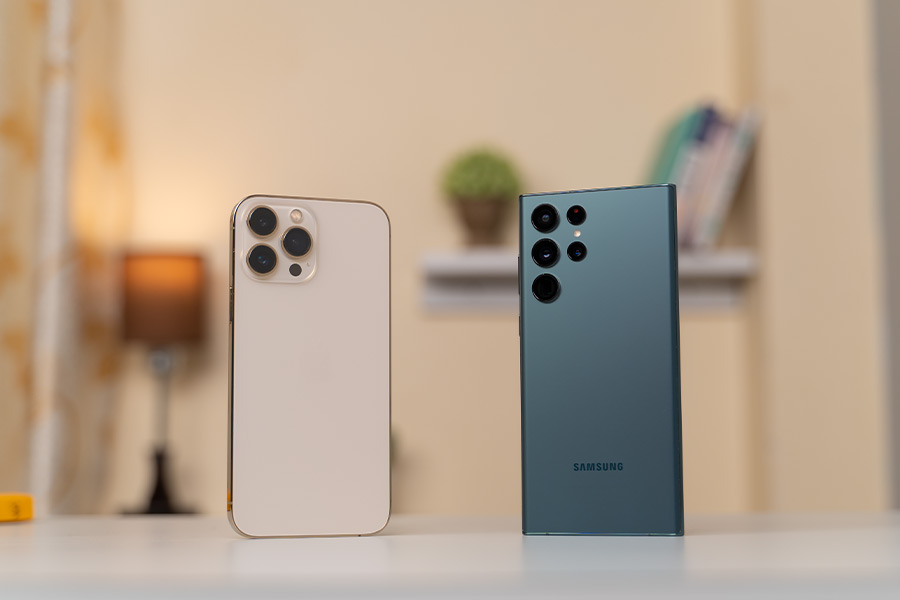 And ultimately, the phone is bound to throttle performance if the cooling solution isn’t well-equipped to handle all the heat—literally. Mind you that all our tests have been conducted during this favorable chilly weather and things could easily go downhill come summertime. Besides excessive heat, using up more power also means faster battery drain. So… maybe don’t play demanding games at max settings? I don’t know.

Efficiency is equally as important as powerful

Then, what are the broader findings from this test you ask? Well, instead of gunning for sheer performance, Qualcomm and Samsung should’ve prioritized power efficiency like Apple did with the A15 Bionic. This also points towards worse performance yield and heating issues in Samsung’s 4nm node which has prompted Qualcomm to shift to TSMC’s 4nm process for 8 Gen 1’s successor.

Like I mentioned earlier, the Exynos 2200—despite all the “AMD partnership” hype—has pretty much been a no-show either. At this rate, the performance gap between the latest Android and iOS smartphones will only get wider if chipmakers can’t keep up with Apple. And that’s ultimately bad for the end consumers—Android consumers, that is.