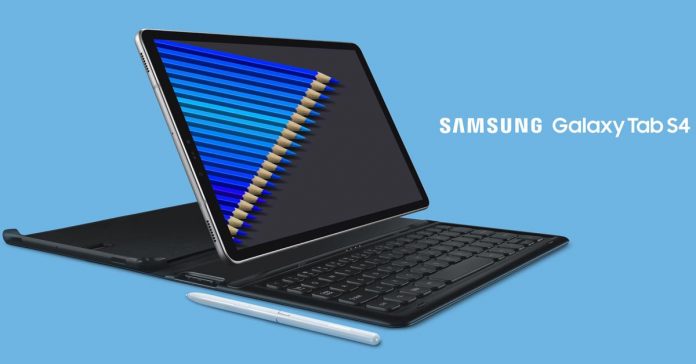 The smart tablet market has been dwindling for some time, yet it hasn’t stopped companies from coming out with newer tabs. And so, Samsung has released a successor to its last years Galaxy Tab S3, with quite a few improvements – in about almost all aspects. The new one is called Samsung Galaxy Tab S4, and its set to be Samsung’s greatest in its tablet lineup. But with its features, it looks like Samsung is heading towards an Android laptop!

Compared to last year’s Galaxy Tab S3, the Galaxy Tab S4 is bigger, more powerful, has bigger storage, better camera…well, you get the picture. First off, you’ll notice its bigger screen, with seriously thin bezels! The design is glass front and back, with a metal frame. It features a 10.5″ AMOLED display with 2560 x 1600 resolution in a 16:10 aspect ratio. It seems Samsung’s done everything to maximize your media consumption experience, bringing in last year’s AKG’s Quad-speakers, this time, with improved Dolby Atmos surround sound support.

The primary camera stays the same at 13 MP and it’s 4K video recording enabled. The front camera is now 8 MP, which can record Full-HD videos. The highly slim bezels mean no more fingerprint sensors, as the tablet unlocks with Facial recognition, combined with Iris Scanner. I think that the fingerprint sensor would’ve been more convenient…but maybe Samsung decided to jump on the trend.

Inside, a Snapdragon 835 chipset with 4 GB RAM powers the tablet, and it should be good enough. Storage options have improved, with the baseline model being 64 GB. A microSD card option is always there, but you can also get the 256 GB model as well. You can also choose between a SIM-variant or a normal one as well, depending on your needs.

But what makes this tablet close to a laptop is its Dex-enabled! You can get a laptop experience on it with keyboards, monitors, and everything, but it does fall short of a real laptop. Yes, you can simply plug it into your Dex, and voila! You have an Android laptop. The Dex can also let you connect a monitor, improving your workspace. And since you can connect a wireless mouse to it easily, it’s more like a desktop experience than a  tablet one. Also, the S-Pen adds more to the experience, by making the navigation smoother and easier. With Microsoft apps pre-installed on it, it’s clear that this is designed for commuters and to make you more productive in a sense.

The Galaxy Tab S3 cost around Rs.83,500 in Nepal when it came out. And this one, by the looks of it, might be more expensive! The baseline model of 64 GB is set to be priced at $650, without the keyboard cover, or the Dex. You’ll have to make quite a dent in your pocket if you want to have the full laptop wannabe experience, it seems. So, what do you think of the new Samsung Galaxy Tab S4? Will you buy it if it launches in Nepal? Do let us know.