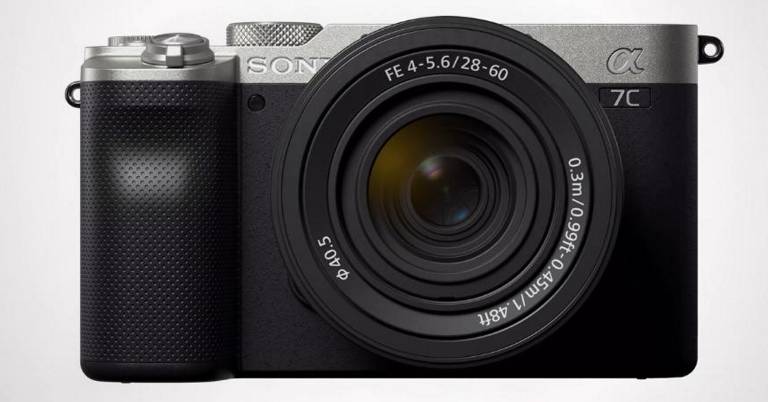 Typical full-frame cameras are rather bulky and heavy. Because of this, portability has been a major area of complaint about such a category of cameras. Last year, Sony introduced the Alpha 7C (a7C) as a solution to this problem. The company even called it “the world’s smallest and lightest full-frame camera” – with In-Body Image Stabilization (IBIS) at its launch. The camera is finally coming to the Nepali market. So let’s discover more about the Sony a7C including its features, expected price in Nepal, and availability.

Here, the Sony a7C looks similar to the a7 III (not to be confused with a7S III) or the company’s APS-C cameras like the Alpha 6600. Measuring just 4.88 x 2.80 x 2.35-inches and weighing 509 grams (with battery and memory card), a7C is about 19% smaller and 22% lighter than the a7 III. The body of the camera is made of magnesium alloy. Complementing the compact body, Sony also unveiled the new FE 28-60mm f/4-5.6 kit lens that it calls “the world’s smallest and lightest full-frame zoom lens”.

It has a 0.39-inches XGA OLED electronic viewfinder with 2.35m dots, 100% field coverage, and 0.59x magnification. Similarly, there’s the 2.95-inches adjustable-angle (with an approximate rotation angle of 270-degree) TFT monitor. It supports touch shutter, touch focus, and touch tracking. In terms of wireless connectivity, it supports dual-band WiFi (2.4, 5 GHz) and Bluetooth 4.1. Moving on, you can find one UHS-II SD card slot, one USB-C Type 3.2 (for power and data transfer), a micro HDMI, and a separate microphone and headphone jack. Its high-capacity NP-FZ100 battery lets you capture 740 images or up to 215 minutes of continuous video recording.

Sony a7C features the same 24.2MP 35mm full-frame Exmor R CMOS sensor with a BIONZ X imaging processing engine like the a7 III. It has a 15-stop wide dynamic range and a 5-axis image stabilization. This camera can continuously shoot at up to 10fps with AF/AE tracking and up to 8fps in live view mode.

As expected, the a7C has an incredible low-light shooting capability with a standard ISO range of 100 – 51,200. Sony also employs noise reduction technology to enhance details in nighttime shots. It supports 16-bit processing and 14-bit RAW output too. Moreover, it can shoot up to 223 JPEG (Fine L), 115 compressed RAW, or 45 uncompressed RAW images in a single continuous burst.

In terms of autofocus, the a7C has AI-based real-time tracking for fast-paced subjects. Matter of fact, it has the same AF technology as Sony a9. The a7C has 693 phase-detection and 425 contrast-detection AF points covering about 93% of the image area.

If you recall, the recently launched Panasonic Lumix S5 mirrorless camera (which is one of its closest competitors), only has a DFD system. Additionally, for better focus, it uses real-time eye AF that works on both human and animal subjects. There’s also a dedicated AF-ON button to easily activate real-time AF.

Moving on to the videos, the Sony a7C maxes out at 4K/30fps (or 24fps) or 1080p at up to 120fps with full pixel readout. Thankfully, these don’t have any time restrictions. However, Sony should’ve at least gone with 4K/60fps recording. Anyway, both these formats are limited to 4:2:0 8-bit and 100Mbps bit rates. It supports HDR (HLG) and S-Log 3/2, S-Gamut profiles for adjusting the dynamic range.

Sony a7C compact full-frame mirrorless camera is now available for pre-order in Nepal from Sony Centers located here. You will get the Sony a7C bundled with the 28-60mm zoom lens kit for a price of NPR 2,90,000.